Don’t call it a sequel

In the interview Linzner also revealed that while they had to sacrifice things such as resolution in order to make Fast Racing Neo run at 60 frames per second (it was in 720p), they were able to make Fast RMX run in 1080p at 60fps even in four-player split-screen (which ran at 30fps in Neo).

To utilize the new platform’s superior hardware, they have enhanced the lighting and “special effects” on all tracks including those brought over from Neo. Options for Dynamic HDR Exposure and Chromatic Aberration have also been added, the latter to “emulate how real lenses work on cameras and gives a nice touch of realism to the image.”

Linzner and Shin’en want to implement the new HD Rumble technology to “give you the impression you are really on the track.” They are adding special vibrations when you drive over boost-pads or launch from a jump-pad, for example. The Joy-Con will also rumble in specific places according to where you hit something. Being able to “feel where it happened in regard to your vehicle,” Linzner suggests trying to play with your eyes closed. 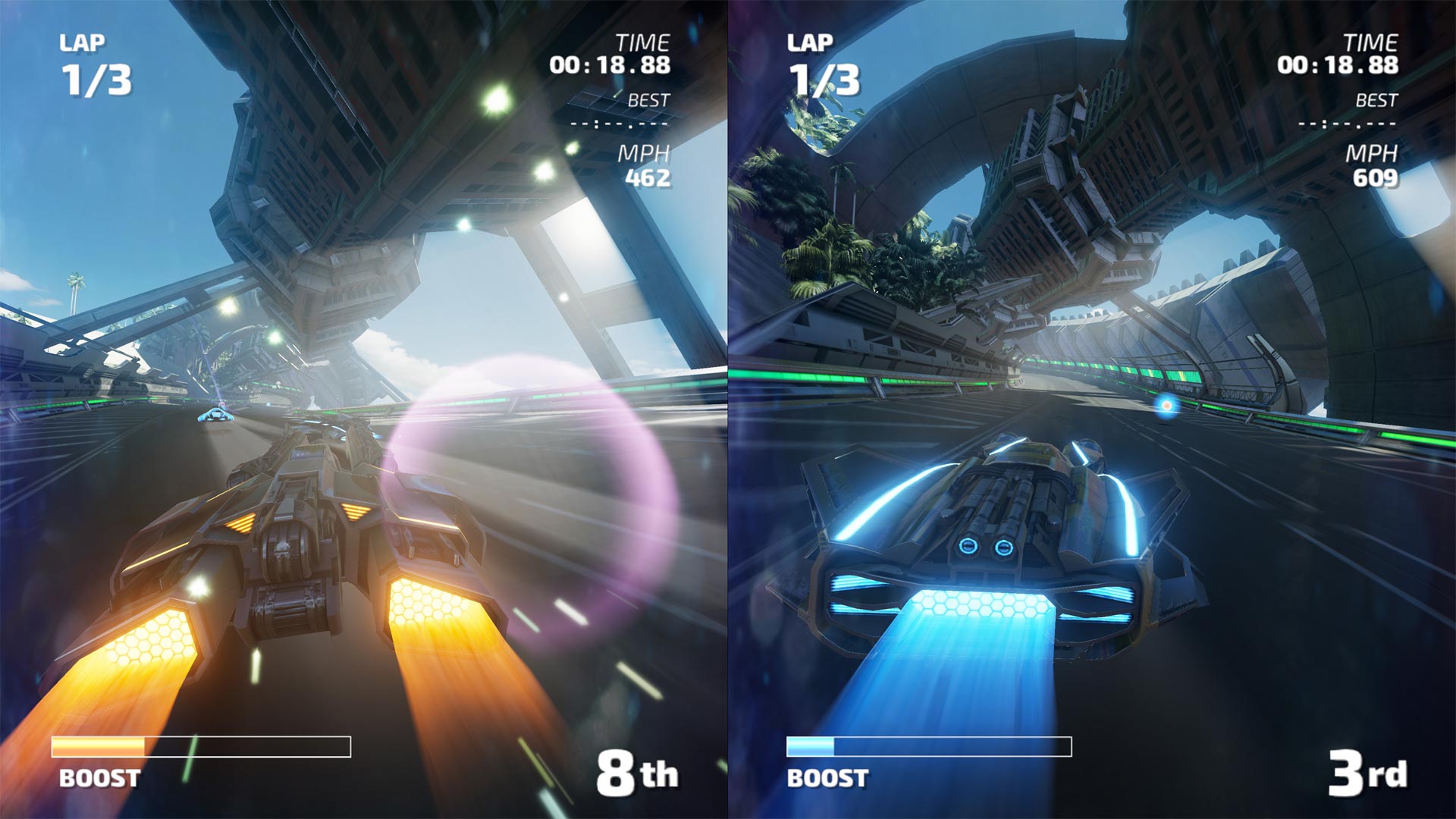 I can definitely feel where things hit my car if I go out and drive with my eyes closed, but it doesn’t mean I’d be able to make it down the street! Jokes aside, all these enhancements sound nice, except perhaps chromatic aberration. The term “camera” is used in third-person 3D games, but I don’t actually imagine that there is a camera through which I’m seeing the world outside of games like Outlast.

That includes Super Mario 64 with Lakitu and his camera, who was used to get gamers used to the idea of adjusting their view manually in 3D environments. Nintendo didn’t mean to literally imply that 3D third-person games should be like we are literally looking through the lens of a camera. Unless exaggerated for stylistic means, the image should be as clear as possible. At least it’s an option that can be turned off, but I can’t imagine why anyone would want that.

Shin’en has danced around questions of whether it’s a sequel or an upgrade, but it sounds more like the latter with the word “remix” being tossed about (RMX…remix…). Of course it’s weird to call racing games that lack story “sequels,” but it would be nice to have an official word saying “hey this game has everything Fast Racing Neo and/or Fast Racing League had, so you can skip those and just play this one.” It’s known that tracks from Neo will appear in RMX, whose 30 nearly double that of Neo‘s 16 (before DLC), but it has not been explicitly stated how many of those are being brought over and how many are new, or which ones for that matter.

Fast RMX truly looks fantastic, but I’m hesitant to buy any games in the series without clear knowledge of how much content from Neo is included and thus whether or not I’d be missing out by going straight to RMX.