Far Cry 3 has been accused of racism, sexism, and relying too heavily on exploitative narrative tropes. Lead writer Jeffrey Yohalem, however, thinks the critics have missed the point, and told Penny Arcade that Far Cry 3 is supposed to be a commentary.

“It’s set on an island in the South Pacific, so immediately the thing that comes to mind is the white colonial trope, the Avatar trope,” he explained. “I started with that, and it’s like, ‘Here’s what pop culture thinks about traveling to a new place,’ and the funny thing is, that’s an exaggeration of most games, they just don’t expose it.

“For example, GTA is a colonization game. You come to New York, you colonize New York. Most open world games function that way. Ezio comes to Rome and colonizes Rome. To take that to its extreme, exaggerating those tropes is how you reveal them. The exaggeration of that trope is what happens in Far Cry 3.“

In my own review for the game, I found the story relatively inoffensive and stylishly presented, but did point out that it veers dangerously into “Mighty Whitey” trope territory. Far Cry 3‘s story is basically about an inexperienced young white man coming to a tropical island and being better at the natives’ way of life than they are in a matter of days. It’s a cliche that’s ripe for satire and commentary, but the problem is — Far Cry 3 really doesn’t do that, despite the writer’s claim. 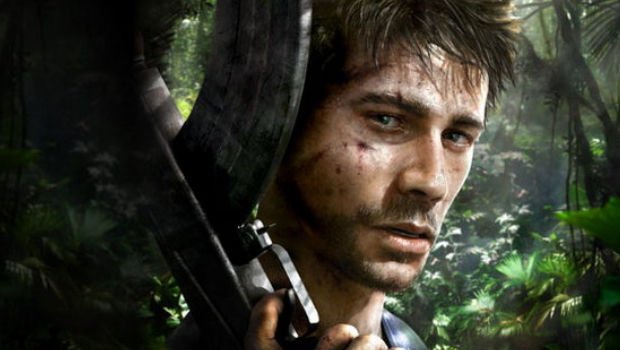 If Yohalem wishes to insist his story is supposed to be an exaggerated commentary, he’s going to have to come to terms with the fact that he’s not a very good commentator, because Far Cry 3 comes off as quite genuine and clearly acts like it wants to be taken seriously. Far Cry 3‘s plot never distinguishes itself from any other open world game, and not once did I ever get the impression it was trying to be more than a straightforward — albeit slickly produced — adventure story.

That’s fine, and I wasn’t offended by any of the game’s narrative elements, but if it was intended to “exaggerate” anything, it failed. Given how ridiculous videogame stories generally are, Far Cry 3 needed to go way further than it did to expose the stupidity of the genre. Compared to something like Saints Row, the game’s writing is tame. I’d argue Volition’s done a lot more to expose the silliness of open world games, and when you compare it to Far Cry 3‘s effort, Yohalem’s statements come off as disingenuous, attempting to answer criticism with excuses after the fact.

“When you’re with Citra in front of the warriors, that’s Jason’s fantasy, you know the white guy from LA has sex with this beautiful woman, it’s very gratuitous, and it’s in front of the whole tribe,” Yohalem added. “It’s a fantasy that we’ve seen in pop culture cinema.

“What I didn’t expect was the people who half-listen. If you half-listen to the story, it seems like it’s reinforcing tropes that I disagree with.” 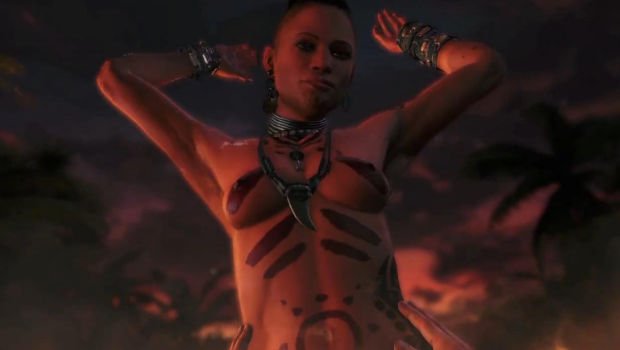 The above quote is a perfect example of my problem with the writer’s argument. Yes, the sex scene with Citra is a gratuitous fantasy — but in an industry where gratuitous fantasy is the norm, presenting this scene without any added irony or commentary just comes across as yet another pointless sex scene in a world full of pointless sex scenes. It appears cynical, not satirical. As he says, it’s a fantasy we’ve seen in pop culture cinema, but it’s recreated so faithfully in Far Cry 3, it cannot be considered as exaggerated — it’s just another example of the trope.

Not once is there a shred of dialog or a visual cue to clue the audience into the idea that this is the protagonist’s personal fantasy. Jason never says this. He never indicates beforehand, even briefly, that his dream is to shag a priestess in front of a crowd. It just happens, with a muted seriousness. In simply presenting the scene without added commentary, it looks like the writer‘s fantasy, not the main character’s. It’s sex for sex’s sake.

Again, if that’s what Far Cry 3 wanted to do, then whatever — but implying now, weeks after release, that we’re ignorant for not “getting” it, is offensive. I assert there’s nothing to get. The videogame industry is not known for its subtlety, so if you set out to criticize, satirize, or otherwise comment on the medium’s tropes, you’re going to have to work hard and communicate it clearly. You don’t get to act better than your peers by simply saying you are. You have to actually be better, and Far Cry 3 is not better.

It reminds me of the “satire” seen in The Simpson’s Game, released a few years ago. This is a game that set out to parody problems in videogames by simply including the problems within its gameplay. It would give you tired and repetitive block puzzles, but excuse the lack of inspiration by having a character quip about how tired and repetitive the block puzzles were. That’s not how it’s meant to work — simply acknowledging how bad your game is doesn’t work as satire. There’s no difference between your “parody” and any other game with mediocre block puzzles — the result is still the same, as players are being bored by insipid gameplay no matter the stated intent.

Game developers often think that, if they point out their own flaws, they’re allowed to keep them. Having an RPG character make fun of fetch quests isn’t a joke if you’re going to lazily make the player do the fetch quests anyway. It’s just insulting — it comes off as a developer admitting they know how lame their gameplay is, but isn’t interested in doing a thing to change it.

This is what Far Cry 3 did from a narrative perspective. In acknowledging these tropes, the lead writer admits he knows what’s wrong with his game. However, by simply presenting these tropes with a straight face, he’s not managed to make any kind of creative statement. He’s fallen into the trap of simply being the thing he’s trying to criticize. Or at least claims he’s trying to criticize.

I maintain that Far Cry 3 is a great game, and I think its story is okay — notable more for its superb voice performances than anything else. However, to suggest its critics didn’t “get” the game, when it presented nothing to get, is both misleading and insulting. The justifications for Far Cry 3‘s plot actually serve to make the game look worse, because now it’s not just a big dumb action story — it’s a big dumb action story that failed to be a smart and cutting observation of the industry.

Frankly, it would’ve been better if  Jeffrey Yohalem had cashed in his chips while he was ahead, rather than take this PR gamble. Better to be known for writing a successful escapist’s fantasy, than writing a failed indictment of it.