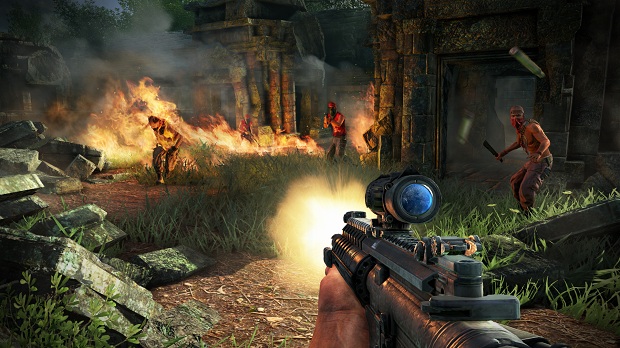 Far Cry 3 might have been one of last year’s biggest surprises, what with its return to the tropical setting of the original and its late-in-the-year release. Despite the seemingly ham-fisted approach to gaming satire, its open-world chaos was really compelling. If you’ve been left wanting more Far Cry 3 then this new DLC bundle will help fill that void.

The Deluxe Bundle DLC pack is out now for Xbox 360, PlayStation 3, and PC and contains the DLC from the Deluxe Edition of Far Cry 3: six single-player missions, new weapons for both the single- and multiplayer parts of the game, new animals to hunt, plus a new character Hurk who is accompanied by his bomb-carrying monkeys. Which is something I really want to see.

Also included in the bundle is the soundtrack for the game and a digital art book. The Deluxe Bundle will cost $9.99 on PSN, 800 Microsoft Points on Xbox Live, and $9.99/£6.99 on Steam. Adding some new missions into the single-player is going to help extend the game for sure; anyone buy the digital deluxe version at launch? What did you think of the extra content you got — is it worth the extra cash?