Get the most out of Rex Colt

Far Cry 3: Blood Dragon came completely out of left field and blindsided us all. Jim and I have been powering through the massive wave of 80s and 90s nostalgia this past week, and to help you out, I’ve written up an Achievement/Trophy guide to help you conquer everything the evil Colonel Sloane will throw at you.

If you remember a time when the VHS tape was king, one-liners were the only way to talk, and Arnold was the undisputed action hero champion, then by god it’s time to strap yourselves in for a blast from the past. 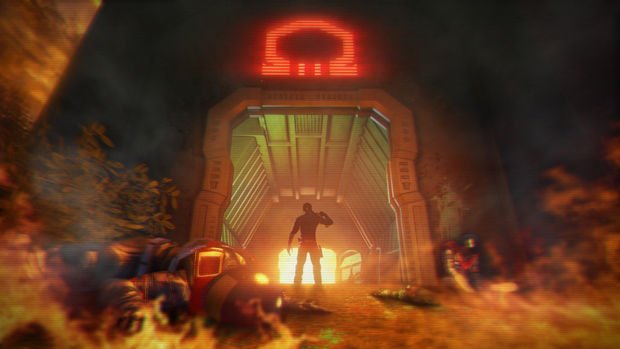 Finish all the Garrisons

This will pop once you’ve captured all 13 bases in the Blood Dragon map. Like Far Cry 3 proper, sneaking into a base and using the alarm will stop all reinforcements. The best way to take a base is to use a silenced weapon, or simply use the bow, which is one of the strongest anti-infantry weapons in the entire game.

If you want to have a bit of fun, locate a Blood Dragon, and when the “Dragon” lifebar appears in the top right corner, you can lure it to a base with a cyber heart (which you can earn by looting corpses).

Finish all the Predator’s Path Quests

As you liberate Blood Dragon’s Garrisons, you’ll unlock new Predator and Hostage quests. Simply liberate the bases and kill the appropriate enemies highlighted on your quest tracker to finish these. If you’re gunning for the “kill all animals” quest, make sure you do this in tandem, as they link up on occasion.

Finish all the Hostages Situations

As you liberate Blood Dragon’s Garrisons, you’ll unlock new Predator and Hostage quests. As is the case with sneaking into Garrisons, use the bow to best these missions, or sneak up from behind and slice them with your combat knife (click the right stick).

If you make the enemy aware of your presence, they will execute the hostage, so be sure to stay low. The easiest way to complete these is to come back after clearing the game and obtaining a number of upgrades, such as the “move faster while crouched” power.

Kill all the Animal Types

Animal locations will show up on the map like Far Cry 3. Use the Predator missions to clear a lot of these, or seek out the animals for yourself. When you enter the “Test Your Might Arena” area later in the game (you’ll know it when you see it), make sure you shoot the crocodiles in the water for an easy tag. The snake will be the hardest one to find — stay vigilant when looking at the ground in areas where snakes jump out at you from the grass.

Braincages are the mind-controlling helmets found on certain Blood Dragons, usually near Garrisons. The easiest way to get this Achievement/Trophy is to capture every Garrison — eventually while engaging in this series of quests you will find five mind-controlled Dragons sitting out in front of select bases. Keep in mind you’ll come across a couple of them through the campaign as well, which makes this a great post-game Achievement/Trophy.

Kill a Dragon with the Bow

This one is much easier than it sounds. All you have to do is get a Dragon down to near minimum health, then finish it off with a bow. It’s a lot easier if you barricade yourself in a building with a vending machine, so you can continue to buy arrows while you slowly whittle it to death by shooting its chest. If you need to, lure the Dragon into said vending machine area after you have captured a Garrison. The top left-most Garrison is great for this.

Don’t bother going out of your way for this Achievement/Trophy at first. You will kill a dragon as part of the required main quest, about halfway through. To kill a Dragon in general, the best method is to blast them in their chest as they raise up to eye-beam you. Use your cyber hearts (left direction pad) to distract them. It’s also easier to take them down in a base, with a mounted gun, and infantry distractions.

Save this Achievement/Trophy until the end of the game, when you unlock the final secret weapon. It will toast Dragons in mere seconds, leaving you free to roam the countryside and wrack up easy Dragon kills while you look for collectibles.

What are You Reading For?

Find all of Dr. Carlyle’s Notes

The Greatest Format of all Time

Hail to the King

This, in all likelihood, will be the last Achievement/Trophy you earn. Through clearing Garrisons, completing the story, beating Hostage and Predator missions, finding collectibles and killing enemies along the way, you’ll hit level 30. If you need more of a boost, beat the game and farm Dragons with the secret final weapon — they’ll earn you 5000 XP each.

After saving Darling, enter Combat Mode with a Dragon and Return to Stealth

This one is self explanatory. All you have to do is get the Dragon’s attention (shoot it or just run near it), crouch (B or Circle), and duck behind a corner. The Dragon will go back to normal and the Achievement/Trophy will pop. You might not even notice it.

Own all Weapons Attachments

In order to earn every Weapon Attachment, you must complete all of the Hostage and Predator missions, as well as gather a certain amount of collectibles to unlock the ability to purchase the rest. In order to see your unlock progress, use the status screen. To gather the cash to buy them, use the chest scattered about the world as you’re hunting down the collectibles.

Jump Down from 50 Meters

You will unlock this achievement automatically through story progress.

The Drug of the Nation

Find all TV SETS to Decrypt the Hidden Message

The Only True Stopper

Headshot Every Type of Enemy

This one is self explanatory. The best way to achieve this is to use the bow and go for a headshot, as most enemies are vulnerable to a one-shot kill. If that fails, use your shotgun, or an upgraded gun to blast their faces off.

This is one of the only Achievements/Trophies that you need to make a mental note of, as some enemies respawn at a lower rate than others. It’s important to get a headshot on every new enemy you see, so making a checklist is a great idea — for reference, there’s one enemy type for every weapon in the game, excluding the final weapon.

Animal headshots are not required.

Welcome to the Party, Pal

This is earned through story progress near the beginning, as soon as you gain control of your character.

Earned automatically through story progress, shortly after the tutorial.

Earned after completing the game’s campaign.