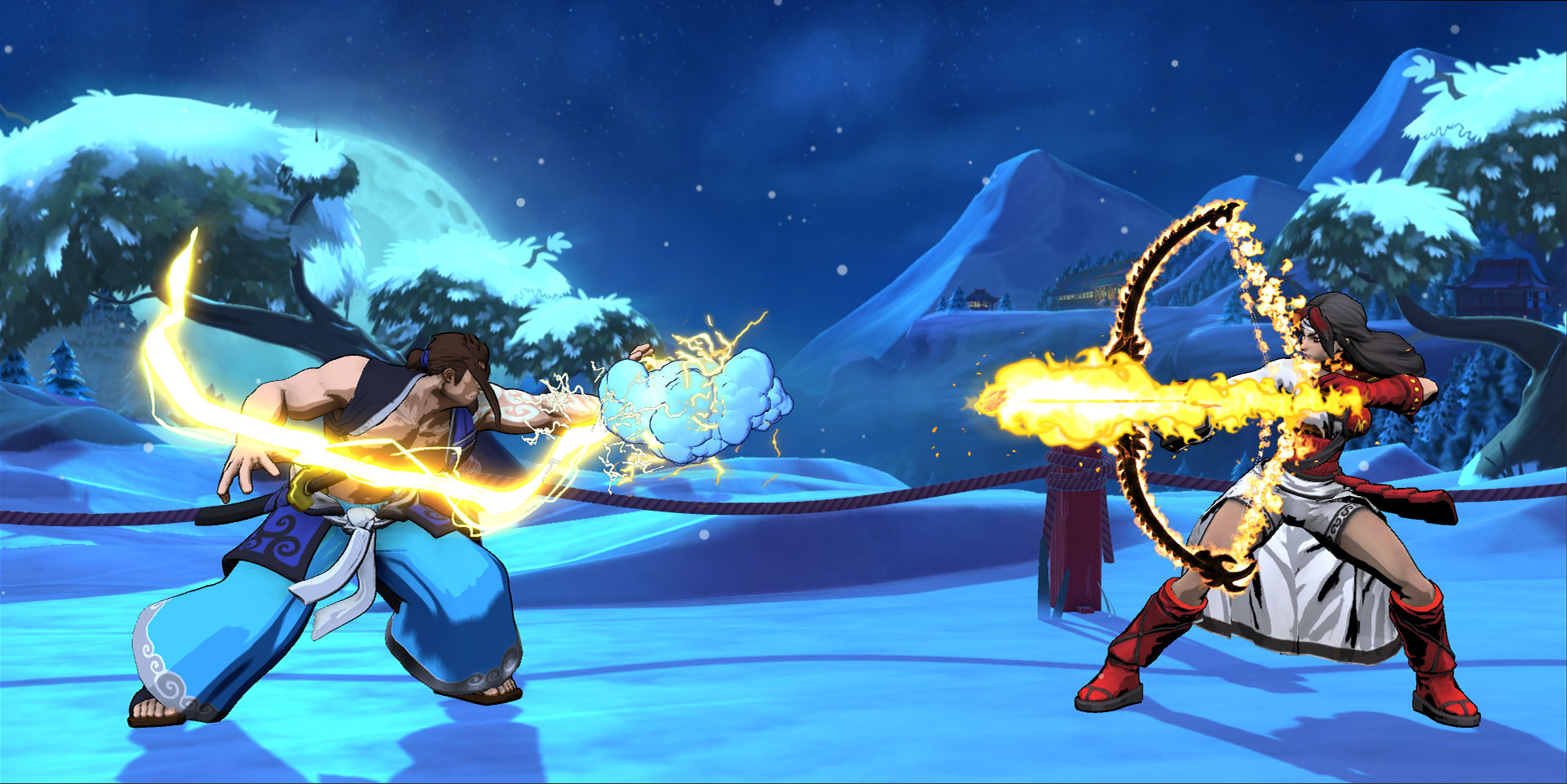 Punch, kick, it really is all in the mind

When you talk about fighting game theory, it’s impossible not to mention David Sirlin. Whether you know him as the guy who wrote Playing to Win, the defacto guidebook to improving as a fighting game player, or as the guy Capcom called in to re-balance Street Fighter 2 Turbo for the HD re-release in 2008, or as the creator of Yomi, a strategy card game based on fighting games, his impact on the genre can’t be denied.

Now, Sirlin wants to make his presence felt again. This time not through essays, or by retouching a masterpiece, but with his own original game, Fantasy Strike. Given Sirlin’s enormous street cred in the fighting game community, you might expect any game he’d design would be for the hardest of hardcore crowds.

You’d be wrong. Fantasy Strike is designed to bring the high-level thrills and mind-games of the best of competitive fighting games to the common gamer. 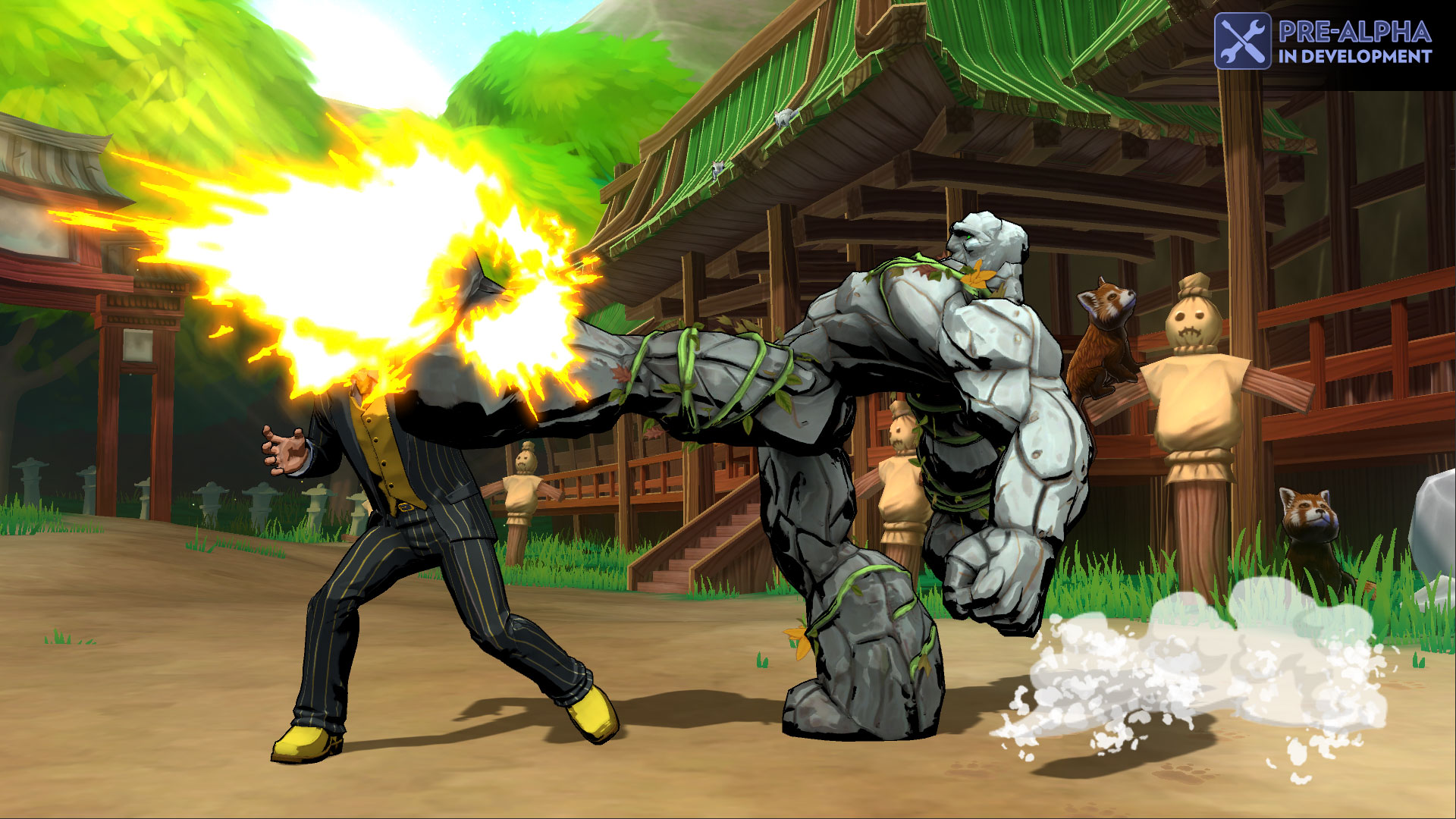 Fighting games are frequently bemoaned for their inaccessibility. It’s a fair criticism. Name any modern fighting game and no matter how “novice-friendly” it might try to be, it will still require hours of practice, research, and frustration just to become fluent in its basic mechanics and rules, let alone reach any level of competitiveness. Just take a look at something like King of Fighters, a series where there are lengthy tutorials dedicated just to learning the different ways you can jump.

Fantasy Strike aims to take the drudgery and grind out of the fighting game experience. Rather than hiding the meat of the game behind complicated inputs and obscured mechanics, everything in Fantasy Strike is laid out on the surface. Each character has a suite of three normal moves on the ground, two special moves, and three moves that can be done in the air — all done with the push of a button. A simple color-coding technique clearly indicates what kind of moves do what, with invincible reversals, super-armored throws, and deadly parries all visibly telegraphed so there is no doubt about what any particular move does.

Genre standards like jumping, blocking, and throws are present, but several other sacred cows have been tossed into the thresher. Fantasy Strike doesn’t including ducking (meaning way less emphasis on the high/low mix-up game), dashes, EX moves, or any kind of combo-breaker/get-out-jail mechanic. Even things like the way damage is handled is kind of maverick, with health represented as large distinct chunks making up a health bar with each attack gouging out a pip or two at a time.

Rather than focusing on dexterity, Fantasy Strike focuses on decisions. By trimming down all the genre excess of complication and boiling special moves down to one-button inputs, players are able to focus more on the intent behind their actions rather than getting lost in the frenzy of execution. 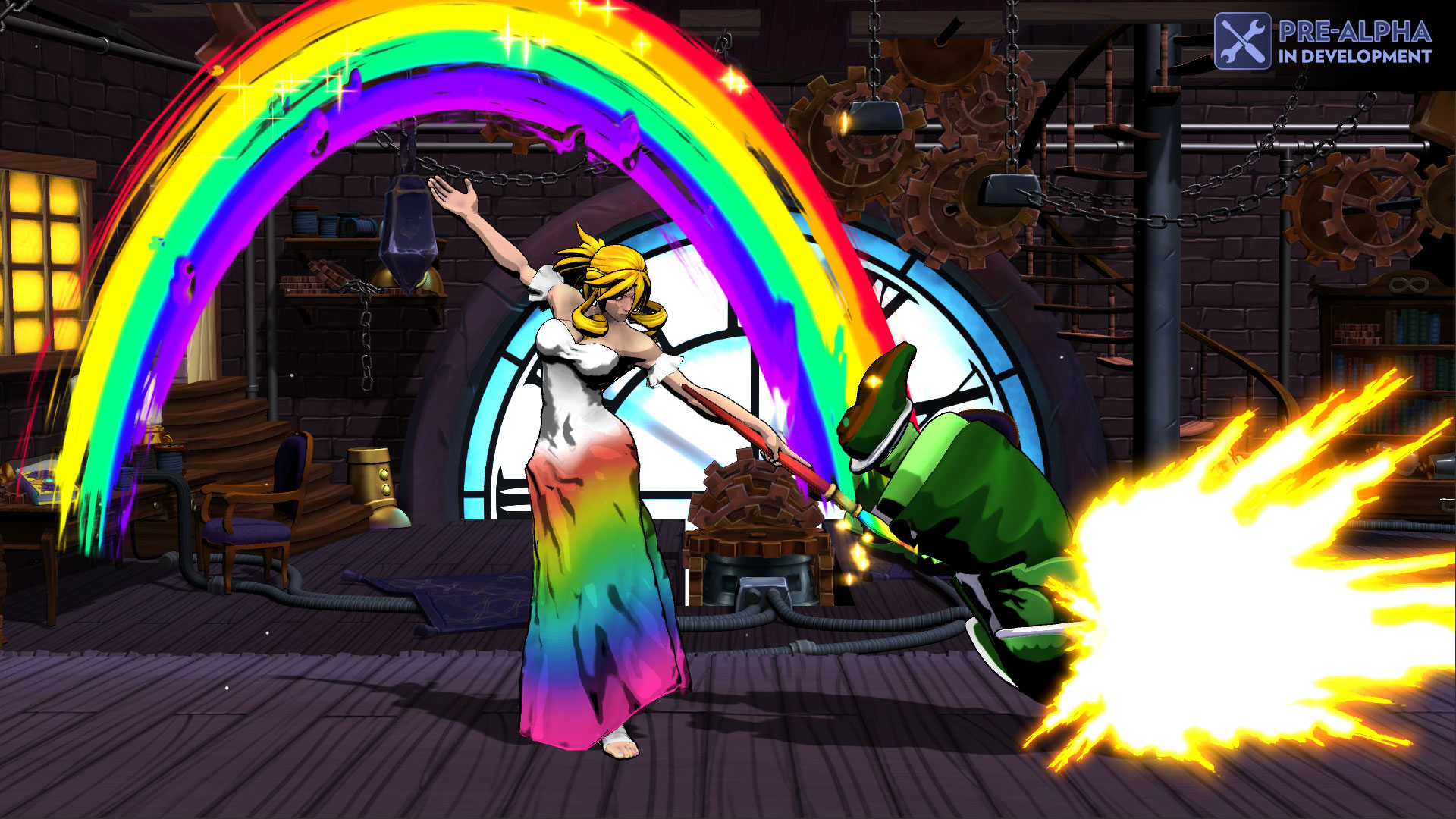 Pressing a button in Fantasy Strike is a simple, but purposeful act. It commits you to a move that may place you in an advantageous position, or a disadvantaged one. It may perfectly counter what your opponent is doing, or it may leave you wide open to a devastating punish. Whatever the case, pressing a button always indicates that you have made a choice and are committing to the consequences of it.

Nothing symbolizes this philosophy more than the “Yomi-counter” a reversal throw that is triggered by doing absolutely nothing when your opponent tries to throw you. After decades of instinctively mashing for a tech-throw or trying to jab out of what seems like an incoming throw, the simple, serene calm of a Yomi-counter takes some getting used to. It’s a hell of a thing to actively choose to leave yourself completely vulnerable, but when you know that your opponent is definitely going to throw, all you need to do is sit back and let them hang themselves. That’s what “yomi” is all about after all, reading your opponent like a book and making calculated choices.

Playing with a pre-alpha build of the game over the weekend I could see the potential in what Sirlin Games is brewing up. The time between familiarizing myself with a character and fighting with serious intent might have been the shortest I’ve ever experienced in any fighting game. Instead of puzzling through an arsenal of different normals, specials, and context-sensitive commands, I just got in, tested the basic moves of each character and started throwing down. I was making reads and learning match-ups within minutes of play, not days. 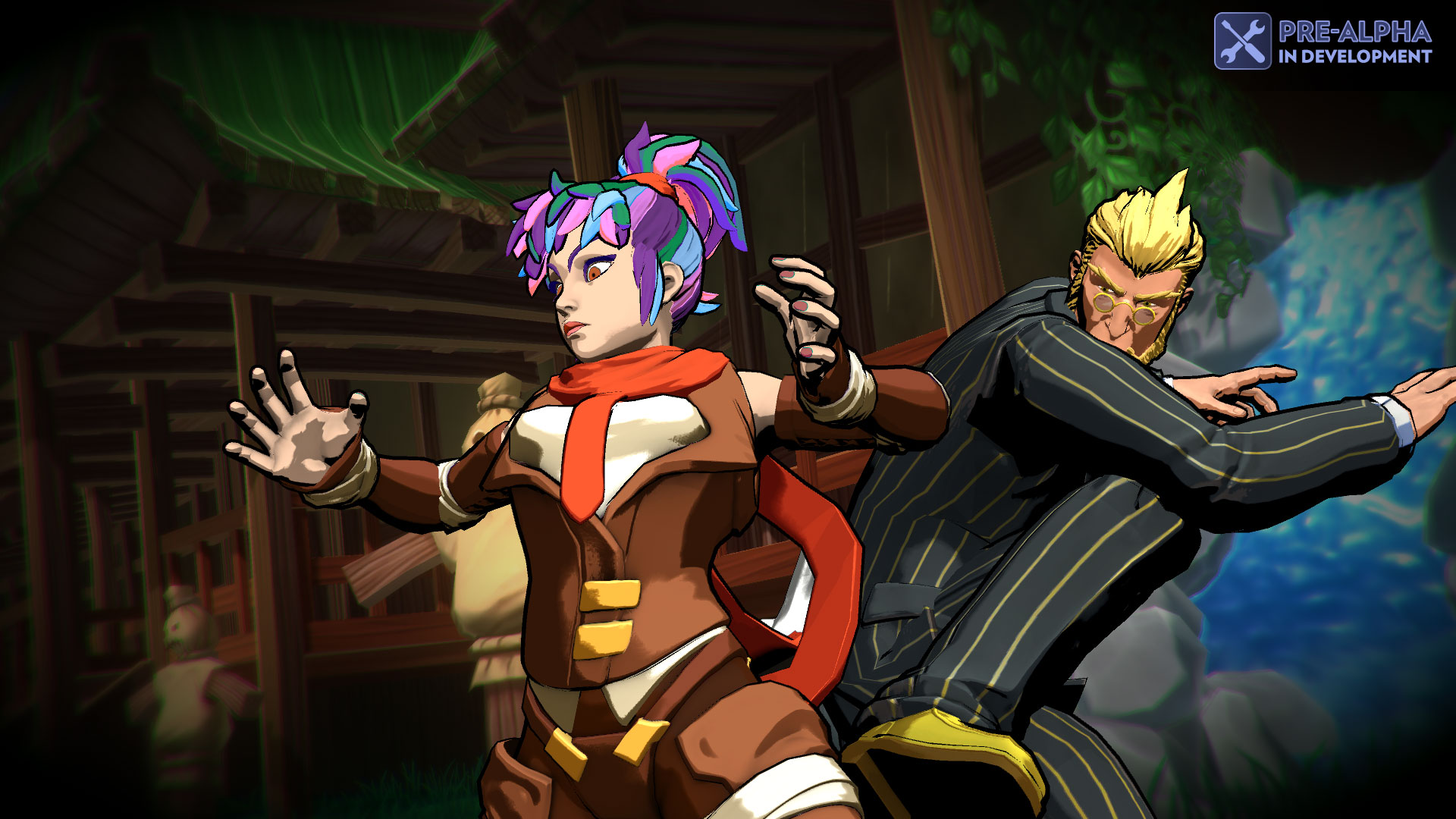 As a fighting game fan, I got into Fantasy Strike quickly and I suspect other fighting enthusiasts will love it. The big question though is how the average person, who has never touched a fighter, will find it. Fantasy Strike goes miles beyond what other fighters do to make the action on screen clear and legible to the untrained eye, but there is still a lot of genre mainstays like cross-ups and tick-throws that are sure to bamboozle new players. It’s by-far the most accessible fighting game I’ve ever played, but it’s still a fighting game, full of nasty tricks and confounding situations. If you’re not already down for that kind of an experience, I’m not sure easy controls and simplified rules will really convince any new converts.

Compounding that, the art style and character direction seem a little dull, so far. While the game is very early in development and things like the backgrounds, facial expressions, and special move effects are certain to improve with time, I’m more concerned with the overall style of the game. Fantasy Strike borrows from the roster of David Sirlin’s Yomi card game, which features fairly generic archetypes. There is your typical stoic samurai, a jumpy ninja-girl, a rock monster, and two flavors of evil aristocrat, but nothing that really jumps off the character select screen (the magic painter lady being the exception). There are plenty of send-ups and nods to other famous fighting game characters in their move-sets and animations (the dude I played with the most is basically Slayer from Guilty Gear), but those references are only fun if you’re familiar with the source material. For a game that is targeting a whole new audience, you’d hope for a more compelling cast and less of a focus on in-jokes. 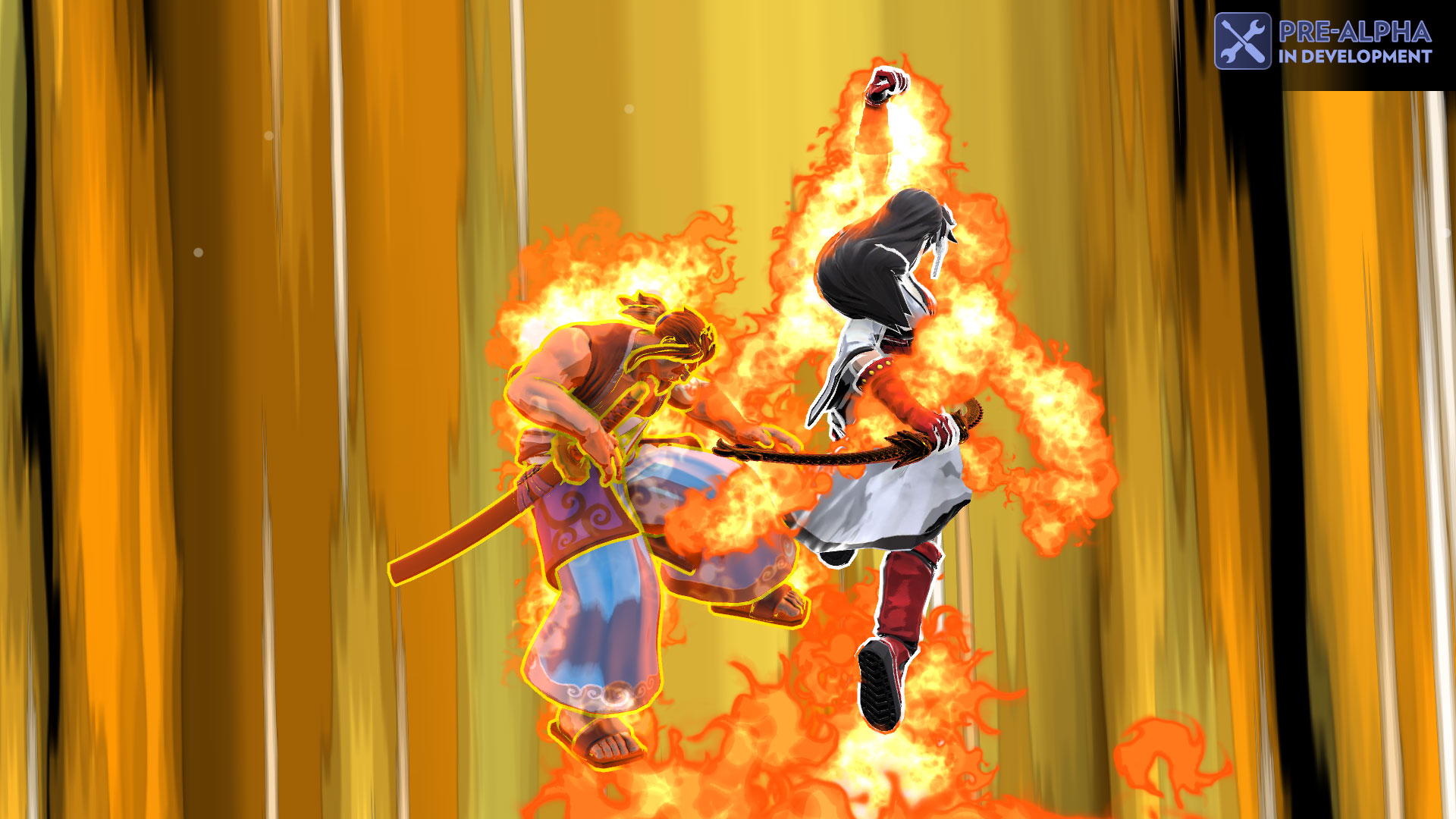 Of course, that’s just for right now. Sirlin Games intends to expand the cast and polish the game with the help of a Fig crowdfunding campaign. Starting today, interested gamers can contribute to the ongoing development of the game and possibly see a return on their investment when the game is released. Sirlin Games has included a two million dollar reservation for Fig securities for anyone eager to invest in the accessible fighting game, and contributors who pledge for $49 or more will receive a playable version of the game when the campaign ends in August, giving them an early start on the planned Steam Early Access release.

Fantasy Strike has a strong foundation of excellent gameplay, an outstanding pedigree, and an intriguing pitch. I’ll be interested to see if that’s enough to make an impact in the over-saturated crowdfunding world.