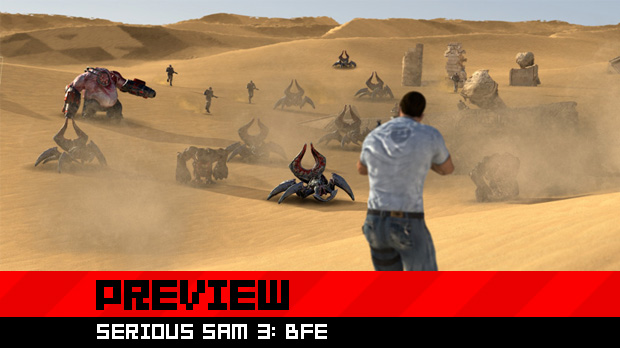 A Serious Sam 3 preview seems largely pointless. Yet, here I am. What a rebel!

As Jim Sterling said in his E3 preview, Croteam’s latest has all the silly enemies and weapons you want. It’s shaping up to be every bit as good as past entries. That’s all you can hope to hear. Except, I’m going to go one further and say it’s shaping up to be best one yet. Where previous Serious Sams felt like a placeholder for a new Doom (one that plays like the original Doom, that is), Serious Sam 3:BFE feels like the logical progression of the ’90s-style, arena-based FPS.

I will care substantially less about a new Doom after this comes out. Read on to find out why.

Serious Sam games always seem to overstay their welcome. They are fun at first but become repetitive and tiresome. Yet, I find myself revisiting Doom and Quake every year, despite id Software’s classics being based on the same format: In/Arena/Out. What makes those games so timeless is the level design, an element that always felt disregarded in the Serious Sam series. Serious Sam 3 feels like it’s taking great strides to change that — to the point where I may no longer think of it as Painkiller’s inferior companion.

After getting a good hour sample of the game, including a look at some new levels and its balls-crazy final stage, I am taken aback at how this series has found a way to excite me again. The game is still full of sprawling outdoor arenas, but they are are filled with alleyways, walls and indoor areas. This makes crowd control feel interesting and challenging, in a way that id Software games did back in the day.

My favorite mission had to be one partway through the game that felt like you were playing in a bombed out Middle Eastern village. The game does feel a bit too much like Modern Warfare, but since this level recalled obsessively playing the favela level in Special Ops, I won’t hold it against Croteam. In past Serious Sam games, you’d just stand in an open area and fire away.

In Serious Sam 3, you’ll evade enemies by running down alleyways, taunt them into a closed room and rip their heads off if you are feeling brave. The game is still built upon the repitition of killing hordes of enemies, but there are so many variables that the levels and rebuilt combat system offer this time. As long as you are still up to shooting things in the face, the game will give you enough tools to keep it fun.

The melee weapons in this outing are made to be used as secondary weapons, not last resorts. Your fists won’t do you much good, but swinging your giant hammer in a 360-arc will. The game’s weapon load-out might be a bit daunting at first, but you’ll soon find yourself comfortably switching weapons to match your enemy. Fans will be happy to hear that the classic laser gun is in the final game and it’s as great as it ever was.

There are some things that concern me about Serious Sam 3, however. Although the game only has 10 minutes of cutscenes, it does have some levels that slow down the pace a bit more than I liked. One found Sam walking through a dimly lit museum filled with alien eggs, when he should have been busting ass through a crowd of demons.  I’ll give the game the benefit of the doubt that these slower scenes will make for an interesting change of pace when played within context. However, everything else about Serious Sam 3 looks like a great addition or welcome return of a past feature in the series.

You’ll still have your insane 16-player co-op (along with a very rare 4-player split-screen option), point system, and memorable weapons (THE CANON!) On the other hand, you also get new features like destructible environments, sand storms that limit your vision and a terrifying, Tremors-looking Sand Whale that keeps you within the level’s parameters (kind of like the shark in Jak and Daxter). I’m especially fond of the new enemy Scrap Jack that looks a direct throwback to Doom II’s Mancubus with its sagging gut and guns for hands.

Based on what I previously saw and heard, I expected Serious Sam 3 to be a half-hearted sequel that tried its best to fit in with all the military shooters that currently populate the market. While I am disappointed the game’s levels don’t have the visual variety of Serious Sam 2, I am pleased to see that the game makes the most of its Egyptian setting. The changes to combat, level design, and other aspects are enough to keep me invested, however. It seems those four years Croteam spent developing this sequel were put to good use. I can’t wait to shoot crazy numbers of demons with 15 friends when the game drops October 18.