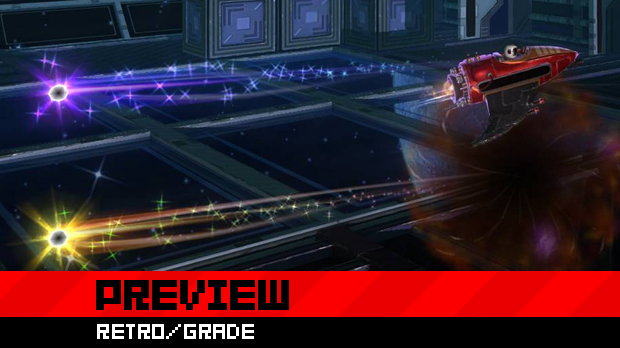 At first glance, Retro/Grade looks like the world’s worst shoot-em-up. The bullet patterns are completely random, the ship is restricted to five vertical planes and it’s pretty repetitive. Good thing I examined the game further and played through the demo at Fantastic Arcade. Otherwise, I wouldn’t have realized I had mistaken a rather ingenious rhythm game for being a poor shmup.

If you have followed my articles here on Dtoid the last couple months, you might have gathered that I love shmups and rhythm games more than most things in life (including corgis [sorry, Dale!]). So imagine the happy load I dropped in my pants when I discovered I was playing a rhythm game in the guise of a classic 90s , Gradius-style shmup. Actually, don’t imagine that. That’s kind of gross. I don’t do that sort of thing, honest. I remove my pants first and … nevermind.

24 Caret Games’ debut has been in the works for a while. After gaining steam at the Independent Games Festival in 2009 and being featured at IndieCade in 2010, the developer gathered the resources to spruce up Retro/Grade and ready it for release on PlayStation Network later this year.  Good thing too because you and I may have missed it otherwise.

The game opens with protagonist Rick Rocket defeating the final boss, cueing the end credits. If the long list  of names doesn’t make it obvious enough – this is a game made by three guys – it’s an elaborate gag that introduces the player to the main premise of the game. After saving the day, a space anomaly reverses the flow of time. In order to survive your return back to square one, you must dodge bullets backwards and position yourself to shoot the bullets you previously fired.

This doesn’t really tie all that much into the rhythm action, since the game would play the same if it were progressing forward. It’s a neat touch though. The mission descriptions also add character to the game, but it’s the fantastic soundtrack by Austin electronic artist Skyler McGlothlin (a.k.a. Nautilis), laser beam eye-candy and addictive action that makes the game standout.

While the demo only let me play level 10 through eight (remember, you are beating the game in reverse),  I got a pretty good feel for movement and rhythm in Retro/Grade. The first stage throws only simple bullet patterns at you that are easy to read. Since the game is modeled after a shmup, it’s very easy to manueaver your ship based on visuals alone. Once you lock into the groove of a song, you’ll find that the music will help you a lot more with timing those button presses.

Since you are traveling backwards in time, the goal is to dodge enemy fire while shooting your bullets in the exact place you originally were. This might sound like a confusing concept, but it works because the game is so simple in execution that you don’t need to know any of this. It’s basically Rock Band with a spaceship (you can even use a guitar controller): You move your ship into the lane of incoming notes and hit a single button in-time to the notes/fire positions.

If you screw up, you can rewind time. Another nice touch is that even if you fail to act upon it and find yourself staring at the “game over” menu, you’ll still be able to rewind back to earlier and change your fate. However, warping time is a limited resource like your health. Once you start dodging enemy bullets from the left, while hovering over your previous bullet positions to the right, you’ll find yourself in some tough situations where you’ll need that double-take.

Retro/Grade feels like the missing link between Amplitude and Guitar Hero. It gives the player the accessible rhythm gameplay of the latter, while remaining abstract enough in concept to throw in new elements as the game progresses. For example, you’ll face off against different weapon types that will require you to spam the fire button or hold it down and trace a line that extends vertically and horizontally. I can’t wait to see what surprises will be in the final release.