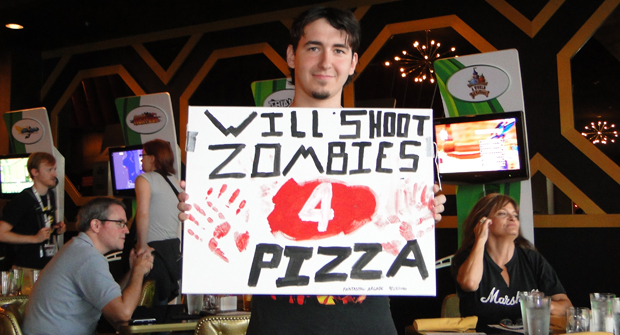 For a first year event, I was truly impressed with the scope and variety of gaming goodness on tap for the Fantastic Arcade that took place in Austin, TX last weekend. Connected to the well established and widely attended Fantastic Fest movie event, the Arcade falls in line thematically with the Fest’s focus on quality independent content. With no AAA presence eating up real estate, attendees were free to explore and get their hands on both upcoming and already released indie titles for XBLA and PC.

This thing should have been packed to the gills from start to finish. From machinima to chiptunes, tournaments and documentaries, panels and parties, and a strong showing from indie developers both local and abroad, the Fantastic Arcade really had something for everyone.

Unfortunately, the place was a few steps shy of a ghost town. After the vibrant bustle and overwhelming energy of PAX, even the convenience of having short or no lines for most games couldn’t make up for the lack of excitement. With a dearth of players present to talk to and hype up, developers slowly abandoned the floor over the course of the show, leaving their games like orphans on doorsteps to go and have some fun.

This was a true shame — such a well organized event with so many quality components deserved better. Despite all this, I think it’s worth sharing some of the high points of the event in the hopes that more people will take a chance on it next year. 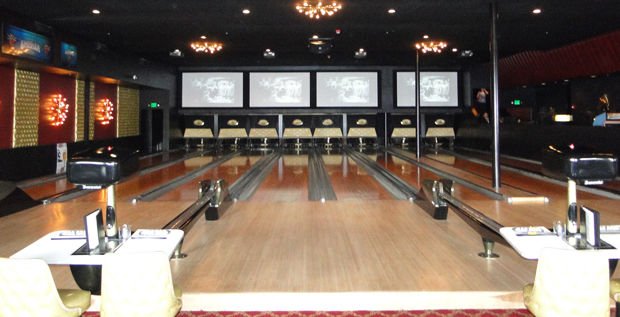 The bulk of the event took place in the swanky Highball bowling alley, which looks like one of Jeffrey Lebowski’s fever dreams. Pimped out lanes connected to a sit-down restaurant all done up in a old-time speakeasy decor (complete with chandeliers) made a killer backdrop for all the gaming. Featured indie games were playable in cabinet form, and rows of PCs gave instant access to dozens more.

Out of the many indie offerings I sampled, two really stuck with me. The first of these was Monaco, which is more of a known quantity since its strong showing at PAX. Playing the game in a cabinet only reinforced the old-school simplicity and sense of fun for me. The combination of the heist/caper conceit with the class-based arcade action really did it for me.

The other was a truly odd but evocative title by the name of Ulitsa Dimitrova. Not a traditional experience at all, this short indie offering lives somewhere at the intersection of video game and Russian political cartoon. You play as a 7 yr. old boy on the streets. As far as I can tell, the main objective of the gameplay is to chain-smoke.

You wander down the street, begging for money from some passers by and stealing Mercedes-Benz hood ornaments off of cars, which you then exchange to shady individuals for cigarettes that you smoke. You run into your mother, who is a prostitute, drinking vodka on the street; she stops to give you a kiss until a brutish looking gentleman walks up, stuffs a bill into her halter-top, and leads her off-screen. 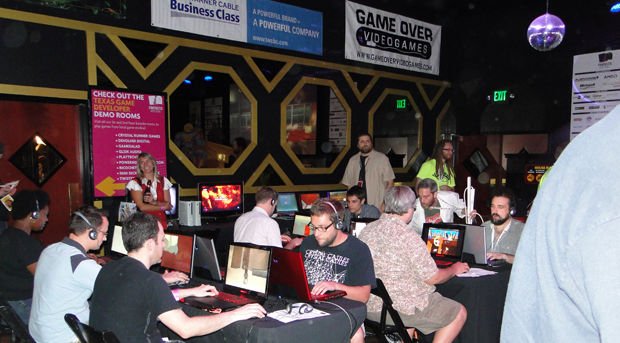 As you continue walking, you will begin to see these scenes repeat, and then the realization sets in that this is life for this child — hustling, begging, and an absence of family all repeated day to day. Once that set in, and I thought I got the point, I stopped progressing and took my hand off the mouse. If you stop moving the child forward for more than a few seconds, he will lay down on the sidewalk and snow will pile up on him as he sleeps. Seconds later, he dies of hypothermia.

Again, not the greatest game in the world – but the mechanics did a phenomenal job in reinforcing the message. For these children, the only choices are a degrading and desperate daily grind or an ignominious death. Interesting side note: the Russian Parliament is planning to ban this game to prevent it reaching the public there.

After I had my fill of delicious artsy-fartsy gaming, I got my hands on Comic Jumper, Super Meat Boy, Hydrophobia, and World of Keflings at the many open XBLA kiosks. For the movie tie-in, Rooster Teeth was present showing off the latest from Red vs. Blue and the show also featured a 48hr. machinima making contest. MC Frontalot performed one evening, and a documentary about the birth of nerdcore was shown.

The panels were held in theatres at one of the Alamo Drafthouse cinema locations in town, which is simply the best possible place you can go to see a movie, ever. As I sat and listened to a panel with Tom Hall (one of the co-founders of id Software) and others discussing the history of magic in gaming, a server brought me a delicious pizza and cold pint of Stella Artois then and there. Inititally overwhelmed by the nerdy awesomeness, I was abruptly brought back down to earth by the realization that I was one of only 12 attendees to the panel when the joint should have been full. 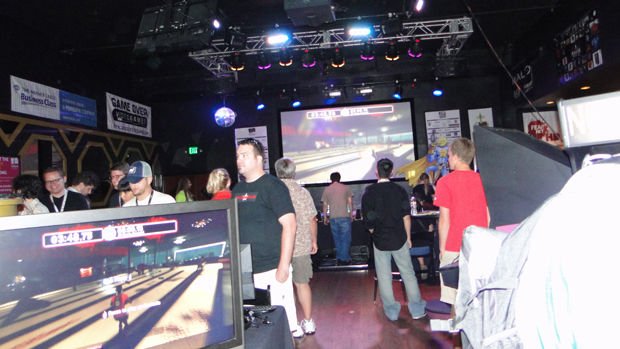 One of the coolest parts of the event for me was watching some of a Left 4 Dead 2 tournament on a gigantic screen at the Highball. A local modder created a full satellite-accurate reproduction of the Alamo Drafthouse, the Highball, and the surrounding buildings. Players could actually bowl and play the other games within the map itself; seeing Coach roll some Skeeball was worth the price of admission alone. Teams took turns playing this map in survival mode, with the longest run being awarded $500 in cash.

Seeing people fight off zombies in a virtual reproduction of the room you’re standing in is a pleasantly meta experience, and I found myself checking back in periodically to see what portions of the map were proving to be most effective for holding off the undead. So, if the apocalypse comes while I’m seeing a movie, I now have my strategy fully lined out — post up at the back row of one of the Alamo theatres so they have to climb stairs to get me and I can focus my fire down the aisle where they’re lined up.

My hopes are that such an ambitious event finds a way to promote itself better and up the attendance next year. Without bigger crowds, it’s going to be tough to get this year’s developers to return or to attract other indies who really need to be a part of what’s incubating at the Fantastic Arcade. With all the unique and great things going on there, I certainly wish them the best of luck.