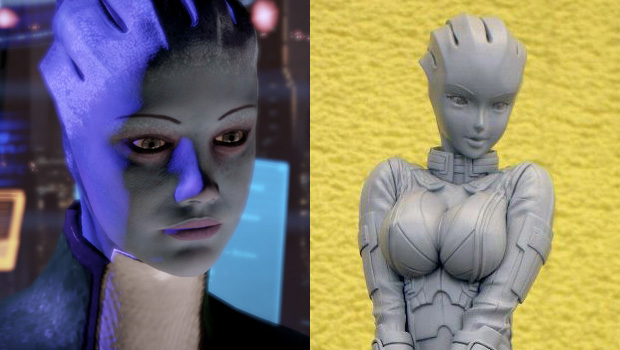 I remember when the Western anime craze really started to boom in the late 90s. Not only did media distributors start licensing every single Japanese property under the sun, distinctly Western properties began to demonstrate greater and greater Japanese influences. It started when shows like Dexter’s Laboratory would incorporate speed lines, giant robot battles, and kaiju monsters. Eventually, there was Teen Titans on television and Marvel Mangaverse in comics, which tried to more directly emulate Japanese art and animation.

This wasn’t a one-way street, however. Powerpuff Girls Z was a Japanese adaptation of a Western cartoon which itself drew heavily from Japanese media. Currently, we’ve got Marvel Anime, four miniseries by Japanese animation studio Madhouse, based on Iron Man, Wolverine, X-Men, and Blade. Just as we are fascinated by foreign styles, likewise are they with ours. It’s what explains the viability of the Kotobukiya Bishoujo line of figurines, which immortalize fictional female characters, including many Western comics icons like Wonder Woman and Phoenix.

Now, BioWare is working with Kotobukiya on a mold of Mass Effect‘s blue-skinned asari Liara T’Soni. Production images were shared on the company’s Facebook page, but the over-3000 comments are less than receptive. Hit the jump for my further musings on this situation.

I’m not saying that I personally like the style of the Bishoujo line — some pieces are fine while others seem too awkward and lifeless. In this particular case, there are certain criticisms that I can stand behind, such as her breasts’ being too big or her legs’ being too long. However, the commenters’ biggest concern is that she looks too “anime-ish.” That’s the whole point of the Bishoujo line! If that’s the big problem folks have with the statue, no amount of redesigning is going to satisfy them.

I’m guessing a large reason for the negative reception is that, for most people, anything Japanese-y is a big turn off, especially when the look is applied to a property that represents a contrasting set of ideals and expectations. It’s the reason why the JRPG has lost favor in the Western market. For them, the style is associated with various unappealing tropes and cliches, even if said tropes and cliches are a generalization brought about by limited familiarity with Japanese media. There really isn’t much anyone can do to change their minds.

Comic book fans (and I’m talking about the ones who actually buy comic books and associated merch, not the ones who are only familiar with the movies and cartoons) exist in such a niche that there’s likely a heavy overlap with manga and anime fans, hence why the Marvel and DC Bishoujo statues aren’t entirely scorned. It’s understandable why the population that enjoys what Mass Effect represents would be taken aback by the Liara figure. Still, it’s unfortunate that in this current media environment, in which the East and West draw so much inspiration from one another, often joining together to create conglomerations that are neither completely Eastern nor Western, there are still people who believe ideas from one side cannot be compatible with ideas from the other.

P.S. Don’t let those people catch wind of the Mass Effect anime! They would implode!