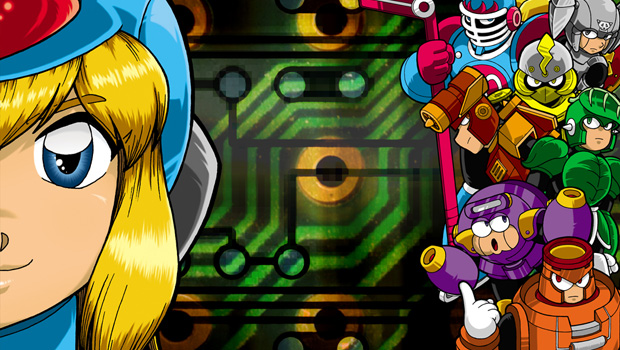 [Update: I mistakenly said that Dj CUTMAN was the organizer for this project. It was actually the staff of the VG music site Nobuwo. My bad.]

Rokko Chan was really something special, wasn’t it? If you haven’t played it or even heard of it, you should correct your mistake right now. It’s a cute little Flash game that copies the Mega Man formula wholesale, only it changes names and locations “to protect the innocent.” It could pass off as a direct sequel to the NES classics, but a few unexpected surprises are sprinkled throughout just to keep you on your toes.

One of the many highlights was the game’s chiptune soundtrack, which can be downloaded for free. It’s so spectacular that videogame audio site Nobuwo decided to organize a remix album and release it through the GameChops net label. Rokko Chan: Extended Play is an eight-track tribute — the first track is actually pulled directly from the OST — that rearranges the music in the same chiptune style.

Dj CUTMAN and Spamtron, who worked together on the Zelda II-themed Bagu and the Riverman, contribute one track, while other artists round up the lineup. One track is even produced by FantomenK, whose song “The Massacre” serves as the closing theme for Hey Ash, Whatcha Playin’? Long story short, go and download the free album from Bandcamp as soon as you can!