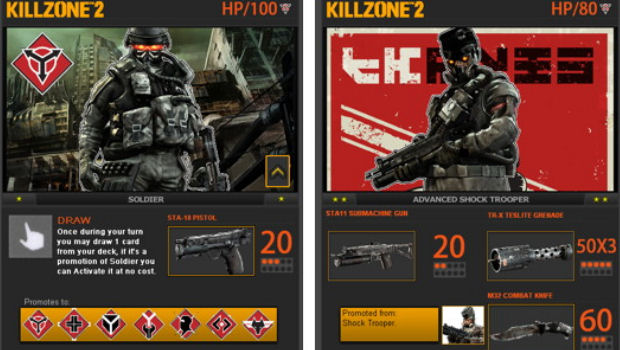 A very bored (but heroic) Killzone fan calling himself “thepineapple1” has decided that playing Guerrilla’s games on his PS3 just wasn’t enough glow-eyed fun. He has shouldered the burden of turning the series into a CCG — or collectible card game to you old granddads who aren’t down with the kids.

It’s a game for two players, who each spend “Action Points” to command soldiers, upgrade weapons and utilize vehicles. This isn’t just some cobbled together game, either. Mr. Pineapple knows his stuff, and has included a nine-page rulebook with the starter kits.

You can download your ISA or Helghast starter packs by clicking the provided links. The links in that last sentence. The ones that are their names. It’s not rocket science.

As someone who always loved collecting CCG cards (I rocked the little-known Aliens vs. Predator ones so hard) and who has a massive hard-on for Killzone, this is like a wet dream come true. Somebody at Sony needs to officiate this and release real booster packs. I would buy them. All of the time.