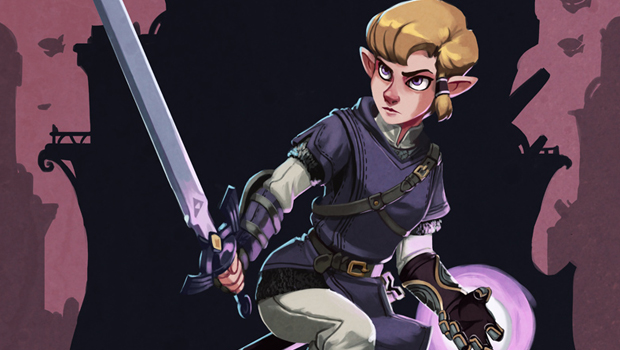 The first part of Anita Sakeesian’s Tropes vs. Women in Video Games series recently hit the web, focusing on the “damsel in distress” theme common to many popular game titles. In the video, Sakessian points some of her criticism at the Zelda franchise, proposing that it would be nice to see a game actually starring the princess (not counting that one CD-I adventure).

This idea was the basis behind the above concept art, put together by Dresden Codak author Aaron Diaz. His impressively detailed pitch for Zelda: Clockwork Empire recasts Zelda as the sword-wielding hero, while “Prince Link” is relegated to living a sheltered life behind the castle walls.

Diaz comments that he’s a big Zelda fan, and wanted his concept to tie into the established series continuity, setting it 2000 years after the events of Twilight Princess. He writes: “This concept work is meant to show that Zelda as a game protagonist can be both compelling and true to the franchise, while bringing new and dynamic game elements that go farther than being a simple gender swap.”

Though this unofficial fan-work likely won’t ever be a real game, it’s still an interesting look at what a female-led Zelda game might look like. Very cool!