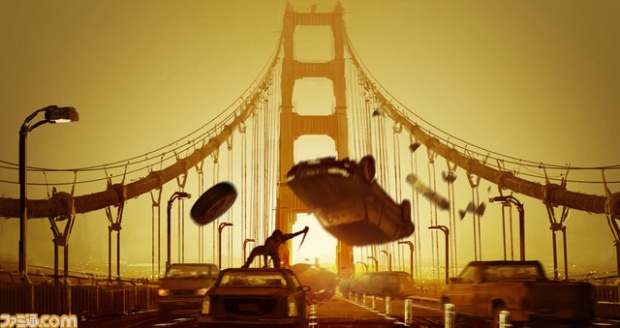 I was instructed to sit on our hot preview of WET until Monday. Embargos and all of that crap, you know. But it seems like Famitsu blew its load a bit early on this upcoming game, which they also say Bethesda is publishing.

They actually don’t say much, and only show a few pictures, but it’s still worth taking a look at. Famitsu does let on that the game’s scenario is penned by one of the same hands that does scenario writing for television’s 24. They also give a brief profile on Rubi, the game’s heroine. She’s a dual gun and sword user out on a search for a missing son, traveling the world and kicking ass to bring him home.

Also touched on is a bit of the control (don’t kill me, powers that be!), which explains that Rubi wields two pistols that can be aimed at two different enemies independently. You can lock on to one target and aim at the other. Also, a Hollywood movie stunt team is said to be overseeing the movement in this game.

That’s not much to go on, is it? At least there’s some nice screenshots. We’ll have a whole bunch more Monday morning, when our full preview of WET hits. Stay tuned.