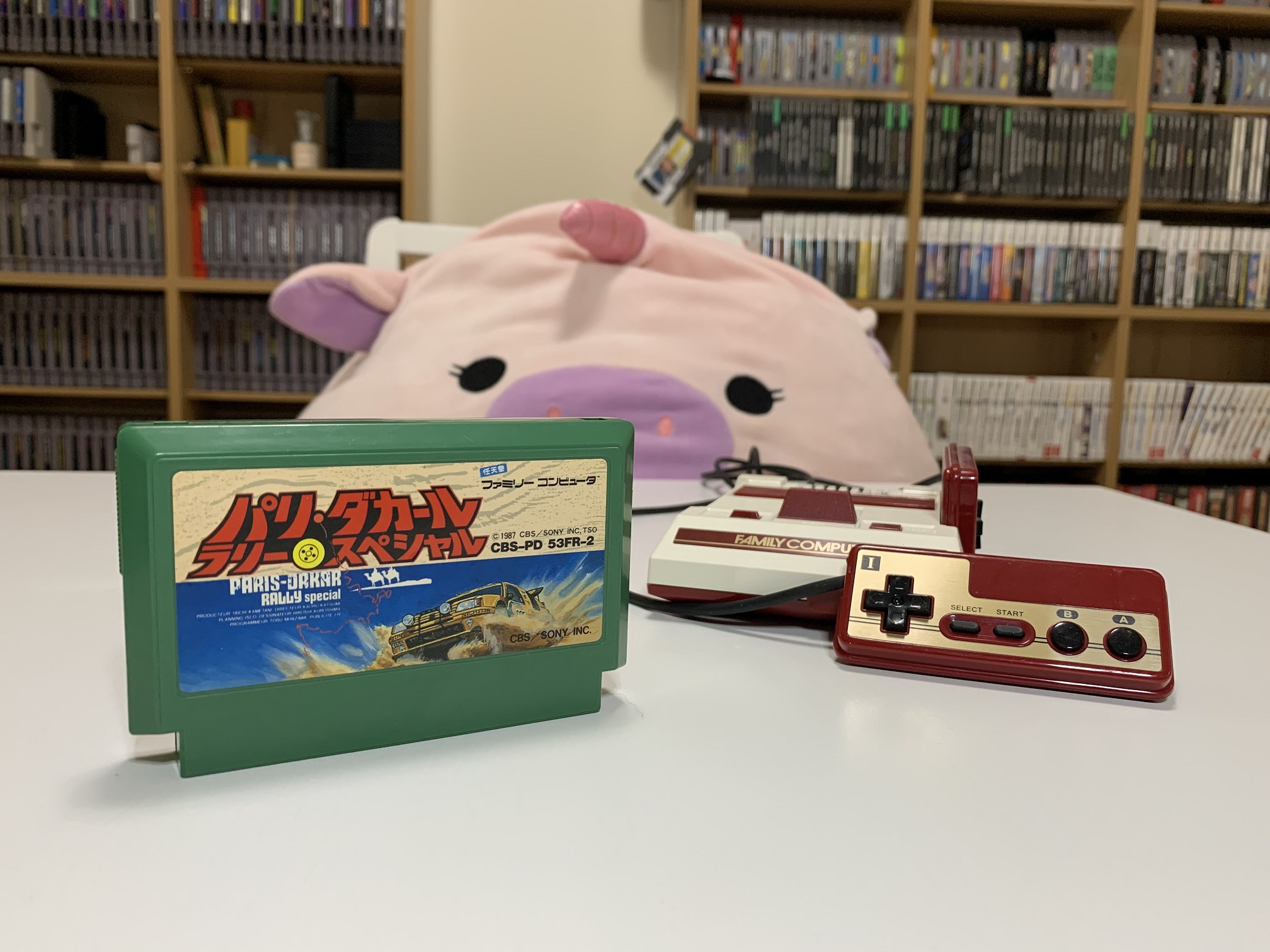 If there’s one Japanese trend that it’s maybe better off we missed out on in the Famicom era, it’s their non-games. Or anti-games, maybe? They were deliberate kusoge that played with the expectations players had learned in much more popular games. They were designed to confound. If the gameplay wasn’t obtuse, it was obnoxiously inconvenient, or insurmountably difficult.

That’s how you teach children what it’s like to be an adult.

I’m not sure if these were supposed to be funny, but the joke wears thin pretty quickly. Off the top of my head, I can name three of these games: the legendary Takeshi no Chousenjou, the bizarre Utsurun Desu, and 1988’s Paris-Dakar Rally Special. I think the latter is the most malicious because by looking at the name or cover art, you can’t really tell it’s anything but a racing game.

The Paris-Dakar Rally was an endurance race that, appropriately, started in Paris, France, and ended in Dakar, Senegal. Due to security concerns, it ended in 2008 and just became the Dakar Rally, moving to other regions. I guess some people don’t appreciate it when a bunch of rich people drive high-performance cars through impoverished areas of Western Africa.

Inequality aside, that’s not a bad idea to base a game on, but I don’t think the developers at ISCO, Inc really wanted to. I’m not sure they wanted to make a game at all. In fact, I feel like the notoriety behind Transformers: Convoy no Nazo might have motivated them to top it as an unfairly difficult kusoge.

Forget what you know about rally driving, which will be easy if you’re like me because I know very little. Paris-Dakar Rally Special starts you off trying to acquire a car, a sponsor, and a co-driver. This means walking the streets, entering every building, and inquiring each of them about the above things. Despite being the most needlessly complicated part of the game, it’s also the easiest because you can’t die or run out of time.

Then it’s time to actually race, and this is where Paris-Dakar Rally Special really starts showing its contempt for you. It’s easy enough, at first, as you avoid cars and barrels, but then other cars start coming up from behind and you have little room and time to get out of their way. A single hit drops a life off your gauge, and you can only get hit three times before you have to start the whole level over.

This was the part I was stuck on for the longest. Mainly because it goes on forever. Partially because I wasn’t acclimated to Paris-Dakar Rally Special’s maliciousness.

The next level is, like, sort of a maze. You’re still trying to reach the top of the screen, but you need to pilot your rally car through city streets while other cars meander about. It’s straightforward once you learn that going onto the left-most street summons a death car gunning for your tailpipe. However, once again, this segment just keeps going and going. You have to be precise and not make any mistakes to get to the end.

After that is a side-scroller where your car can shoot for some reason. There’s some light puzzle-solving as you need to get out of your car to hit a button and extend a bridge or open a gate. I found this to be one of the easier levels in Paris-Dakar Rally Special.

It looks like you’re in for more of the same in the following stage since it too is a sidescroller. However, after carefully getting across a couple of water hazards, suddenly you just descend underwater to live under the sea. I guess you have to get across the Mediterranean somehow. This is a water stage, much like the ones that haunted children of the ‘80s. However, I didn’t find this to be overly taxing.

Then, you’re offroading. This is like a less annoying version of Stage 1. The hardest part is getting across the bodies of water by using rafts. The controls are just kind of terrible and missing the raft means death. This version is probably the easiest of the top-down stages, but that’s not saying much.

After that, you’re attacked by either the military or aliens or both. The vehicles look kind of otherworldly to me, but that might just be bad pixel art. Anyway, they want you dead. They did not authorize a race in this vicinity. Thankfully, this leg of the race is one of the shorter ones, and I still think you can die faster on the streets of Paris on level 1.

Finally, the 7th stage of Paris-Dakar Rally Special has you drive along precarious cliffs. My advice: take it slow. It’s a long segment, but there’s plenty of time.

Maybe don’t take my advice in going slow, because Paris-Dakar Rally Special ranks you at the end based on your time. Seriously, there’s a bad ending if you didn’t. It isn’t too difficult to beat all the other drivers, but, I mean, it’s a real bummer if you don’t. Paris-Dakar Rally Special is a pretty brutal game. Not the hardest I’ve encountered on the system, but just really stupid hard for what it is.

It’s mostly notable because it’s easy to think this is a game strictly based on the Paris-Dakar Rally, when it is blatantly not that. Not unless I missed something and the drivers actually swim their cars through the Mediterranean Sea. It’s just really weird. It feels like something that shouldn’t exist and probably wouldn’t in today’s market. There are many anti-games that still get released today, but I don’t think any went to the effort of acquiring a license just to pull a bait-and-switch.

If you’re wondering if English monolinguists can play it; sort of. The first section is text-heavy, but you can get pretty far just by going into every building and selecting every option. That’s because you essentially need to do that even if you know the language. It’s hard to know which building will give you money and which will provide you with a co-driver. It might help if you patch in the fan translation. Feeling your way through the first area might be the least of your challenges, however.