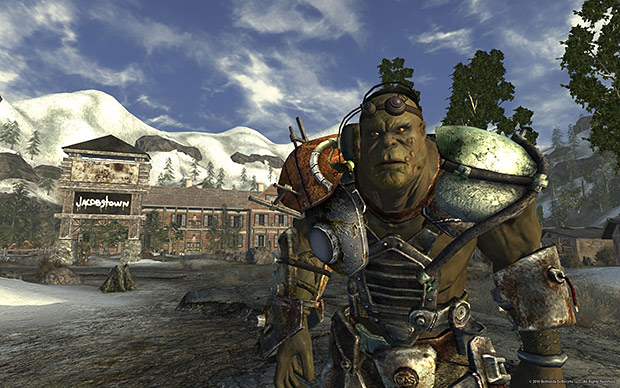 The main story quest of Fallout 3 (spoiler alert!) ended the game, but the “Broken Steel” add-on changed the ending to let you go back into the Capital Wasteland. That seems unlikely to happen with Fallout: New Vegas because of the way the game ends (and what the ending tells you). At a New Vegas demo last month, senior producer Jason Bergman told me that the ending to New Vegas “explains things well beyond the end of [the] game,” including “what happens to every one of our factions and major characters.”

That means that once the endgame begins, you can’t go back into the game world. Don’t worry — just before the ending, the game warns you that you’ve reached the point of no return, and automatically saves right there. After the end credits, the game gives you two options: you can load that save game, or go to the main menu. When I asked Bergman why Obsidian chose to do it that way, here’s what he said:

We tell the full story of every one of your companions through the end of their lives, and it’s weird to do all that and then jump back and say, “Okay! Now you can keep going again.” So we end the game, and if you want to do other quests, then you go back to that save game before the end sequence.

The way Bergman explained the structure of the ending to me made it sound like Bethesda won’t do something as clumsy as the retcon of “Broken Steel” again, in order to justify the add-ons for New Vegas. We’ll have to wait and see.

Fallout: New Vegas, developed by Obsidian Entertainment and published by Bethesda Softworks, will launch for the PlayStation 3, Xbox 360, and PC on October 19, 2010, in North America, and on October 22, 2010, in Europe.