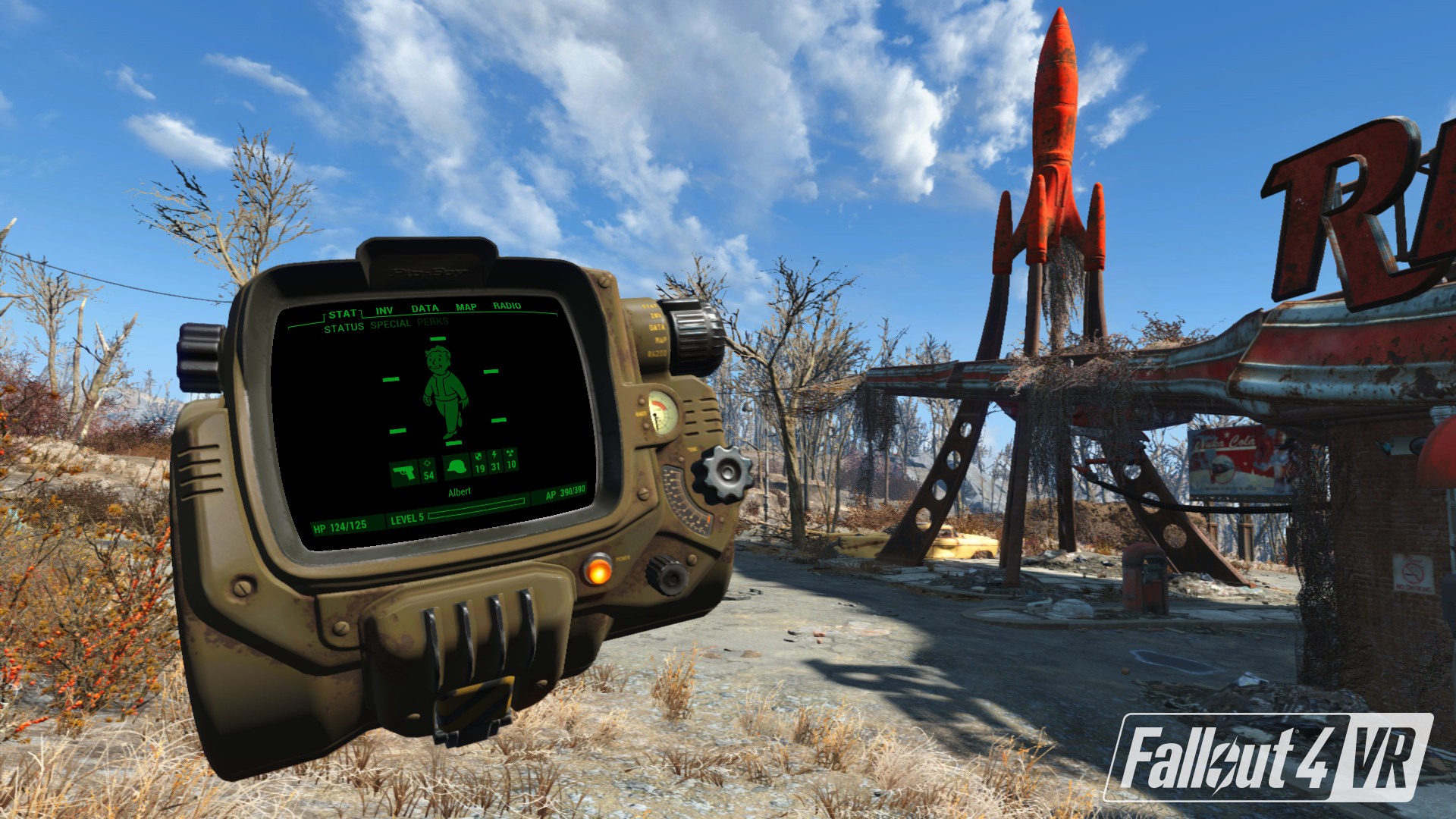 Every Fallout has its fallout

I wasn’t really sure what to expect from Fallout 4 VR. I can’t say that I’m the biggest fan of Fallout 4, but man, the idea of playing the entire game in VR sounded too good to be true.

Now that I’ve spent some time in the wasteland, it’s safe to say that Bethesda has delivered on what they promised — but I feel as if this is more of a weird middle ground for VR.

Fallout 4 VR is exactly that: Fallout 4, in its entirety, playable in VR. It was exciting to experience the opening scenes in virtual reality, even with a reduced resolution, made more noticeable by the fact that things are literally in your face. Players are given two options for locomotion: teleportation or traditional movement. Locomotion feels sluggish, and I could never quite get used to it. I didn’t suffer from any motion sickness, likely thanks to the darkened edges while moving (which are way less annoying than I thought they’d be). As lame as teleportation can be, it is my much-preferred method. Plus, teleportation allows for incredibly fast movement, which is great for anyone who has already played the game proper.

Teleportation also allows for insane amounts of cheating. I have been able to reach all sorts of unintended areas by messing around with the teleportation circle and the geometry of the world. Take the first real “mission” as an example, where Preston Garvey is introduced. Normally, you enter the museum, kill the raiders, find the key, and enter the room were Preston and his crew are holed up. Not for me in VR! I killed the first couple of raiders because they were there and then teleported into the open window that Preston looks out. Well, not exactly into it…I managed to teleport above the window pane by catching the teleportation circle on a random piece of world geometry, and then simply MASHED the teleportation button until I was above the room — the world was glitched out here, but I could stand. Then I simply teleported down into the room and broke the intended sequence.

To me, this was the most exciting element of the game — what could I do now that I couldn’t before? Gunplay is traditional VR gunplay. The VATS system that Fallout is known for is reduced to a slow-motion button that simply highlights the body part you aim at. As strange as that may sound, it is for the best. The exciting part about shooting something in VR is, well, actually shooting something. Plus, “bullet time” always makes me feel badass. Having an auto-target system like VATS would reduce the impact of the VR perspective and make me question why I would ever play it over the original game. Though, to be honest, that question does still persist.

Each time, as I’m making sure my base stations are plugged in and “gearing up” to enter the VR wasteland, I question if I would ever do this over playing the original game. As crazy as it is to be experiencing the entirety of Fallout 4 in virtual reality, I just don’t know that the incentive is there. Everything feels a bit clunkier, and if this were someone’s first experience with the game, they simply wouldn’t be getting the same experience as those who played the original. Also, the DLC is missing.

As I’m zipping and zopping around the wasteland via teleportation, I can’t help but be disappointed by the lack of actual interactions with things. Besides the control scheme, there is not much done here to make the game feel like a VR title. By now, I instinctively reach out to grab dresser handles, coffee cups, and just about everything that looks grabbable. Since this is really just Fallout 4 in a new perspective, interacting with objects means simply clicking a button. I get it, because there’s a lot going on here, but exploration just feels so empty because of this lack of touching; like I’m a ghost in this world — only visiting. It’s a disconnect that doesn’t exist normally, but everything changes when in VR. The little bits that are here, like being able to pick up and throw just about anything or checking the Pip-Boy by raising your wrist and actually looking at it, are outstanding.

Not that this experience overall is especially terrible — it’s not. In fact, it’s rather exciting to have firefights take place in more-or-less real time and be unable to pause the action (via VATS). I found myself using the environment way more; I was crouching behind cars and peeking out around corners like a more traditional FPS game. Again, not what I would call a “Fallout experience,” but for my second run through the game, I welcomed the change in pace.

It’s hard to recommend Fallout 4 VR for anyone who has already played the game. Even if you haven’t, it’s not difficult to find the original game for (much) cheaper. For a game that already exists, this is an impressive transition to virtual reality. But the lack of “traditional” VR interactions really make it feel lackluster in the end. I hope Bethesda continues their support for virtual reality as we move forward — a Fallout or Elder Scrolls game built from the ground up with VR in mind would be absolutely mindblowing.