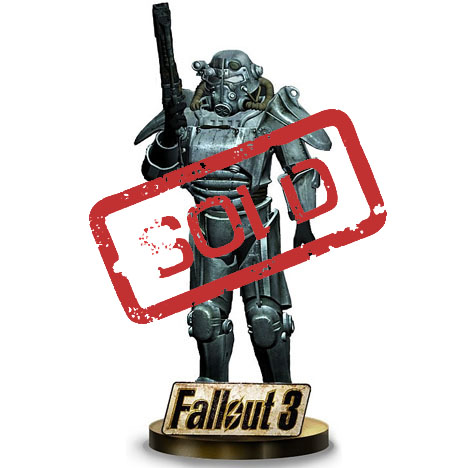 Remember that massive Fallout 3 statue we showed you at the end of last month? One fan just won it, and you’ll fall out of your chair when you see how much they paid for it.

Sam’s Club put this rare 7’10” tall Brotherhood of Steel statue on auction on October 28th with a starting bid of only $1. I personally kicked things off with a bid of $2. The price went to $20, then $100, $250 and on. In the final minutes, we witnessed a several bid increases, with one bump being just short of of almost $500! People really want this thing!

In our original post, we were concerned about the shipping cost of this 121-pound monster, but Sam’s Club later told us that the shipping would be free.  I bet R.S. is glad about that. Now all he has to do is worry about where to put it.