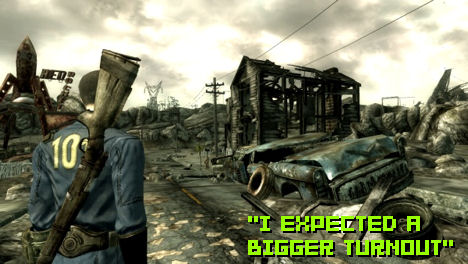 Bethesda has just announced that it will be presenting a “post-apocalyptic film festival” to be held at Santa Monica’s Aero Theater on August 22 and 23. Six movies themed around the idea of life after global catastrophe are due to be screened, including Wizards, A Boy and His Dog, and many other films that you’ve probably never heard of.

“We are very excited to sponsor this film festival with the American Cinematheque and Geek Monthly magazine as this event brings together fans of film and video games like never before,” said Vlatko Andonov, president of Bethesda Softworks. I disagree however, and think that Uwe Boll united film buffs and gamers long before … in universal hatred.

If you want to attend, tickets cost $10 and can purchased from Fandango.com. Also, feel free to hit the press release after the jump. Go on, it’ll be fun.

Fallout® 3 Film Festival to Take Place at the Aero Theatre
in Santa Monica, California on August 22 and 23, 2008

July 11, 2008 (Rockville, MD) – Bethesda Softworks®, a ZeniMax Media company, announced today that it has partnered with the American Cinematheque and Geek Monthly magazine to sponsor ‘A Post-Apocalyptic Film Festival Presented by Fallout® 3’ at Santa Monica’s Aero Theatre this August.

Fallout 3, the highly-anticipated video game from Bethesda Softworks, takes place in a post-apocalyptic Washington, D.C. where every minute is a fight for survival in the formidable wasteland and serves as the festival’s inspiration. The festival will feature six definitive post-apocalyptic movies that depict life or events that occur after a global catastrophe.

“We are very excited to sponsor this film festival with the American Cinematheque and Geek Monthly magazine as this event brings together fans of film and video games like never before,” said Vlatko Andonov, president of Bethesda Softworks. “This is an exciting time for us and this film festival gives us a fun platform to give people further insight into Fallout 3.”

“Co-sponsoring this film festival just made perfect sense for us here at GEEK Monthly magazine,” said Michael Eisenberg, group publisher at Fusion Publishing. “The showing of post-apocalyptic films that have captivated movie goers’ imaginations over the last 40 years and showcasing the definitive post-apocalyptic video game will make for a truly enjoyable festival for fans of the genre.”

Tickets will be available on July 25, 2008 and can be purchased from Fandango.com. The general admission price of $10.00 includes three movies on the bill for that day as well as a complimentary bag of popcorn, a large soda and a special Fallout 3 giveaway. Senior and student tickets are available for $8.00 per day and American Cinematheque members can purchase daily tickets for $7.00.

For more information on ‘A Post-Apocalyptic Film Festival Presented by Fallout® 3’, the movies being shown during the festival or the Aero Theatre, please visit https://www.americancinematheque.com/.

Currently under development by the creators of award winning The Elder Scrolls IV: Oblivion®, the 2006 Game of the Year – Fallout 3 is one of the most anticipated games of 2008 and is slated for release this Fall on Xbox 360®video game and entertainment system from Microsoft, Games for Windows, and PLAYSTATION®3 computer entertainment system.

Fallout® 3 has not yet been rated by the ESRB.  For more information on Fallout 3, visit https://fallout.bethsoft.com.