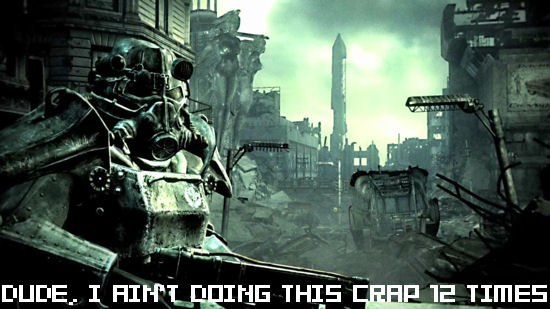 Bethesda’s brave take on the Fallout series, Fallout 3, could have between nine and twelve different endings, depending on your actions, it has recently been declared. I think Bethesda is a fan of replay value, no?

Developer Pete Hines claimed that the title would not be as open-ended as Oblivion, and is looking to have a wide choice of ways one can complete quests, instead of a wide choice of quests themselves.

“There will be somewhere between nine to 12 different endings to the game based on what you’ve done in the game,” Hines told CVG. “So it’s something that is inherently a diverging path. It may be some of the same things but doing them in very different ways, and ultimately that will define your gameplay experience.”

While I and surely many others are looking forward to seeing what Bethesda does with Fallout 3, I have to admit that upwards of nine endings may be just a little too much. I’m all for replay value, but I’ve rarely ever found that extra endings, usually highly disappointing affairs, add anything to it. Seems a bit over the top to me, but Bethesda knows best.