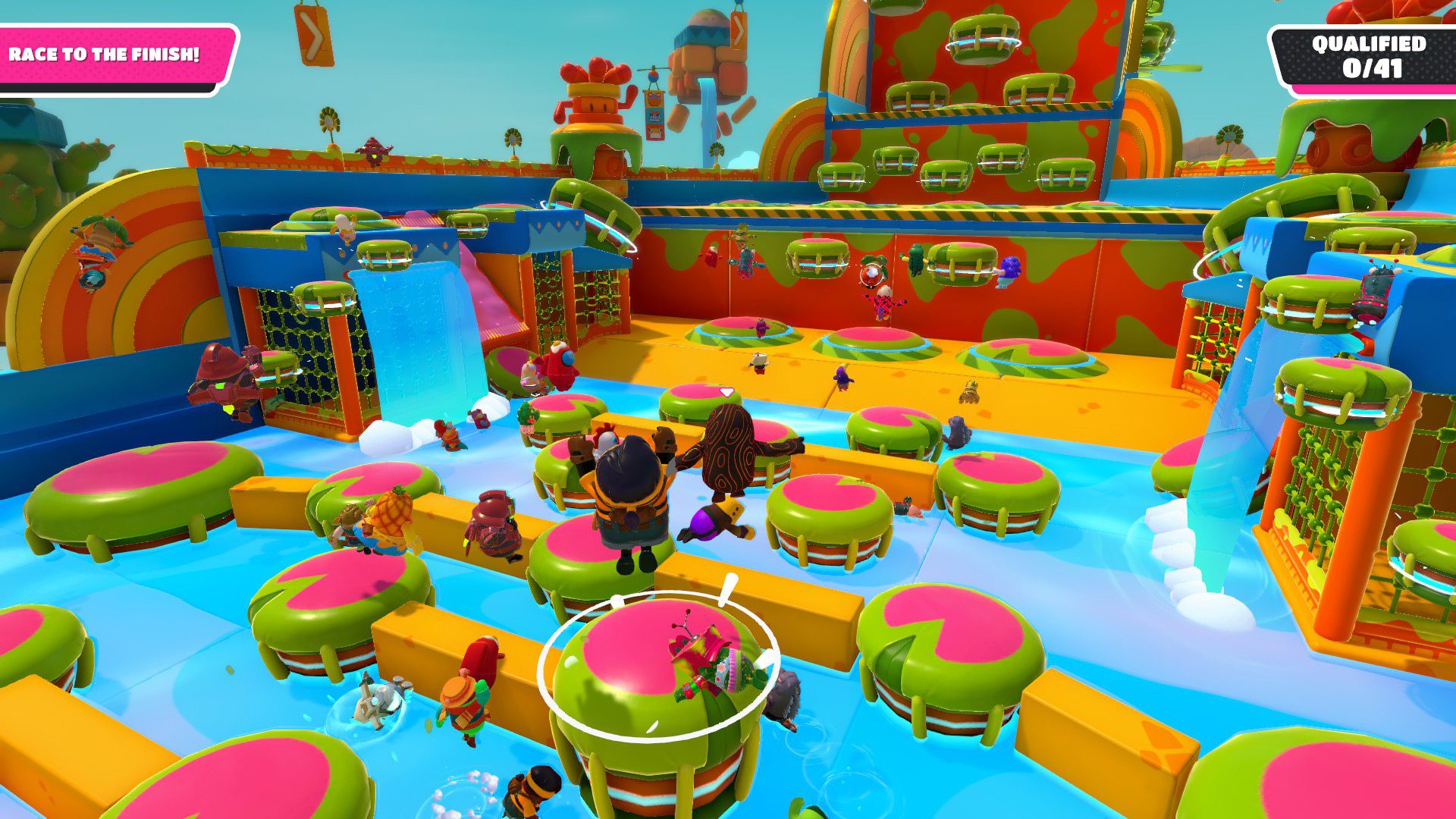 All that’s missing is a snow cone and nachos

It’s time for another Fall Guys check-in as “once or twice a season” players like me return to see what’s been spruced up. Season 5’s jungle theme wasn’t what I had pictured, but in practice, Mediatonic has come up with neat levels that speak to my inner 3D platformer fanatic. They’d feel at home in a bouncy water park, which is a perfect summer vibe.

There are six new rounds in Season 5 — a mix of obstacle-course races, slippery item-collecting, and even a maze finale that has some players complaining about bad luck. 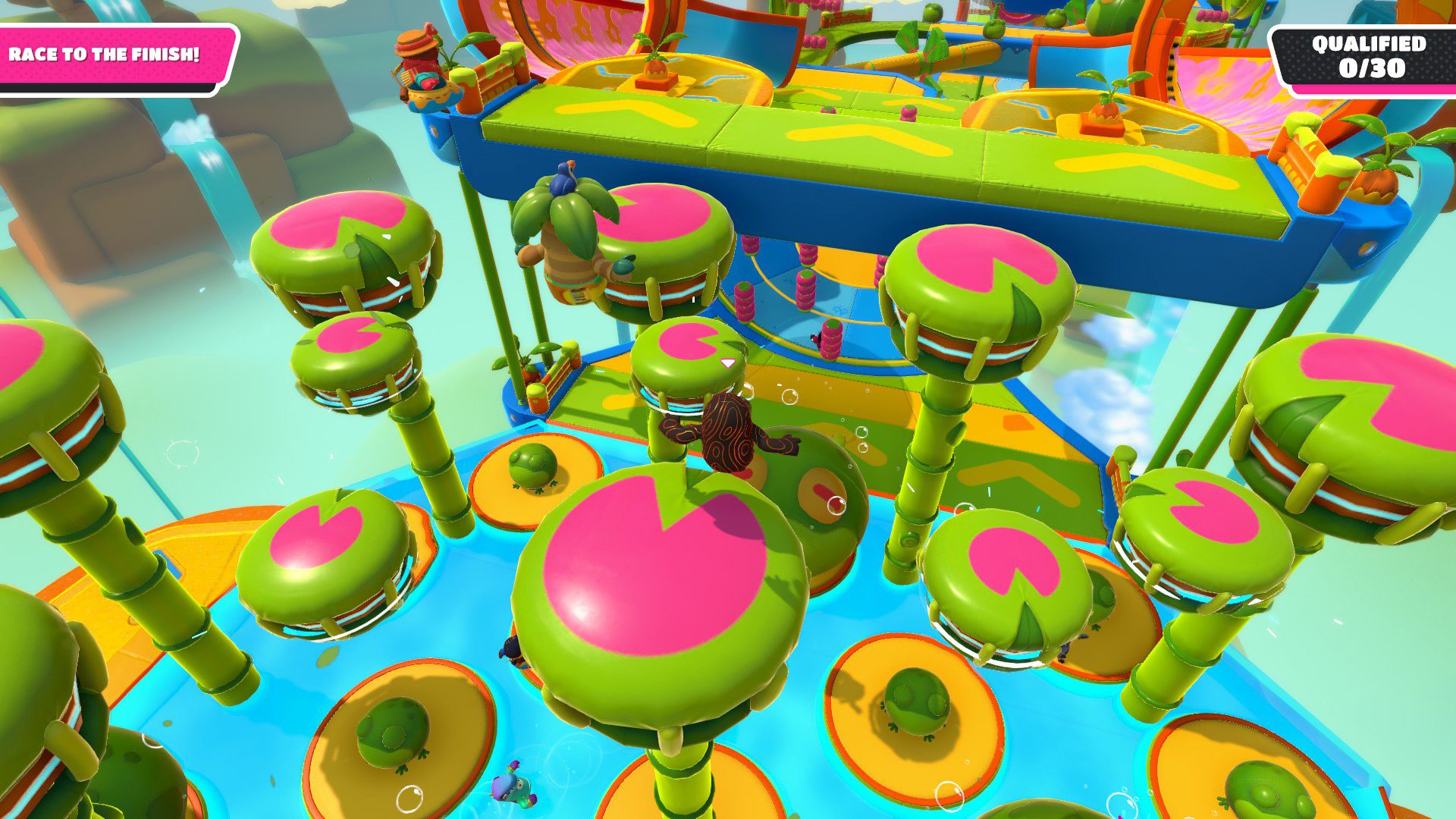 I’ll come right out and say it: the highlight has to be the lilypad “drums,” which are a blast to bounce between. They’re featured in multiple levels, but I like them best in Lily Leapers, a race with a lot of potential routes, some more challenging (and quicker) than others.

A similar stage, Treetop Tumble, throws in frog obstacles that rhythmically inflate and deflate just enough to keep you on your toes as you’re tiptoeing across dodgy walkways. 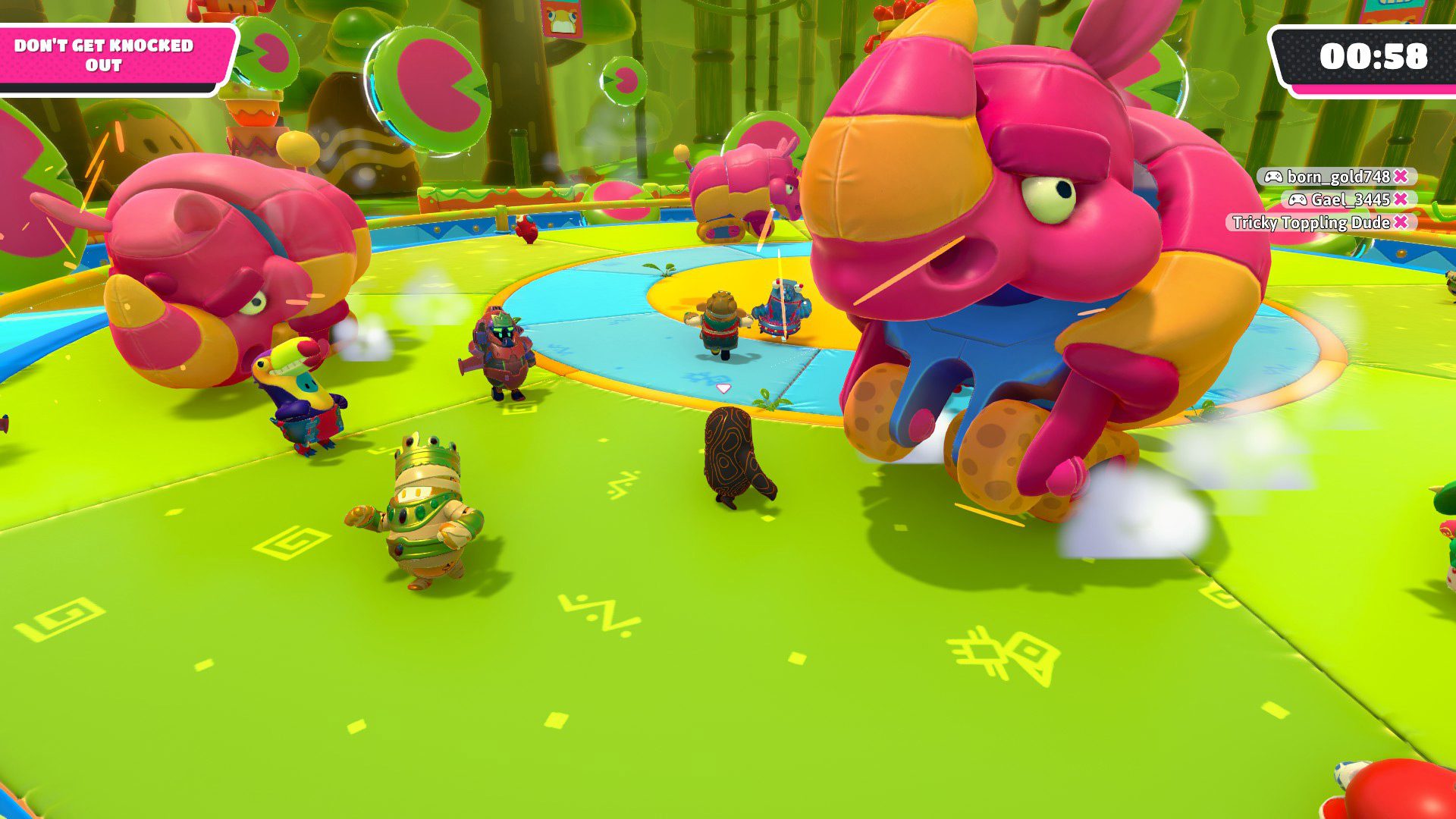 Stompin’ Ground is the wildcard level, and it feels fresh. It’s a simple setup — you just need to steer clear of charging rhinos — yet it’s trickier than it seems. Above all, I love the look of the padded mechanical beasts. The art team is flexing on this one, big time.

Circling back to my 3D platformer remark, I’ve got such a soft spot for Bubble Trouble. It’s in the same spirit as the hoop-jumping games from prior seasons, but it feels better to collect/pop bubbles, and the balancing is just right. There’s a nice risk-reward factor to sticking around one area until it’s completely tapped out versus breaking off from the group ahead of time to a different zone right before a fresh set of bubbles is populated. 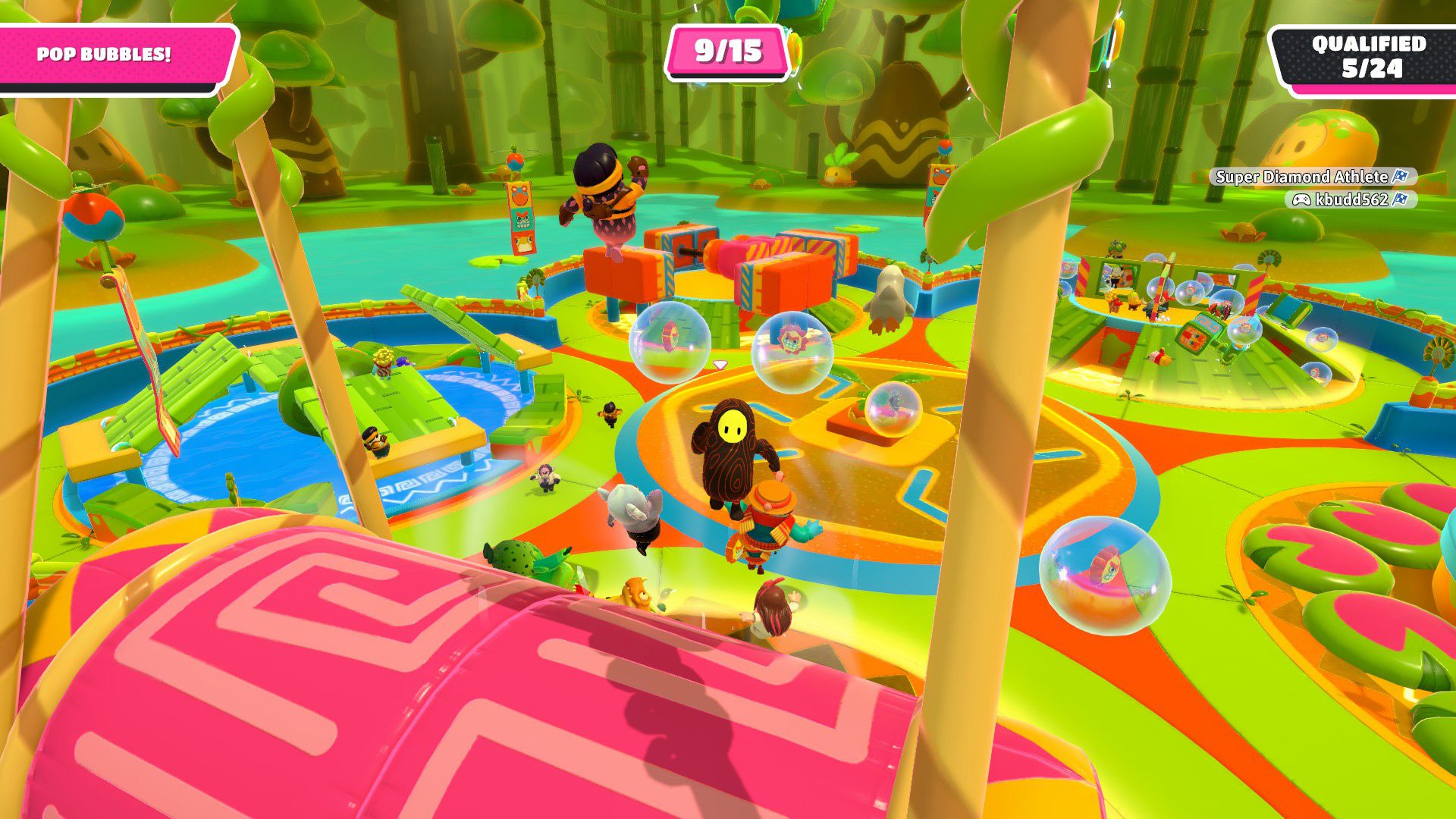 I’ve got a few clear favorites in Fall Guys Season 5, as expected, but I am surprised that I don’t outright hate any of the levels. There’s usually one in the pack.

My least-liked round is Pegwin Pool Party, due to the finicky nature of these roaming critters. If you have a Mario Party mini-game that you always fumble — to a mystifying degree — you can relate. This one’s a competition to grab and hold a pegwin for a certain amount of time, and the struggle is real. Is my depth perception really this poor?

The final round, Lost Temple, is divisive — but I feel like they all are, depending on who you ask. It’s a maze with fakeout doors and plenty of opportunities to botch jumps along the way to the hilariously, infuriatingly slippery floating crown. Day one has been brutal to watch, and that goes for me too. It sounds like certain players enjoy the map in theory, they just don’t like having so much of a “luck” factor in a final round. I feel like that’s the whole point! Some are bound to be more purely technical and skill-based than others.

You’ll also find Duos and Trios in Season 5, though I opted to play solo this time. 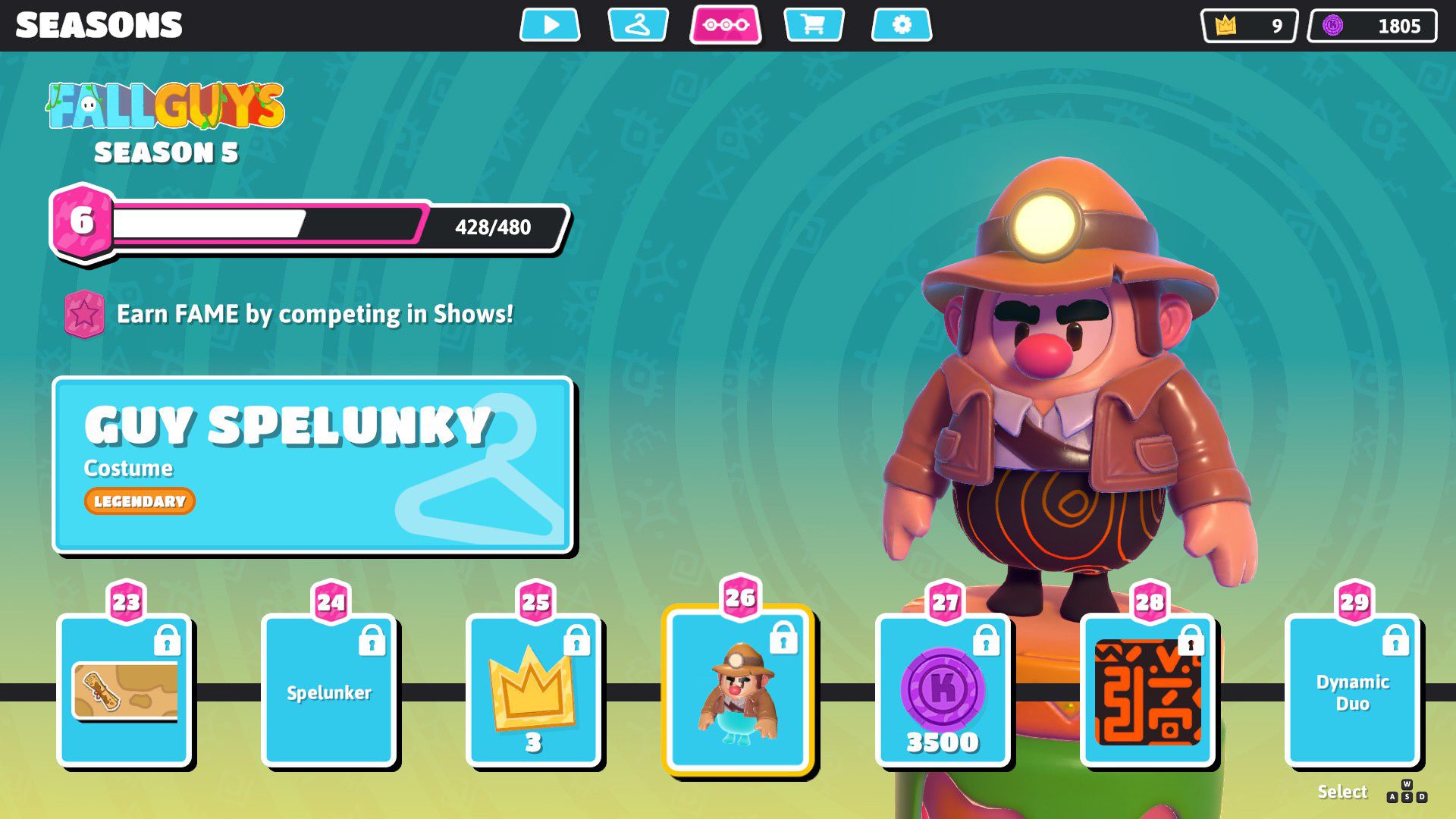 As for seasonal outfits, skins, and other rewards in Season 5, there’s a Guy Spelunky costume calling my name. You can get the Spelunky pants by leveling up your battle pass to tier 21, and the plump-nosed top will be unlocked at tier 26 — so, not too bad.

I know myself well enough to know that I’ll probably only check out Fall Guys Season 5 for one more session, if that, but I had a lot of fun with these levels today (even though I blew the finale twice). Can I stand to miss out on the Spelunky costume? Maybe, maybe not.

Even if you’re down for just a casual run-through, at least give Lily Leapers a go.