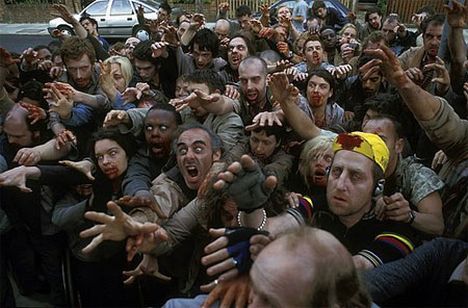 Anyway, this week’s fake game comes from forumite Farktoid, the guy responsible for yet another Dtoid fake game, Tuition. The game is Z-Day: The Zombie Wars, and it may be the only MMORPG ever concieved that I’d actually pay a monthly fee for. Not to spoil Farktoid’s incredibly detailed writeup, but it’s basically a somewhat slow-paced, nonlinear zombie survival game — and the zombies are of the slow variety, so consider it the anti-Left 4 Dead.

Hit the jump, and enjoy.

After reading World War Z by Max Brooks, a truly enthralling book that I recommend to all, I am flush with ideas for a new MMOFPS. I call it Z-Day: The Zombie Wars.

Borrowing from World War Z, I imagine a world several years past the Outbreak and Great Panic. Somewhere in a remote Chinese village, Patient Zero unleashed the infection upon an unsuspecting world, and it spread like wildfire. 3 years later, the world is overrun with Zombies, wiping out over 2/3rds of the human population. You start as one of the survivors of the Plague, willing to do whatever it takes to stop the zombie hordes and save humanity.

Gameplay is that of an FPS, but slower and more methodical than popular multiplayer games such as Counter-Strike or F.E.A.R. Players can hunt alone or in groups, moving deeper and deeper into infested territory and killing more and more Zed-Heads. Various popular FPS units are available, including your Sniper, Heavy Weapons, Demolitions experts, and medics, in addition to crafting weapons and survival tools.

Remember, if your character dies out in the wilderness, he becomes a zombie, at which point you must return to the closest waystation and continue with whatever penalty is deemed necessary.

Here is the real trick of this MMO. IT CAN BE WON. There are hundreds of thousands, if not millions of zombies out there, but there is also a running tally. Each server starts with a specific amount of zombies. Each time a player kills one, the counter drops one. Each time a player dies, the counter goes up one. If an entire server, working together, can kill enough zombies without losing too many of their own in the process, then the zombie count can dip to an Acceptable Point, at which point a World Event occurs and a final push is made by the highest level soldiers to finally eradicate the menace. When this occurs, all players on that server above a certain level receive a bonus in-game prize and a mark next to their name signifying how many purges they have participated in. This mark is above all your characters’ names across all servers, showing that it was YOU, not your character, that won the day. After that, the server resets and the world returns to darkness after several days.

Certain servers can also be deemed Hardcore, a la Diablo II. If you die, your character becomes a zombie and your character is wiped. Imagine the pride and honor that server will receive the day they rid their world of the undead plague. Other servers will include the option to REMAIN a zombie and instead hunt the living. When in Zombie mode, the character gains an XP boost, but is fairly weak and can be killed. Certain clever players will learn how to blend in and attack unsuspecting living players. Once the zombie form is killed, the player is sent back to their respawn point.

If there’s anything the whole world can get behind, it’s killing zombies. Rise up! Hold your heads high! Unite with your brethren and defend your right to live until the bitter end! IT IS Z-DAY!

Or, crawl in the muck and gank people. Whatever.

As a lover of all things undead, Z-Day sounds incredibly interesting. I also have to second Farktoid’s endorsement of World War Z by Max Brooks: it, along with The Ultimate Zombie Survival Guide, cover zombies from almost every concievable angle.

I’m still waiting for a Source engine zombie mod where the player has the ability to barricade himself in houses and run around a vast, nonlinear city and do literally anything (go to the grocery store to get food, hole yourself up in a gun shop — but be careful, because other citizens will be thinking the same thing and they might fight you for resources), but until then, the thought of a vast zombie MMORPG seems oddly comforting.