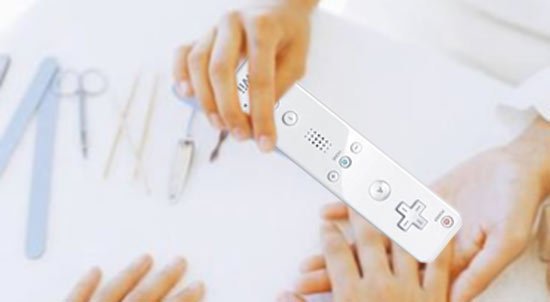 This week’s fake game comes from forumite Adamska. It’s called The Manicurist, and it looks to revolutionize the way gamers virtually clip their nails.

Always dreamed of clipping nails all day, every day, but eventually ran out of cuticle space to harvest? The Manicurist — which is, of course, Wii exclusive — may be the game you’ve been waiting for.

Hit the jump for the lowdown on Adamska’s mad idea.

The Manicurist
Nintendo Wii (cause all the innovative games go there)
Players: 1 – 4
ESRB: Teen for bloody fingers and toes

You’re a manicurist who must battle the evils of hangnails and cuticles. Oh the horror of people with bad feet and the likes of fungus. Ew.

You play as Amy Tam, a rookie manicurist who just joined the force (Did I mention that this is a force of super a Asian women?) On your first day you meet your new partner, Candy Cho, who gives you a tutorial:

–Start Tutorial–
“Hey Amy! Wave your wight rand!” (And you swing the Wii-mote like there’s no tomorrow.)
–End Tutorial–

Oh no! Some fat women want their feet to look beautiful in order to mask their massive stomachs!

But the fat women are too much and their massive stomachs over power Candy who is lost in a sea of polyester and fashion magazines. “ROH NO!” As the week rages on, Amy Tam must prove that she is the best manicurist.

Are you the best… The best Manicurist?

Frankly, I don’t know if this is my type of innovation. I’m not a foot person, and I had a chronic fear of getting my nails clipped as a child. Is that weird? Am I the only one who found that terrifying and potentially painful? Probably.

Anyway, think you can do better? Hit the official thread and show us your moves.