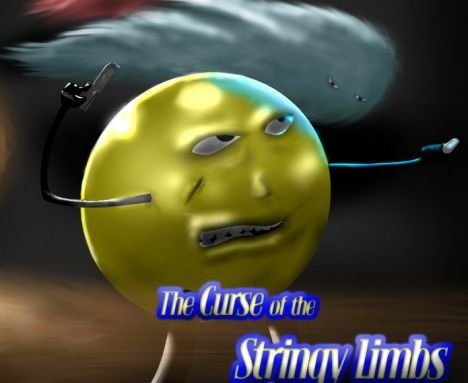 The format for these Fake Game Fridays is typically set in stone. Usually, a forumite posts a fake game idea, I go to Fronz, and Fronz makes a Photoshopped image of the game art. But in this instance (as in others), the forumite went so far as to create his own cover art, and, I have to say, it looks pretty badass.

The game? Paction Man: The Curse of the Stringy Limbs. The creator? Ugly Phil.

Hit the jump to see one man’s vision of a yellow warrior gone mad (not to mention the full, awesome, uncropped Photoshop). 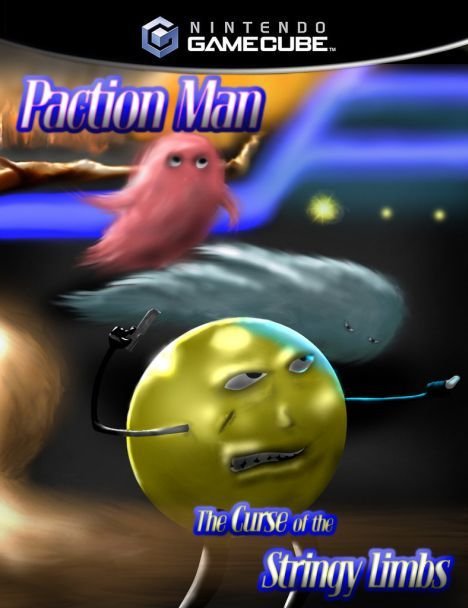 Paction man comes to all consoles June Two thousand and never! And when I say all consoles, I mean every console that ever existed, even the Magnavox Odyssey!

In this game, you play as Paction Man, the cursed being, whose arms wielding guns of steel and explosions turn a once classic game into a joke for all the 5 year olds to lap up and for all the pompous whiny bitches to make cancer jokes about! Yes, this is the next generation of gaming; turning your childhood memories into great corporate sodomisation, without a slight on what these might have once meant to someone at some time. Kill ghost, despite the fact that they are already dead! Blow stuff up and see the same scripted fire effects over and over again!

It’s like what they did to sonic, except this is never actually going to happen, so thank your lucky stars there isn’t someone retarded enough to do it.

I choose the gamecube not because i dislike it or am displaying any opinion about it at all, but because the only thing that really made it towards the end of the generation was ports, usually this kind of crap.

What kind of gameplay can you forsee for Paction Man? Pellet-chomping bullet time? What about a spinoff sequel where two of the ghost brothers go rogue and turn into vigilantes? Hit the comments, or the official forum thread, and let your voice be heard. Everyone who posts a decently detailed and won’t-result-in-us-getting-sued gaming idea will (eventually) be featured on the site. So make with the imaginin’.