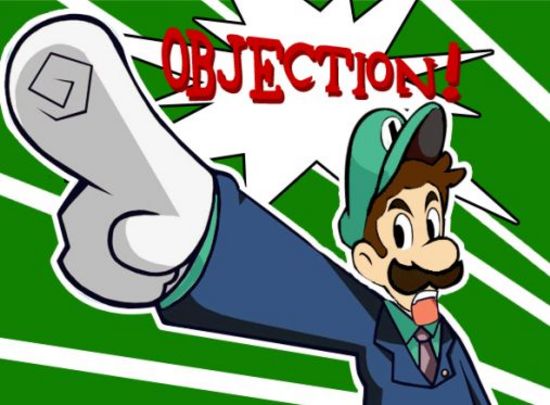 This week’s fake game was conceptualized and attractively Photoshopped by pissedcheese, a man whose alias conjures up all manner of unpleasant mental images. In case Luigi’s suit and exclamation didn’t clue you in, cheese came up with Luigi Mario: 1up Attorney, a parody/spinoff of the Phoenix Wright series.

Defend some of Nintendo’s biggest celebrities against the crimes that made them famous: Pauline vs Donkey Kong, Bowser vs Mario, Peach vs Anyone Who Thinks Peach is a Huge Bitch.

pissedcheese actually made two Photoshops and a reasonably detailed gameplay synopsis, which you can (and should) read after the jump.

Mario was always off doing his adventures. Saving the Princess and overthrowing Bowser. He always loved the spotlight. Myself, I stayed behind and tried various things. Hunting ghosts was a gig for awhile. I couldn’t stand it and I went to study law. Now I’m a rookie defense attorney. I am:

A text based game for DS very similar to Phoenix Wright, however this time it’s Luigi on the stand, and he’s ready to protect Nintendo characters from crimes. You use the microphone to yell “Objection!” and use evidence to protect Nintendo Heroes from injustice. Use pizza to level up your arguing skills (you get pizza based on how well you argue your case). Interrogate your witnesses on the stand to prove your charges innocence. You are Luigi Mario, 1up Attorney.

Example of a Case:

Sitting in his office on a boring saturday, Luigi has something catch his eye on the news. Donkey Kong, an old buddy of his, is being tried for kidnapping.

“On friday evening,Pauline,a super model,was found on top of a construction site.She was tied up and screaming for help. Though, she couldn’t scream because her mouth was taped. When officials finally untied her,she said a familiar giant ape did it. Donkey Kong.

Police imediately arrested Mr.Kong, who did not struggle and looked very confuse. A good allibi. He is currently being held in a detention center.”

Luigi didn’t hear the rest of the story, because he was hurrying down to the detention center to see what happened.

Can you help Luigi defend Donkey Kong on his first case as a Defense Attorney?

I dunno — on the one hand, I’d love to defend Donkey Kong, but on the other hand, he did kidnap Pauline (we’ve got pretty irrefutable evidence of that fact). Still, I’d play it.