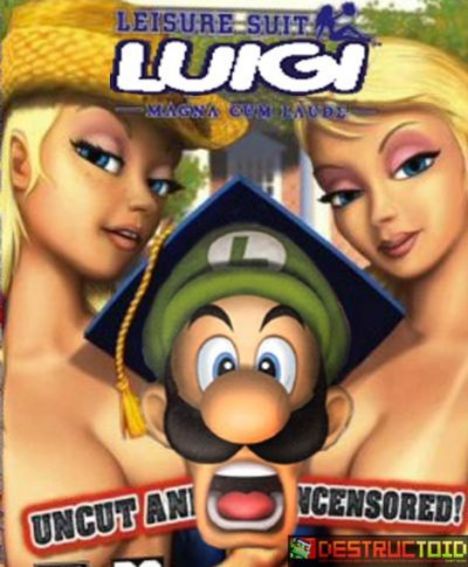 Another week, another fake game. This week’s fake game is brought to you by Dtoid forumite blueskies. His (I’m assuming it’s a him) idea combines the innocent platforming elements of a Mario Bros game with the raunchy, sex-driven escapades of a Leisure Suit Larry game. The result?

Mario is off saving the kingdom, so what’s his “permanently in the shadows” brother to do? There’s no giant scary mansions to vacuum, so he may as well hit the town, and try to get laid!

Using his “tall, dark, and silent” charm on the ladies might not do the trick, but being the lower end of the celebrity duo has GOT to help him score some tail from the finest babes in all of the Mushroom Kingdom.

Can you help him “lay some pipe” and “suck the competition away”?

Will he finally score? Or will he fall short, and settle for spending quiet nights alone with nothing but ghosts and his vacuum?

Frankly, I think this could be the Wii title to shut up all those naysayers who assert that the Wii is “just for kids.”