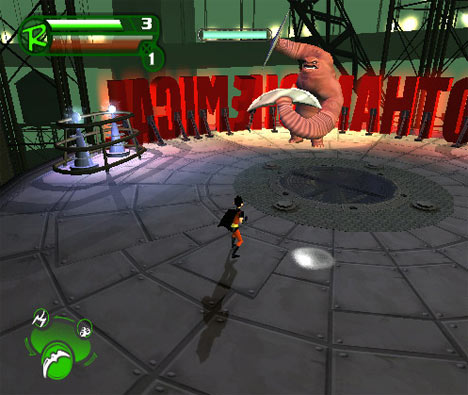 Thanks to Dtoid reader twentythoughts for sending in this week’s Fake Game Friday article. Instead of starting from the beginning though, I’ll show you his conclusion to give an idea of what his game’s like, and let you wonder how the gameplay descriptions would make this game work well:

“So, as a summary: Open-ended Metroidzeldavania-style platform/action game where half the fun is figuring out how to combine your abilities in order to get through an area while effectively fighting off your enemies. You don’t get one new item that you can use on one particular obstacle, but rather one new ability that can be combined with up to four others and chained with up to three others. There. That’s my idea.”

It’s quite the broad topic, but after reading just a few sentences of his gameplay details I immediately invisioned his amorphous hero as Clayface from the Batman series. So I ganked the screenshot above from the game Batman: Rise of Sin Tzu, but if you read the full write-up after the jump, you’ll see the picture is almost exactly the game twentythoughts is talking about.

Got a Fake Game Friday idea of your own? We’ve had some realistic suggestions recently — let’s see you Dtoiders come up with something so risky and crazy that it would make ESRB ratings board people vomit on their violence checklist. Send your messed up masterpieces here and we’ll pick the best of the worst.

Back in the day, I actually (really) won a PlayStation with an Earthworm Jim-like game called “Red Jelly“. It was about a jelly guy who went after an evil lawyer who was planning on taking over the jelly factories of the world. The idea was that the jelly guy would attack and do other stuff by morphing all or parts of his body: For instance, his hand would turn into a hammer as a general “hit” attack.

Now, take this morphing jelly guy idea, and make it a Metroid-like structure (in a 2D or 3D environment), where you start out with just the turning-your-hand-into-a-hammer-and-hitting-stuff ability, and jumping. Hitting stuff, while being all you can do, is actually pretty useful: You can hammer nails, break stuff, kill things… Yeah. Nice and basic ability to have, along with limited jumping and running.

Now, make the hammer ability and jump ability fill one of four slots, each corresponding to a particular button on your controller. If you’re playing this with the PlayStation controller, you can stick them into four separate ‘combo’ slots, which correspond to the shoulder buttons. Combining the hammer with the hammer might unleash a slower, more powerful charge-style attack (for hammering down or breaking harder stuff, or doing more damage). So, stick the hammer on the Square button and the Hammer on the R1 button, and holding R1 and pressing Square unleashes a charged hammer attack.

Here comes the fun. The first jelly factory you come across works like a Zelda dungeon, basically. You walk around fighting enemies and solving hammer-related puzzles until you come across a boss, a corrupted jelly critter like yourself, that attacks you with hooks for hands. Hammering it into submission, you find yourself absorbing it. Now you get a new ability. Which one? You guessed it: A hook attack. So now you can hook stuff. Grab enemies with your hooks (ow!) and toss’em. Hang on to poles. Hook your hands into stuff and pull it. Anchor yourself to the ground by hooking into it. And, if combining your Hook (R2) with your Hammer (Square) or the other way around (R1 and Triangle, which is where you stuck the Hook ability), you get a Pickaxe attack. Which you can dig into soft rock and dirt with.

A bit of exploring and secret-finding with these abilities eventually leads you to another factory. Here, you find a corrupt jelly monster that stretches. Absorbing it, you find the Stretch ability. Setting it to the Circle button, you can now stretch your arms out straight in different directions to hit stuff. Or, combining it with the Hammer, you swing an outstretched arm in a long arc, and smack it down a longer distance away. Or, holding down R2 (hook) and hitting Circle, you can stretch your arm out, hook it into stuff, and swing around Tarzan-style or even Ristar-style, gathering speed before flinging yourself far away.

The game would go on like this. Killing a Spring boss, you would be able to jump higher, and bounce off walls by timing your button presses. Abilities would be able to be chained, too: First hook into the ground, and then press and hold the Spring combo button along with Jump, getting those springs good and tense and springing you high into the air once you let go of the Hook button.

Now, figuring out these things would be part of the game. You would be given the initial information on how you set abilities to buttons and used that setup to combine different abilities, and then given a gentle encouragement to experiment. The more abilities you’d get, the more possibilities you would have. How about hooking your stretched arms into a properly placed pole so that you were dangling between two walls, one of them slightly cracked-looking, using the Spring ability to bounce between them to gain speed, and when you though you were going fast enough (perhaps indicated by looking kinda blurry), hold the Hammer combo button and hit the Ball button. Now you’re a wrecking ball, and boy, are you smashing through that wall.

Finally, you would be able to have different abilities in your Combo slots than on your Action buttons. So, you could have Jump, Hammer, Hook and Stretch set to your face buttons, and have Ball, Spring, Float (which, as its base ability, turns you into a parachute-like thing and allows you to float) and Separate (allowing you to throw parts of yourself at stuff) at the shoulder buttons. Finally, this would be an open-ended game. While just playing through the game would likely be a short affair (10-ish hours), different paths to each factory would require different abilities and combinations, and within each factory, you would find different routes leading to the boss encounter. Finding every secret in the game would require combinations not used in the main game, and getting a hundred-percent map completion would mean getting through all the routes. This would also make for good replay value, as you could take different roads through the game when starting anew.

So, as a summary: Open-ended Metroidzeldavania-style platform/action game where half the fun is figuring out how to combine your abilities in order to get through an area while effectively fighting off your enemies. You don’t get one new item that you can use on one particular obstacle, but rather one new ability that can be combined with up to four others and chained with up to three others. There. That’s my idea. – MrPerson –