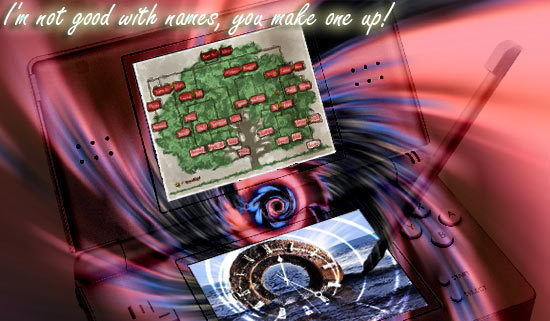 This week’s much-belated fake game, created by forumite Chwoka, can be briefly described with the following sentence: “YOU’VE GOT A FREAKIN’ TIME MACHINE. AND IT’S AWESOME!”

I’m aware that technically, that was one complete sentence followed by an incomplete one, but the point still stands: Chwoka‘s game, I’m Not Good With Names, You Make One Up is basically an experimental title that tests how time travel can potentially be used in the realm of videogames. It’s a very interesting concept, and one that — to my mind — really hasn’t been explored enough outside of games like Day of the Tentacle.

After admiring the above Photoshop by our very own Fronz, hit the jump for a rundown of Chwoka‘s ideal videogame.

NAME: I’m not good with names, you make one up.

PLOT: Multiple, but the main one is YOU’VE GOT A FREAKIN’ TIME MACHINE. AND IT’S AWESOME!

PLATFORM: A floating one. Oh, wait you mean console. Probably the DS, with the bottom screen handling the Time

Machine and the top controling everything.

EXTRA INFO ABOUT TIME MACHINE: Think DeLorean with a backlog, powers to visit any created timeline, and movie

DESCRIPTION: You start out as a kid going over to a scientist’s house. You get there, and find a watxch with a note

that says “Meet me at the beginning of time”. Now, you COULD…but you COULD just skip over that and come there

later. He won’t know the difference! Anyway, it’s a huge, huge world with a timestream cource from coming into

existance to going out of existance. Rather than having many static timelines, you have a Family

Tree/Achievements/What If engine that says “If you injure this person, does this affect some acheivment? If so,

how?” “If you kill this person, how does this affect the family tree? How do the widows of the non-existant

decendants cope?” “What if something happens that givwes them a new acheivment/edits a old one? How?” And then

procedurally generates how the rest of the timeline plays out. You can name the timelines, too. Like “President

Reagan dropped on head as child multiple times” or “Orville triplets?” or “ZOMBIES EVERYWHERE!” Also, thee would be

this thing where you can do multiple plots. Go back in time to the age of fantasy and learn to spell cast! Go into

the future and run around on the MOOOON! Go to the twisted near future and play through a Resident-Evil knock-off!

The possibilities are more limitless the farther you go back!

Well, I’d definitely play it. Think you can do better, or do you have a game idea you’ve been itching to get off your chest? Hit the official thread and post your thoughts.