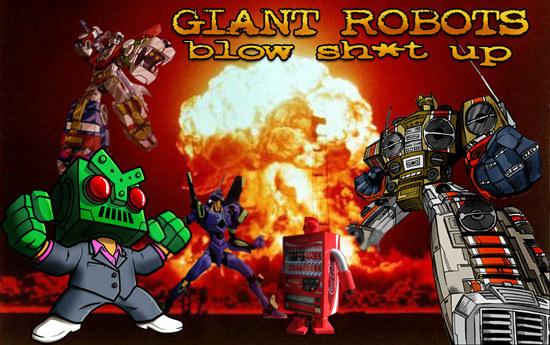 Today’s fake game comes to you courtesy of forumite BigPopaGamer, and, as always, has been conceptualized in a Photoshop by our own Topher Cantler. It’s called Giant Robots Blow Sh*t Up — and guess what it’s about?

You know you’re going to enjoy a game proposal when the genre is described as, “MMO/Giant robot/RTS,” so hit the jump and see exactly what Giant Robots Blow Sh*t Up is all about.

Or, alternately, you can always go to the official Fake Game Friday thread and submit your own idea. If it’s chosen, we’ll give you a shiny new Photoshop representing a screenshot or title screen from your game, and you’ll be featured on the homepage. Sort of like this.

Well here’s an idea that me and a co worker were throwing around.

Objective: to be the baddest giant robot pilot warrior in the world

Plot: Take a page out of the MechWarrior or Armored Core universe and set it to an MMO. But the major points would have to be that there is an ongoing war and you are but one mech pilot in the war. Along the way you will discover conspiracies, sometimes involving other players.

Gameplay: The greatest thing that seems to get people frustrated with MMO’s are that they become a grindfest sooner or later. Well imagine the fun you used to have in the MMO PVP arenas and put that into entire worlds.

The player would create a pilot and decide what he/she wants to become. Are you a noble warrior for the ‘good side’, an evil, emotionless villain for the ‘bad side’ or are you simply a mercenary, out to make as much money as you can for any side. Each of these choices would have consequences, such as being a mercenary you are rewarded with money but it costs more to keep your mech upgraded and in good repair whereas a pilot from one of the factions can go back to a resupply depot and get repaired and rearmed for free or at a small price. The tradeoff with choosing a faction is that the customization options may not be as great, but you might be eligible later on for the big guns that the military develops only for their side. After choosing a side the player then decides the kind of core mech he would like to pilot, scout, gunner, artillery etc. From there, the customization is endless, as long as the parts you buy can fit into the mech and there is a hard point for the weapon or armor as well as extra tonnage left over to carry it. You also will have to decide what kind of ammo to put in the weapons that require it such as missiles or cannon shells.

As the player levels up, the pilot’s stats go up, such as reflexes, stamina, etc. The mech is only leveled up by buying new parts and such, which as you level up and are promoted in the military, new parts become available to buy and eventually, all new mechs. You can also scrounge parts off of your fallen enemies mechs. You would level up by destroying foes on the battlefield and completing mission objectives as well as destroying mobs in the regular world that take the form of patrols or battle groups sent by the opposing faction. At certain level threshholds, you become eligible for promotion and if you meet the requirements, you are promoted. I think this should really be decided by the game masters themselves, as you can’t have all high level players being the generals. There are no high end dungeons in this game, only huge battles to take part in and if you survive or complete your army’s objective, you are rewarded.

Now the key concept to this game is that it needs to be continual evolution. Any base/city can be taken over by one side or another if certain objectives are met, such as destroying the command center. As the actual players in the game complete objectives, the developers continually evolve the story to match it. If any faction in the war becomes one sided, the dev’s can simply increase the difficulty of the NPC’s for that faction. If one faction loses all bases and command posts, your character can choose to become a mercenary or join another faction.

If you are a mercenary and only a merc, then you can join together with other people to form a merc ‘company’ or ‘guild’. The leader then decides ranking, what kind of armaments to keep handy for his warriors to use and how much each person gets as a bonus for completing a mission given to you. If you are a small group of highly efficient players, then each player gets a larger cut from the standard pay and a good bonus, plus it’s less likely you will need to rebuild your mech after a battle.

Graphics: This is where it would limit people. To fully appreciate the world this game would be, your computer would have to be a pretty good gaming machine to run it correctly. You can’t do a giant robot game with WoW graphics.

Setting: This game should span several worlds, all the size of say, one of the continents in WoW. Each world should be different such as a desert world, ice world, jungle world etc. Certain tactics might work well on one world but not on the other.

I’ve never quite been able to get the hang of games like MechWarrior or Armored Core, so GRBSU probably isn’t for me. Still, the idea certainly sounds solid; would you play it?