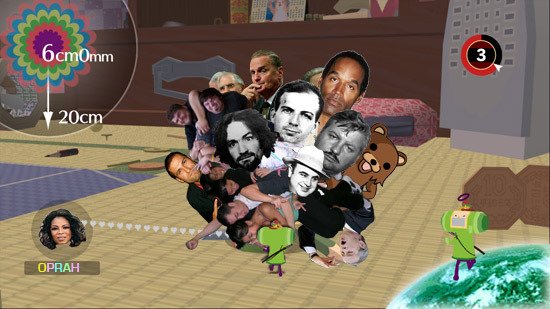 I must say, this week’s fake game is officially one of my favorites we’ve ever showcased. Submitted by Aoi Tsuki and goddamn brilliantly Photoshopped by our own Topher Cantler, Desu Baaru (“Death Ball”) combines the fun, carefree gameplay of Katamari Damacy with the distinct charm of the Manson Family. Listen to Aoi Tsuki’s idea for yourself, and then bask in the glory of Topher’s fake screenshot:

It’s the fun, wacky mating of Death Note — in which a young man discovers a notebook in which you write people’s name to kill them — and Katamari Damacy, the lighthearted quirkfest that took the world by storm via rolling shit up into a big ball! You roll through various levels of square-edged hilarity, making new stars out of rapists, murderers, child molesters, and any who would dare stand in the way of their new Prince, Kira! But watch out: roll up too many innocents, or bash into L before you’re big enough, and the King of All Cosmos will squash you like an overripe apple! Coming soon to an acid trip near you.

I’d definitely play it. As always, if you want to submit your own fake game idea, hit the official thread and let us know about the game you’ve been dying to play which, due to technicalities and red tape, does not quite exist yet.