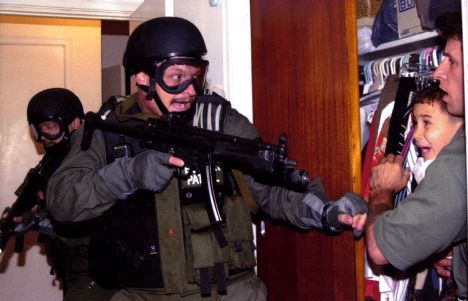 This week’s fake game comes from michiyoyoshiku, a forum member who has more letters in his name than actual posts.

If you need an idea of what the game is like, simply look above: imagine the Elian Gonzales case turned into a rip-roaring action-adventure title.

Hit the jump to see what michi is talking about.

His original post has not been edited, to preserve the author’s intent:

“Ok here’s my idea for a game

You are a Child Welfare agent, Your Job TO TAKE NEGLECTED KIDS INTO CUSTODY BY ANY MEANS NECESSARY. This includes Beating the neglectful parent with your CWA issued assult while screaming “GET ON THE GROUND YOU CRACKWHORE” (more colorful than that but you get the idea. Now you have a choice you can do you job and take all the right kids in OR you can bring the wrong kids in while your job is not effected if you go the other route the community will be looking out for you and you’ll face more resistance trying to do your job.

Much like Narc you can also take the contraband substances the parents are using and use them yourself for enhanced abilities in assuiring our children’s saftey.

But the main draw of the game……Beating people sensless and calling them a Crackwhore.

My favorite part of his idea? The fact that “Crackwhore” is capitalized.

What do you think of Child Welfare Extreme? What powers would you have? What would the levels consist of? Would Elian Gonzales be the final boss?

As always, hit the comments or the official thread to submit your own fake game idea. Each week we choose a different submission, so your chances are pretty good unless it’s just an addition to an existing game, or something that could get us sued just for posting (sorry, electro).