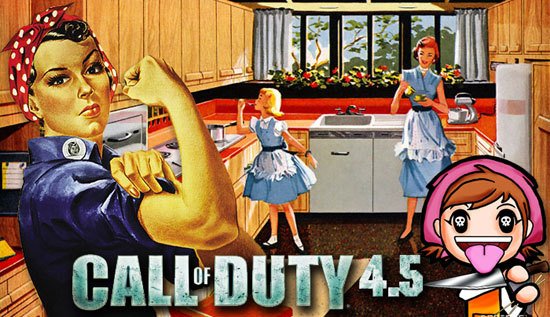 It’s been a while since we’ve highlighted any mildly sexist game ideas here on Fake Game Friday. Time to remedy that.

This week’s game idea comes to you courtesy of Twisted Imp (and Photoshopped by our own Topher Cantler), who has evidently longed to see a game which portrays women during wartime as strong, positive, patriotic characters — that, or he wanted to create a videogame which teaches women to stay in the kitchen, no matter what.

Call of Duty 4.5 follows the women back home during WWI, WWII, and the Iraq War; how do they deal with the loss of loved ones? How do they cope with a life without husbands or sons? How do they endure? Call of Duty 4.5 asks none of these questions, instead opting to fill its length with minigames focusing on buying groceries, cooking dinner, and vacuuming.

Hit the jump for Imp‘s full scenario, complete with a free poster you’ll get for pre-ordering at EB Games.

It takes place in WWI,WW2 and in Modern Warfare and is a spin off of the series involving the woman of the war.

WW1 Segment of the Game :

Your man is out to war and what can the women do to help?Walk on down to up to 12 different stores and buy double the food of what you need, while you stay home and package more than half of what you bought to send out to the army boys!Remember ladies,a fed soldier is a good soldier! Make sure you don’t have more than you need or else you can get arrested or killed!As a bonus side quest you get the opportunity to vote!

WW2 Segment of the Game:

Once again your man is out to war but this time you want in!Come along on the ride that is war.{SPOILERS}One of the first missions you do is you attempt to attack the enemies base but during this,in a tragic turn of events you break a nail.{END SPOILERS}Half way through WW2 you are forced to work in the kitchen where you must prepare the soldiers a hardy breakfast,lunch and dinner.You go girl!Near the end you play as a woman who didn’t join the army, and your task is to hide jews and black people in your house, you better hope those nazis don’t find them!Or else it’s curtains for you!

Modern Warfare Segment of the Game:

Now this is MUCH more advanced then the past two wars.Technology has changed alot, in this war you start off working in the kitchen but with much more complex appliances. Good luck with that there microwave/stove with optional night vision for when your on those late shifts!When the boys come back, be sure to get that laser guided vacuum cleaner their will be dirt everywhere from their boots.If you fail a mission don’t expect to be shown a quote about war from a dead person, expect a reading from one of Martha Stewart’s articles on house keeping.

There you have it, also if you pre-order it from EB Games you get a free poster. 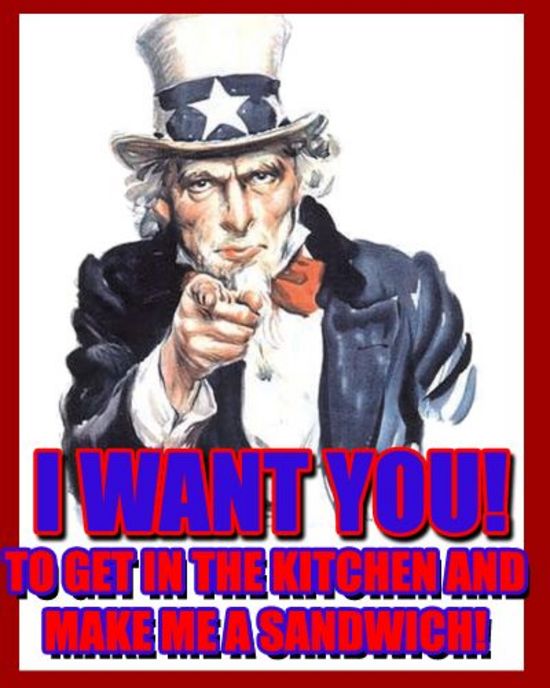