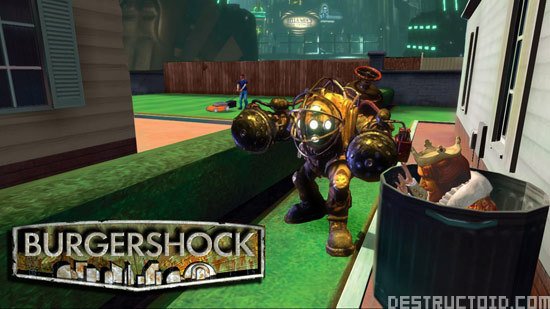 From a title conceptualized by our own Brad Rice and Photoshopped by Topher Cantler, this week’s fake game is one for the record books.Considering both Sneak King and BioShock are based off the Unreal 3 engine, why not combine the two titles into one ubergame?

Just imagine it: Ronald McDonald spends decades and millions of dollars setting up a utopia under the ocean, complete with a residential facilities, medical care, and a Playland jungle gym for the kiddies. Yet not all is right with this ostensible paradise. For while the residents of McDonaldLand seem to live in peace and harmony, they are truly impoverished in the most tragic of ways: they have never felt the taste of a flame-broiled Whopper. Not once have they experienced the succulent majesty of a Chick’n Crisp sandwich. Not so much as a single BK Stacker is to be found within the walls of McDonaldLand…

Which is where you come in.

As The King, it is your duty to travel to McDonaldLand via bathysphere and introduce its citizens to the power and the glory of the Burger King dinner menu. You’ll hide in trash cans, you’ll sneak past Whopper-hating Big Daddies, you’ll give Kids Meal toys to Little Sisters, and you’ll surprise the numerous (and, by now, insane with irritation toward their enforced diet) residents of McDonaldLand with many different items from the Burger King menu. For while Ronald McDonald’s underwater city is built off the premise, “No Gods or Burger Kings, Only Man,” you know better: you know that a slave obeys, but a man chooses to help himself to any one of the eight items on the BK Value menu.