A crate did the job of my floor mat this afternoon when I found one sitting in front of my door after having spent an hour or two outside of The Fortress of Metal (aka Nicholson HQ). Thinking bomb, I didn’t mess with it, opting instead to walk around the massive wooden box to get into my apartment. A few minutes later, I came to realize it was probably videogame swag — something I need to get in the habit of reporting to the FTC like a good little American.

So with jaw clenched and a hockey mask for protection, I ventured outside to have a proper look at the obstruction. It smelled like cedar, which I took as a good thing. Explosive devices, I’ve been told, smell like burnt toast or Nick Chester after a few hours of vigorous Rock Band play. Thus, I brought it into the apartment and took out the nails by hand and teeth.

Well, what did I find?

At E3 09, I had the opportunity to play with the Freedom and Squeeballs. The device is much like a Wii Remote with a bit of extra oomph to it. The game is a party title with a ton of mini-games for use with the device.

I was told at the event that the controller would ship with the game in a bundle.

But Squeeballs isn’t just an Xbox 360 title. I found a copy of the Wii version of Squeeballs, called Squeeballs Party, buried underneath the plush stuff.

With the breakable item removed, I decided to allow my 16-lbs cat explore the new stimuli introduced into the environment. Hannibal likes new things, but she doesn’t like holes. She tends to get stuck in them. So like a good owner, I decided to take the Squeeballs to her, putting them out one by one. After a few hisses and a couple of swipes, Hannibal the Mighty bolted to the safety of the underside of the couch.

Her squished back legs protrude from the bottom when she does this.

So, fact: cats don’t like Squeeballs. Also, I received some swag. 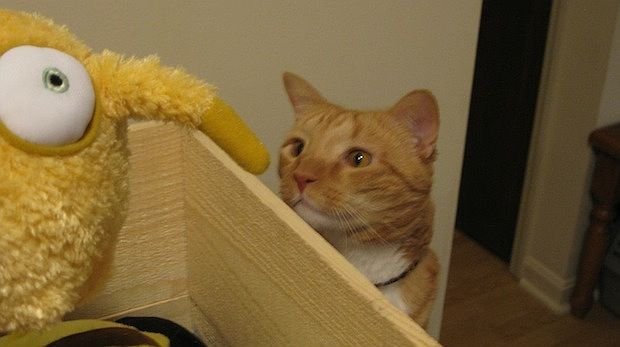