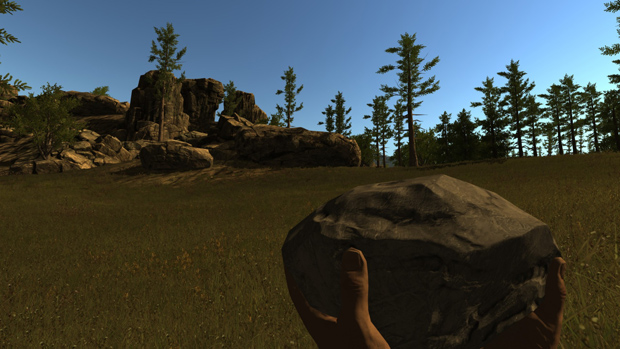 ‘We?re going to be working hard to help you justify spending that $20’

In a Rust development update, Facepunch Studios’ Garry Newman wrote that “Sales have been strong. Stronger than strong. We really have been knocked on our arses by sales. Our plan was to release the alpha on to Steam in a low-key way and slowly build up steam until the game was in a decent state. But our player counts have exploded our wildest dreams.”

Between this, DayZ, and Starbound, it feels like the Steam Early Access floodgates have opened. I’m still not sure how I feel about that. Some of Facepunch’s priorities right now are improved server and client performance, better support for Mac and Linux users, possibly removing zombies before players become too attached to them, and stopping cheaters.

And then there’s discussion of adding defensive options. Just last night I was playing Rust with Conrad — you truly do want friends in a game like this — and we got to talking about how much we’d love to have traps to take on home invaders. “We want to find solutions that allow the defending players to find innovative solutions to attacks,” said Newman. “Ideally solutions that don’t involve putting a million doors in your house, or building a maze around it.”

Even in its bare-bones state, Rust is without a doubt one of the more interesting games I’ve played in years. Now, is it fun? I’m not so sure. It can be, but it can also be deeply frustrating.