There’s no denying that the Fable franchise is a feather in Microsoft’s hat when it comes to exclusive titles. The original game attracted many players as then PC-bound luminary Peter Molyneaux’s big console debut, helping  raise the Xbox’s profile as a haven for “western-style” RPG development. A year later, PC owners got their own taste of the game with Fable: The Lost Chapters, a port which included an epilogue chapter set in Albion’s Northern Wastes.

And even more than its predecessor Fable II, cemented the franchise’s status as a “pillar” property of Microsoft’s lineup, and stayed exclusive to the Xbox 360, skipping a PC release entirely.

Fable III, however, has deigned to grace PC users with its presence, and Lionhead have made a pretty big deal about their making sure that PC gamers could enjoy the game as much as their console comrades, by taking into account the differences between the two platforms and working out solutions that suit it best.

Do their claims ring true? Just how well does Fable III PC play?

[Note: This is NOT a review, but rather the impressions of a PC gamer who likes to buy his games on that platform if he can. If you’re looking for a score, please read Jim Sterling’s official review of the game. Fable III PC is identical in terms of content and core gameplay mechanics to the 360 original, so most praise (and criticism) should apply across platforms. Also note that I’ve cropped some of the screenshots used to emphasize certain portions of the interface.]

Can your PC run Fable III? Well, as I don’t know what kind of PC you’ve got I can’t answer that question, but I can tell you about what I’ve got, which ran Fable III just fine.

I played on a system equipped with an Intel core i7 920 CPU, an ATi Radeon HD 5850 graphics card (Catalyst drivers version 11.2), and 6GB of RAM, running the 64-bit version Windows 7. These days that’s considered a upper-mid-range PC, and the card can be had for less than $175 from some vendors. The combined pricing of the parts today go for roughly 60% of what I paid when I built the machine.

According to Fable III‘s Steam store page, my rig falls relatively far ahead of the game’s minimum system specs (there are no “recommended” specs). I played at 1920×1080 resolution. 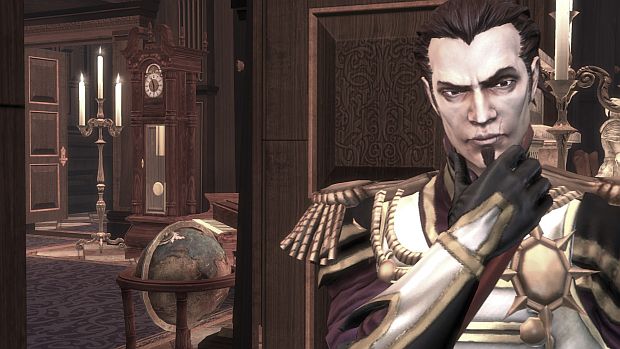 Fable III‘s graphical customization options were fairly robust, and didn’t require a game restart or external program to alter, making it easy to tune the game to one’s taste. Factors like water reflections, draw distance, texture detail, and shadows can all be altered.

Vertical sync is also available, but is strangely implemented. Instead of eliminating screen tear locking the framerate to my monitor’s refresh rate (60Hz = 60 fps), turning on Fable III‘s v-sync caps the framerate at a hard limit of 30fps. While this eliminated screen tear, the game “felt” considerably slower, and the slight motion-blur effect applied to animation was much more pronounced. At times characters appeared to leave shadowy after-images, like the blurred silhouettes from The Matrix‘s bullet-time sequence. Long story short, it’s pretty ugly.

Thankfully, disabling v-sync eliminates the cap (and the motion blur ugliness) at the cost of slightly less even performance. According to the benchmarking program FRAPS, my framerate climbed into the hundreds during some indoor scenes, but dropped below 20fps during intense combat along the game’s largest panoramas.

I was able to run the game at maximum settings on every slider, but with shadow detail and water reflections turned down to “normal”, with no appreciable loss in graphical quality. Anti-aliasing was also disabled, but Fable III‘s generous use of light bloom and aesthetic blurring made the dreaded “jaggies” practically invisible at my chosen resolution. 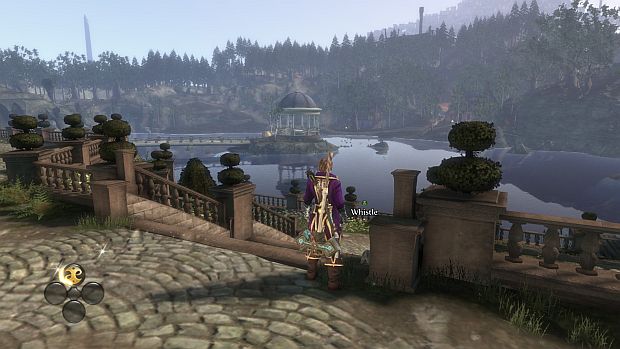 Speaking of panoramas, the PC’s extra horsepower was put to good use in improving the game’s maximum draw distance. Areas that were obscured by fog were completely available for viewing, with the only inconsistency being that the extra distance did not apply to NPCs, leading them to, at times, suddenly appear out of thin air as I approached populated areas.

That said, the extra range made combat using guns feel almost unfair. The extra precision offered by using the mouse in manual aiming mode made dispatching multiple enemies before they could close in a little too easy.

Lionhead made a lot of noise about Fable III‘s UI even back before its PC release. The team was heavily dedicated to creating as unobtrusive an interface as possible, almost entirely eliminating the traditional HUD and squirreling away most of the game’s functions into the “Sanctuary” hub area.

For the most part this philosophy has held true in Fable III PC, though Lionhead has made some significant improvements to take into account the differences between a keyboard-and-mouse setup and an Xbox 360 controller. Both input methods are supported, and in fact can be used simultaneously, switching seamlessly between the two without needing to be toggled manually. This was quite a boon, as I preferred to use a gamepad for movement, but often grabbed up my mouse to score headshots in gun mode. Even the visual button prompts changed automatically to suit whichever input was being used at the time. It’s a slick, smart move, and more games would do well to copy it. 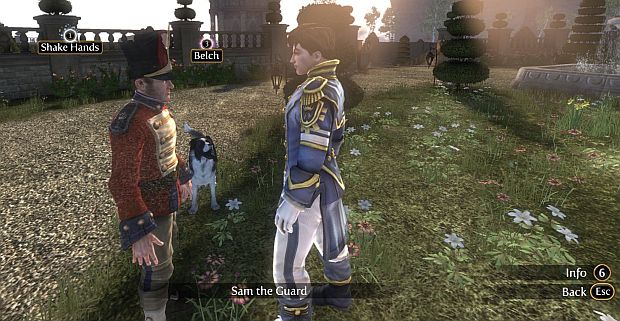 The core gameplay mechanics of Fable III are virtually unchanged from the original game, but some changes added for the PC version have a significant effect on how the game plays.

When using an Xbox 360 pad, the game controls identically to the console version. However, switching to mouse-and-keyboard alters combat mechanics slightly. Whereas each attack type in Fable III was bound to a specific face button (such as hitting X for melee attacks and B for magic), the mouse-and-keyboard controls are more “modal”, and replicate the method of selecting weapons in a first-person shooter.

For example, hitting the “1” key enters melee mode, and all attack keys (the mouse buttons) initiate attacks, blocks and flourishes. That remains the case until one hits the “2” or “3” keys, in which case the player would draw his/her gun or charge magic, respectively. Similarly, items are bound to the function keys instead of d-pad inputs when using a mouse-and-keyboard setup.

This modal system can have an effect on how combat is approached. When playing mouse-and-keyboard I often found myself sticking to whichever mode I selected at the time, only changing when in the clear, whereas with a gamepad I usually just pressed whichever button was most appropriate for the range of the attacker. Aiming spells and shots was also easier, as aim is attached to the facing of the camera (which is controlled by the mouse) rather than the leaning of the right analog stick. I rarely missed a flourish or misdirected a fireball while using the keyboard and mouse.

The game also includes a “challenging” difficulty mode that disables health regeneration. While this sounds like a minor change, it did encourage me to act much more carefully in combat. When playing on harder difficulties I no longer stood still, charging area spells with impunity, and was forced to ration my health potions and food for times of great need…until I became rich as sin through my real estate ventures and could buy all the potions in the land, anyway. Sadly, there are no Achievements or special rewards for playing the game in hard mode. 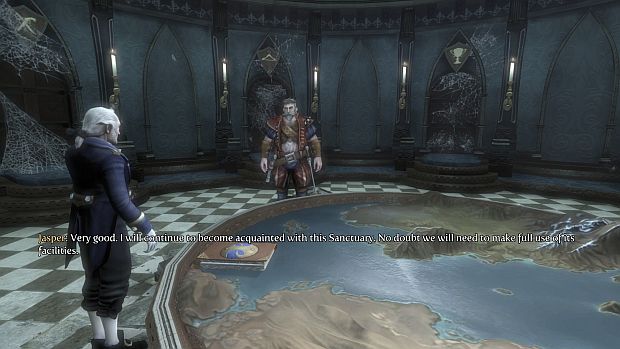 First, owned properties can now be managed entirely from the Sanctuary’s map table. One can simply zoom into a town, “highlight” an owned property under the magnifying glass, and hit a button to access its settings, such as purchasing properties or businesses, adjusting rent/prices, evicting tenants and so on. Better still, a single button press while on the map can be used to repair all owned properties in an area, or even globally (provided the player has the necessary amount of gold). Considering some complaints about the original, this change is incredibly convenient for would-be real estate magnates.

Also, the game now supports multiple save slots per character. Entering the Sanctuary’s “Save Room” now displays several “statues”, each representing an available save slot. Slots can be overwritten at will, and the game also maintains an autosave for players who would rather not bother with manual saving. 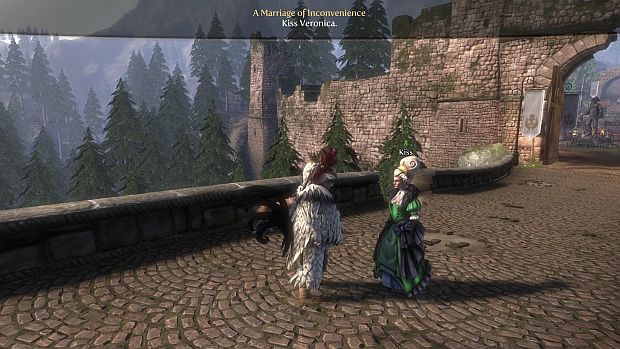 It should be noted that Fable III uses the Games for Windows LIVE platform, like Dawn of War II (pre-Retribution), Dead Rising 2, and Fallout 3. This includes copies bought at retail or on Steam. Steam users will end up running two overlays (Steam and GfWL) alongside their game. Obviously, this shouldn’t surprise, since Fable III is a Microsoft-exclusive game. On the other hand, Fable III PC players who also own an Xbox 360 can enjoy having achievements attached to the same gamertag, if they care about that sort of thing.

However, I’ve found that GfWL, particularly its marketplace, has become generally more convenient to use than in previous iterations (though still not quite up to the level of some other major competitors). The ability to buy and install DLC is much improved from the days of struggling to even search up Fallout 3 packs, and the store now counts in real money rather than Microsoft Banana Dollars.

Currently, all the content available for the console version is also available on the PC, including the Understone and Traitor’s Keep quest packs. The game itself comes with the free items included with the Limited Collector’s Edition, such as free weapons, the Hunter’s Lodge building, some outfits, a dog potion, and hairstyles.

As we were furnished with a pre-release download code for the game, I was unable to test the game’s multiplayer options. The entire “Live” room in the Sanctuary is available for access, though, and I have no reason to believe that functions have been stripped out or cut from this port. 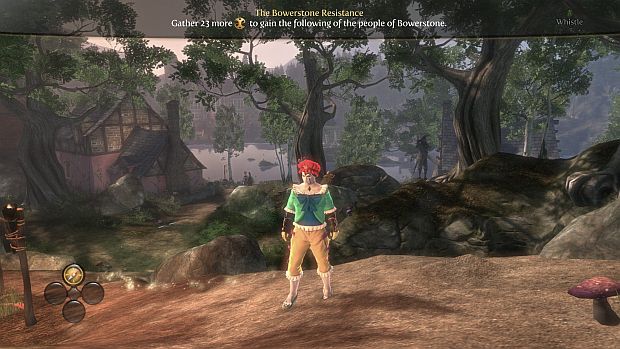 While Fable III‘s console release was criticized for being quite unstable (to the point that Lionhead openly solicited bug reports from the community), my experience was largely hassle-free. Of course, the operative word here is “largely”.

The game’s fast-travel system is still unreliable, sometimes depositing me practically on top of a quest objective, and other times leaving me at the farthest entrance to the world area. Fable‘s signature “breadcrumb trail” guide is also finicky, and at times took a while to highlight a path that was not leading straight up a vertical cliff.

Disappointingly, I encountered the infamous “Jasper glitch”, which caused Jasper, the John Cleese-voiced butler living in the Sanctuary, to refuse to talk or interact at all, standing there silently and creepily staring at me while I went about my business. Thankfully, the game’s new multiple-save feature allowed me to revert to an older savegame and circumvent the bug. In attempting to replicate it I believe it is related to picking up new legendary weapons after some point in the game. To see it still infecting the PC release, six months after it was patched on the Xbox, was quite a bummer. 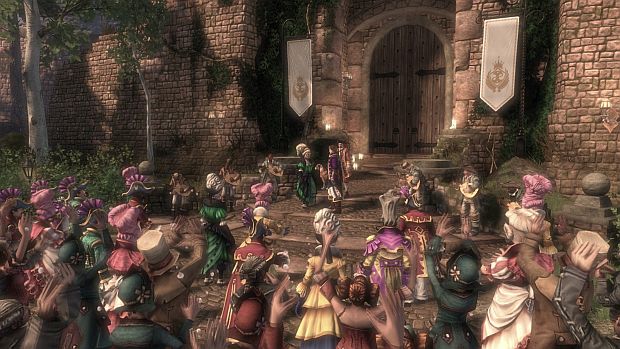 All things considered, Fable III‘s PC experience was a pleasant one. Lionhead clearly put thought and effort into making the PC version as good as it could be, as well as adding improvements to its general usability and technical prowess. Aside from the presence of some bugs that should no longer exist, any criticisms to be leveled at the game are best directed at the design, rather than the quality of its transition across platforms.