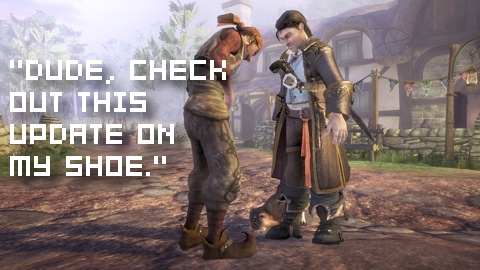 Today, the official Fable 2 site was completely revamped. Other than a more streamlined look, a new section called “Tales of Albion” was added. Tales of Albion will be a three-part saga of the Fable universe. The first part of the new series is entitled “Fragments of the Old Kingdom,” which explains the creation and subsequent destruction of Albion.

The story begins when three extraordinarily powerful people arise from something called the Void. After busting out of it, they decide that they want to call themselves “the Court” and nab some land. Unfortunately for the denizens of Albion, they lived in the closest town around. At first, the citizens resist the would-be conquerors’ attempts at submission, but after three separate struggles, give in to the enormous power. After years of torture under the grip of the Court, a hero is born. The boy, named William, would grow to have enormous power, and eventually defeat the Court with the Sword of Aeons.

The story continues on, and definitely relates to the story of the original Fable. If you’re a fan of Fable 2, head on over to its website and check out some more of the exciting back story. The other two sections of the Tales of Albion, called “The Destruction of Ancient Albion” and “The Fall of Heroes,” will each progress along the universe’s timeline, presumably reaching all the way to the beginning of Fable 2.