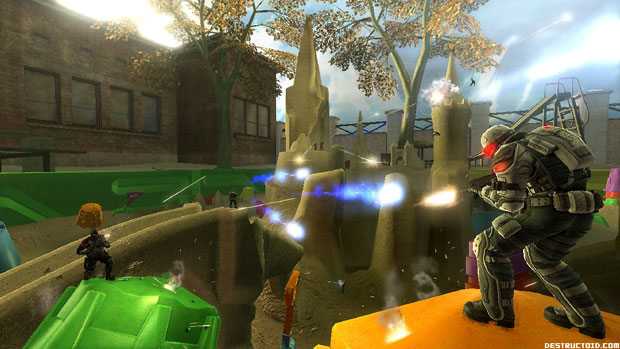 If you’ve blown threw the single-player campaign of F.E.A.R. 2 and are already tired of the multiplayer, today’s free “Toy Soldiers” download pack might be for you.

Available now (or soon, depending on when you’re reading this) on Xbox LIVE Marketplace, PlayStation Network and PC download portals, the pack contains three maps unlike any found on the F.E.A.R. 2 disc. Monolith has really gone a little crazy with these three, too — a pinball machine, a hospital lab, and a sandbox. Oh, and you’re really, really tiny.

Yesterday, I was given the chance to take three maps for a quick test drive. Hit the jump for impressions, and the best trailer for anything you may ever see… ever.

As soon I we started a game of traditional Deathmatch on the first “Toy Soldiers,” I realized just how out-there Monolith had gone with the maps. Called “Toy Soldiers” as an homage to small, green toy army men figures, each map has you playing as a “tiny soldier” in an oversized world. While each map is obviously influenced by the F.E.A.R. 2 universe, they don’t really tie into the fiction in any meaningful way.

The first map, “Cockroach,” takes place in a blood-soaked hospital room. You’re ablo to climb up onto laboratory equipment, or walk up an electrical cord to reach higher ground, perfect as a sniping point. A potted plant in the corner of a room held a hidden weapon, and it’s possible to sneak around behind the walls of the room. There’s even a sink filled with water, a floating sponge sits in the middle. Unfortunately, the sponge is static — it doesn’t bob or move in the water. Falling in the water is an instant death; some interesting strategy/gameplay could have come out of an unstable platform, for sure.

The next map, “Recess,” takes place in a huge playground sandbox. It’s the largest of the three maps, with steep hills and a gigantic sandcastle that sits in the middle, filled with goodies like the most powerful weapons. Interestingly, little green army men are scattered throughout the level, and actually look a bit like the in-game player models. It’s possible to blend in if you stand still, too; I spent more than a few moments trying to headshot a plastic army man. It doesn’t work.

The last, and my favorite of the maps, is “Full Tilt.” In this bizarre map, you play inside a pinball machine. While it’s not modeled after any one real pinball machine, the retro 1970s-style table is based off the fictional “Snake Fist” character mentioned in F.E.A.R. 2’s single-player campaign. You can take cover behind bumpers, spinners, and flippers, firing at other playrs as authentic pinball machine sounds ring in the background.

Like the sponge in “Cockroach,” with “Full Tilt” I’m disappointed that the environments aren’t more interactive. The flippers, for instance, don’t move. There’s no rolling pinball hazard. While hitting bumpers will cause the backboard to light up and the scoreboard to keep a score, there’s no real incentive to do so. It’s still a fun map to play on — one that has a far different feel than anything you already have on the disc — but if the new environment affected the gameplay in a more significant way, that might be nice

Still, it’s hard to complain about the three maps, as they’re free. They’re certainly inventive, like some crazy, user-generated MODs with the production qualities of a AAA developer. Is the “Toy Soldier” pack going to be enough to get people to pick up a copy of F.E.A.R. 2 if they haven’t already? Probably not — it doesn’t significantly change the way the game plays in the same way that Criterion’s free Burnout Paradise updates did. But if you’re already got a copy sitting on the shelf, you owe it to yourself at least give them a whirl.