When it comes to racing games, there are true racing experiences, and then there are arcade racing experiences. Almost entirely different genres, one is methodical with how it portrays racing, and the latter is all about recreating a white knuckle experience that feeds the adrenal gland more than the mind. Split/Second, if it is not obvious, is in the second category.

How else can you describe a game that not only throws racing mainstays like manual shifts and speedometers out the window, sends even bulky trucks on the road easily blowing 200 mph in their wake, and outfits every player with the ability to manually blow up a city to change a race? Well, this isn’t Gran Turismo we are talking about. Brad had a chance to check it out at GDC, and I was fortunate to get some more hands-on time with the game.

The biggest draw to Split/Second is how it deals with power ups. While games like Burnout rewards with nitro, or a game like Blur brings Mario Kart-esque power-ups, Split/Second asks players to blow the hell out of construction zones, airports, and downtown cities, all in hot pursuit of those in the lead. Imaging blasting at 175 mph down a strip, only to have two idle cars in the nearby parking garage explode straight at you from the side, instantly knocking you out. This ain’t missiles and turtle shells, that’s for sure. 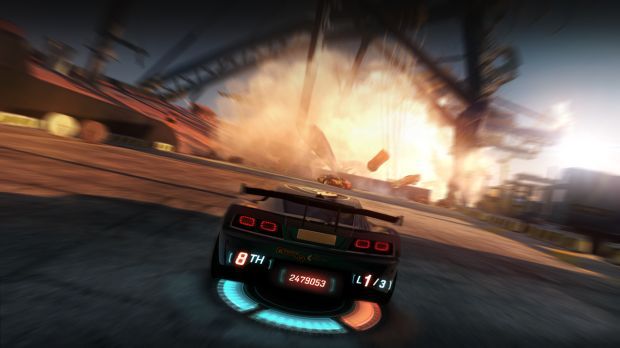 Some of the crazier actions I saw in the three levels I experienced included dropping a space needle on top of six cars ahead, blowing the top level of a freeway out from beneath other racers, calling a helicopter to drag the remains of a massive dump truck up behind cars, or even summoning an airplane to fly down a runway and explode on impact, as well as upon every car that might be racing underfoot.

These  “Power Plays” are insanely epic, and from a purely visual element, it makes a race look like the craziest car chases you’ve ever seen. They also range from huge, one-time only, level changing events, to smaller reusable explosions that, while less effective, can send out shockwaves that make driving much more difficult. As Black Rock Studio’s Studio Ambassador, Jay Green says. “There’s always a rule. You need to make each lap different.” Helping communicate when to use power plays are icon that pop over opponents that generally indicate that now would be a good time to use the attack.

Earning Power Plays is a pretty simple affair. Underneath your car is a meter that fills with every drift, draft and action worth making. There are three slots, with the first two that fill up being the smaller blue Power Play, and if you fill up all three, you can use the Super Power Play, which are the much more exciting and devastating actions. 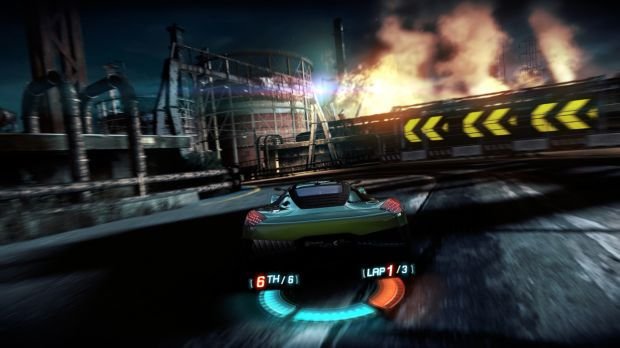 Also, certain short cuts can only be gained with Power Plays, with icons on the course and other cars indicating a good time to use these actions. It’s simple to figure out, and also rewards players for knowing the attacks on the track. There is a minor risk vs reward factor too, as some people would want to store their power plays for the big red super power plays, when they should be really using the smaller blue ones. And before you think all of the explosions and destruction might be…tacky, the official “plotline” is that the racers are racing in a “made-for-TV city” rigged up with explosive. Um, k?

While many other modes in single player and online multiplayer are going to be available, I was only shown the standard online race mode, as well as a mode called “Survival”. Brad was shown this as well, but there seems to have been some updates since GDC. Cars will be racing against a series of big rig trucks around an industrial city drain. Points are made every time a car passes these big rigs, and racing past three in a row results in a score multiplier. Screwing with things are the barrels falling from behind the trucks, coming in two flavors. Blue barrels send out shockwaves, and the red ones will instantly blow your vehicle up. For the last thirty seconds, the game enters sudden death, and as cars are picked off permanently, this is a perfect time to score some last minute points with fewer opponents to deal with.

As far as cars go, there seems to be three types: super fast and light supercars, more powerful and drift heavy muscle cars, and trucks that can withstand a lot more damage and can really go fast once accelerated. Initially, many people used the lighter cars, but later moved onto the trucks more capable of withstanding all the crazy business. Of course, on the more twisted of levels resulted in truck racers getting spend most time in last place. 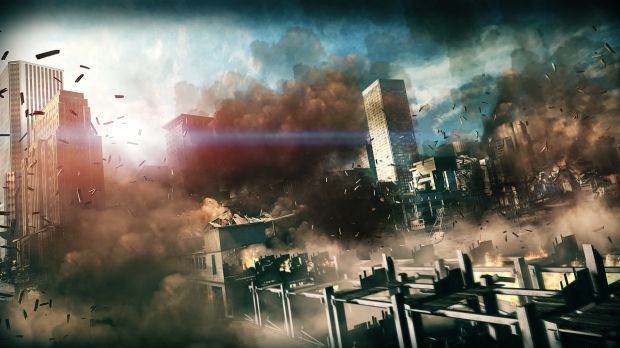 In motion, Split/Second is a stunning game to look at. There is some stunning lighting effects, coupled with fantastic usage of sold blacks against motion blue and lens flares, this game looks hot, especially in motion. The explosions and smoke are some really incredible stuff, and even the basic menus are smartly designed. Split/Second is one of the most stylish racers I’ve played in a while, and there is strong feeling of awe as whole buildings slowly crumble in front of you, all while you cross your fingers (and toes) that you can zip under it before it collapses entirely.

My time with Split/Second was only a couple of hours, but I’ll admit it: it was one heck of a gleeful experience. And you can tell I wasn’t the only one, as shouts would go up from across the room as other writers would yell from come crazy event going on in a race. It is an insane experience, and between this and Blur, fans of arcade racers should have some interesting options later this year.