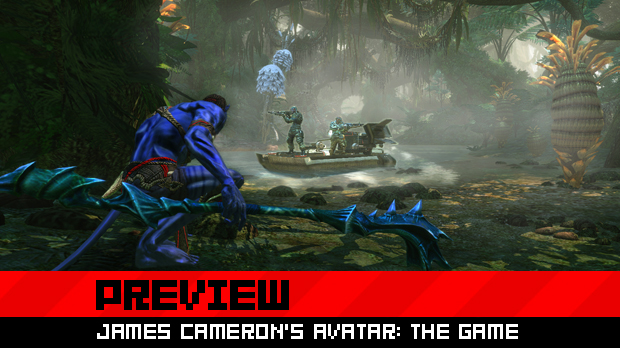 If you’re into movies at all, then you’ve no doubt heard about James Cameron’s Avatar. It’s being hyped up as the movie event of the century and like any potential blockbuster, a videogame is being developed on it. Unlike most typical videogames based on movies, Avatar: The Game is a prequel and sets up the events that take place in the film.

Ben PerLee brought us a preview of James Cameron’s Avatar: The Game for the Wii which is a little different than the PlayStation 3 and Xbox 360 version of the game. I got to check out some of the single-player for Avatar this past week and you can get all the details on this Smurfs in space game after the break.

Before getting hands-on, we had the choice to play Avatar with Stereoscopic 3D. The game is gorgeous on its own, but the addition of 3D glasses really makes the game pop out (pun totally unintentional.) However, I got a headache after about a half-hour of the 3D visuals and decided to play the game normally instead. The 3D feature is a great touch, but I’m curious to see how well it is received as 3D technology isn’t all that wide spread in households.

Quick back story on the game and movie: The Resources Development Administration (RDA) came to the planet Pandora to harvest a special mineral that fetches a ton of cash back on Earth. The Na’vi, the ten feet tall blue aliens that inhabit Pandora, wants none of this and are at war with the RDA. The RDA have created a program called Avatar where RDA soldiers can basically pilot Na’vis created by the RDA. This was done so the RDA can infiltrate the Na’vi in order to destroy them from the inside.

Anyway, on to the game itself. Players will begin Avatar as Abel Ryder, a soldier for the RDA. Abel is a signal specialist called up from Earth to join the Avatar program so he can help the RDA find a sacred site on the planet Pandora. The Na’vi also learn about this sacred site and wants to prevent the RDA from taking it over.

In the beginning, players will run through missions as Abel himself. After a couple of missions, Abel will jump into an Avatar and do missions as a Na’vi. About a half-hour or so into the main game, players will come to a choice. Will you continue to side with the RDA and destroy the Na’vi or will you join up with the Na’vi and go against the RDA?

Once you’ve made your decision, there’s no turning back. The main difference for both sides is the story line but they both have similar goals (RDA trying to kill Na’vi, Na’vi trying to kill RDA). The RDA soldiers rely on a wide assortment of guns and heavy machinery while the Na’vi use hand-to-hand weapons that make their part of the game feel like a brawler. Aside from the weapon differences, both sides feel the same.

Players can have four weapons at a time plus four special abilities. Both sides have the use of special abilities that can give them a quick boost in speed, turn them invisible, stun enemies and many more. Every special ability has a specific recharge time — the stronger the ability, the longer it will take it for you to be able to use it again. Each side has access to 15 weapons and around 20 special abilities over the course of the game.

While on Pandora, you’ll encounter a wide range of enemies. There are small dog-like creatures to large, dinosaur-like creatures. The RDA side has it even worse as the plant life will attack them (they won’t attack the Na’vi). Everything you kill will earn you experience points which you can use to get yourself better guns, more special abilities, armor and so forth. The experience can also be used in an optional mini-game that plays like Risk. Players will go to a war room with a 3D map of the entire planet. You’ll use your experience points to build up troops and take over other parts of the planet. Making progress in this Risk-like mini-game will earn you some rewards.

The environments you’ll be visiting are huge, to the point that it’s rather ridiculous how huge they are. Avatar uses a refined version of the Far Cry 2 engine but the environments are designed in a very linear way so there’s not much in terms of large open spaces that I saw. There is a wide assortment of vehicles — land, sea and air — on both sides which help getting around the large maps. Plus, the Na’vi are able to teleport themselves through special teleporting trees.

Avatar has a lot going for it, but at the end of the day, it feels like your typical third-person action shooter. The game has a very Gears of War style feel to it minus the cover mechanics. There’s the main story you have to follow plus side quests you can take from characters along the way. It’s hard to take the dialogue exchanges between characters seriously unfortunately as the character animations are very stiff.

The game is overall impressive considering this is a movie tie-in game. The levels are huge and there’s going to be a lot for players to do to keep them engaged for awhile. There’s even a built-in Avatar Wiki that was written by James Cameron himself.

Now the question is will people trust a movie tie-in game? Actually, the real question I have is will Avatar the movie be anywhere as good as the hype is building it up to be.

Avatar: The Game does have a multiplayer mode that I got to check out but you’ll have to check back on November 24 to hear what the versus mode is all about.

Filed under... #Destructoid on assignment#Hollywood#Ubisoft