[Seymour embarks on a journey of swords, discovery, the desert, and cross-dressing. I really hope the comments turn out alright but I liked seeing this unique view of one of the year’s biggest games. ~Strider]

Breath of the Wild became a very special game for me over the course of my first 30-40 hours. It wasn’t just the high-quality open world design or delightful quests, but one unexpectedly engaging facet. A facet that was brought on to me via a short strand of these aforementioned quests within the desert wastes.

As you happen upon Gerudo Town, you aren’t exactly welcomed along with a red carpet. Rather, you’re shooed away for at least appearing to be a male. A “voe,” as it were. Given that one of the only notable males in Gerudo history happens to be the biggest baddie in all of Hyrule, suffice to say, Gerudo women are wary of most men. All things and Gerudo Town’s governing body being (presumably) always headed by a “vai” considered, men are hard pressed finding their way in. 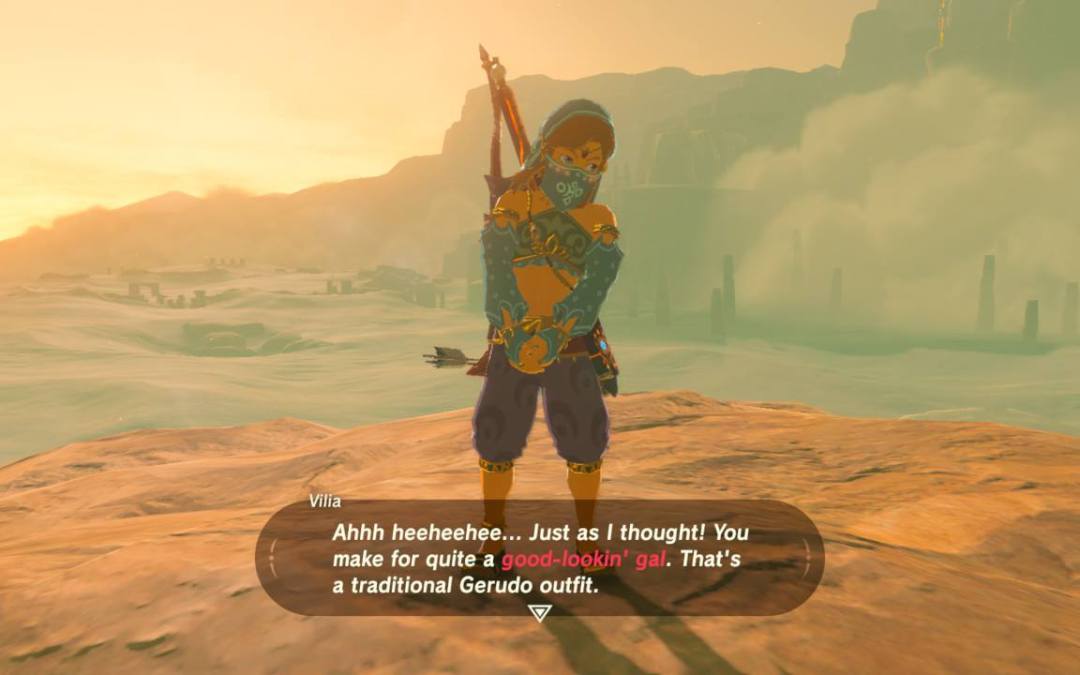 Link is already generally feminine, so fitting into a girl’s outfit was no trouble at all. Without giving too much else away, the ruse was a thorough success and this would be all that would be said from me about this section of the game had I not eventually found it surprisingly comforting headcanons my Link as a genderfluid warrior princess.

Now, this is, technically, nothing new to me. I’ve posed as a lady as Cloud in Final Fantasy VII and I rocked the Yasogami High beauty pageant as Yu in Persona 4. However, neither one of those felt any more than mere spectacles played for laughs and while a couple smaller aspects of Breath of the Wild‘s lady guise were arguably still comic relief, there was definitely more to it as you began to work your way through the innards of Gerudo Town (you can read a very interesting write-up on the subject by ex-staffer Laura K Buzz here). Not only that, the game actually lets you keep the outfit instead of swiping it away from you lest such an “outrageous” getup meshed with Link’s identity.

In fact, should you continue exploring and questing around Gerudo Town, you can rebuy pieces from the outfit to allow yourself to easily experiment with color combinations as well as even purchase jewelry. Within the official canon of Legend of Zelda, Link can not just wear women’s clothing but indulge. 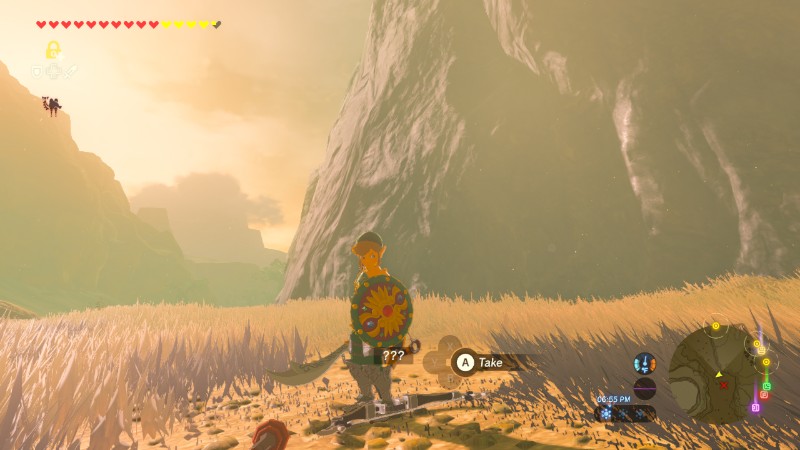 So, naturally, I indulged.

I set out to find the perfect armor pieces for my visage. What I ended up with initially were green soldier greaves, a green woman’s top, and the Cap of the Wind thanks to my persistent usage of my Toon Link amiibo. I then continued to run with this beyond just Link himself. 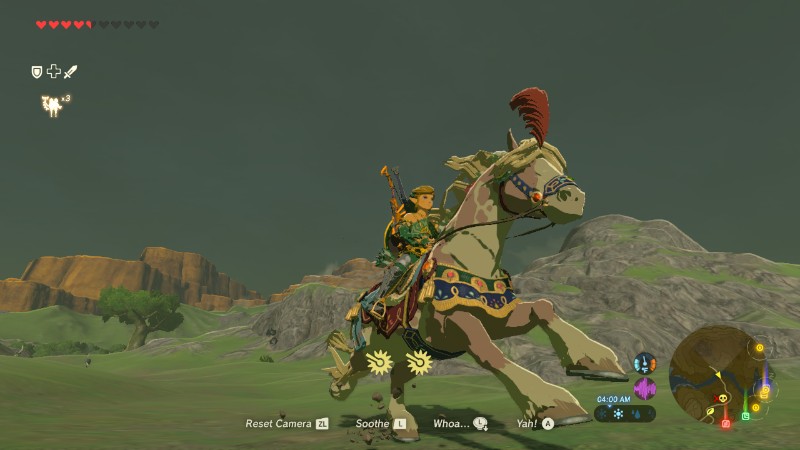 When I discovered a pink horse, I tamed that pink horse quick. When I was then given an opportunity to customize that pink horse more extravagantly, I went with the most beautiful and feminine options I could. Yet, instead of having humored this for as long as I had for a hearty laugh, I was still finding all of it very natural.

It was then that I remembered something that I’ve held to since my childhood: I’ve always had a fondness for femininity. 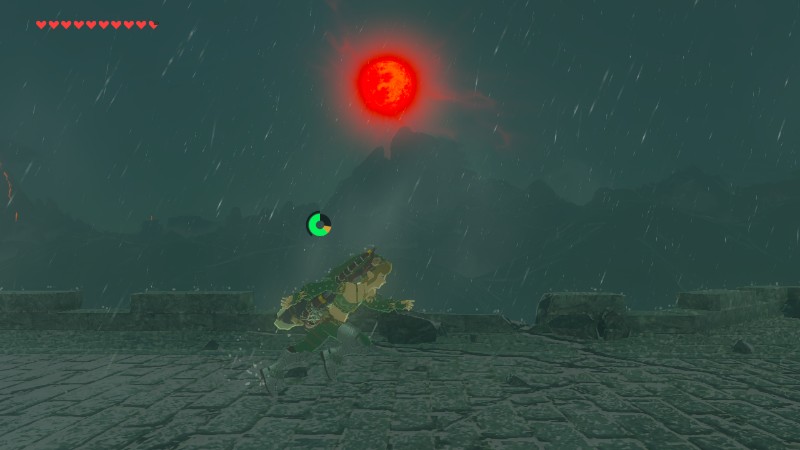 I distinctly recall always being jealous of the kinds of clothes women got to wear with confidence. The unique designs, the vibrant contrasts, the sheer amount of variety in their styles. Yet, here I was with huge piles of graphic tees and some plain old blue jeans.

Routinely, I would attempt to pull my mom towards the girl’s section of Target and question why I couldn’t wear any of it. Of course, the excuse was always about as shallow as you’d expect. “Men don’t wear that stuff,” she always said. No actual reasoning behind it, just a solid, firm “no.” It saddened me every time and, looking back, I likely would’ve been a far happier and more outgoing teenager had I had the moxie to experiment outside gender norms.

These days, I gradually work more flamboyant colors and the occasional piece of jewelry into my ensemble, but I never take it as far as dresses or anything else more flagrantly girlish such as makeup or high heels. I don’t do this just because I’m not particularly attached to those things, but because I also still, at heart, feel comfortable being a male. Or whatever being a male is to me, personally. Fittingly, I’ve most recently been dressing my Link in male Gerudo bottoms along with my new jewelry, some rainbow-tastic color scheming, and the iconic Gerudo top. 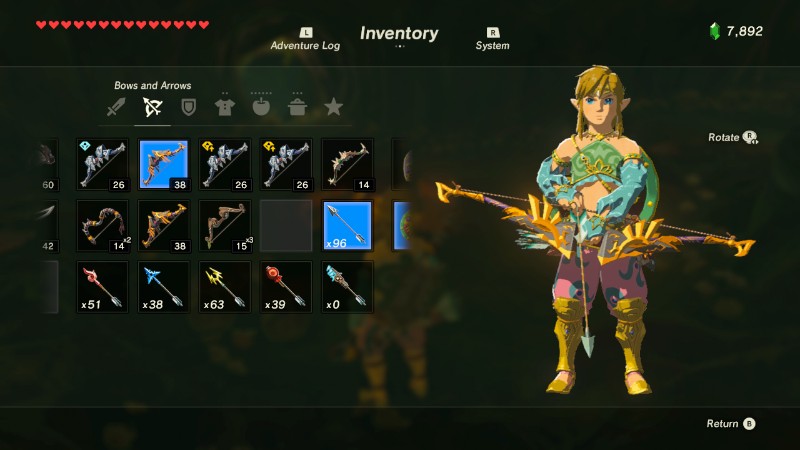 Yet, I often wonder how I’d take to sometimes being referred to as “she” or “her.” 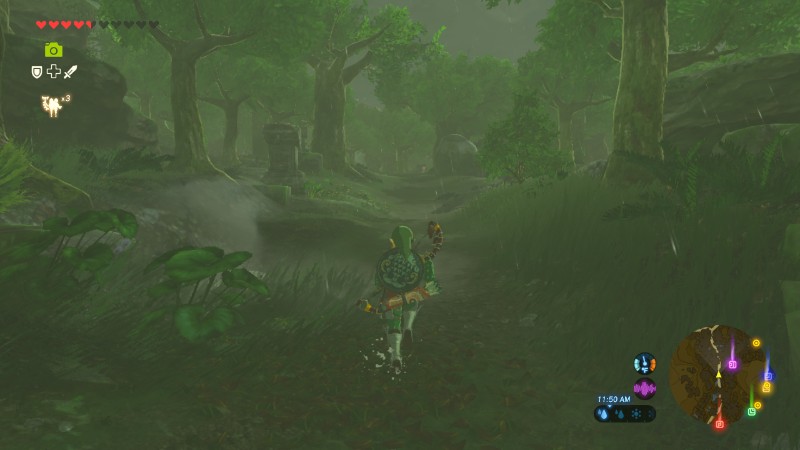 As I’ve garnered more friends along unconventional spectrums of gender, I’ve come across various terminology that has stuck with me. “Demiguy”; someone who feels as if they are both boy and girl, though specifically more boy than girl. “Genderfluid”; someone who slides snugly in between both boy and girl. There’s definitely a connection somewhere outside “male” to be made that I haven’t for sure found and I’m deeply interested in the concept of such a thing being so important to others. Why it’s so important to me.

I can’t deny the allure of my less than absolutely male Link. It’s easy to forget just how integral his design is to the experience of any Zelda game. The player assumes the role of Link and sees in Link what only they see in him. No matter his established gender, personality, or backstory, we all see ourselves in Link when we play. We save Princess Zelda, we restore peace to Hyrule, we fall madly in love with our impish comadre. 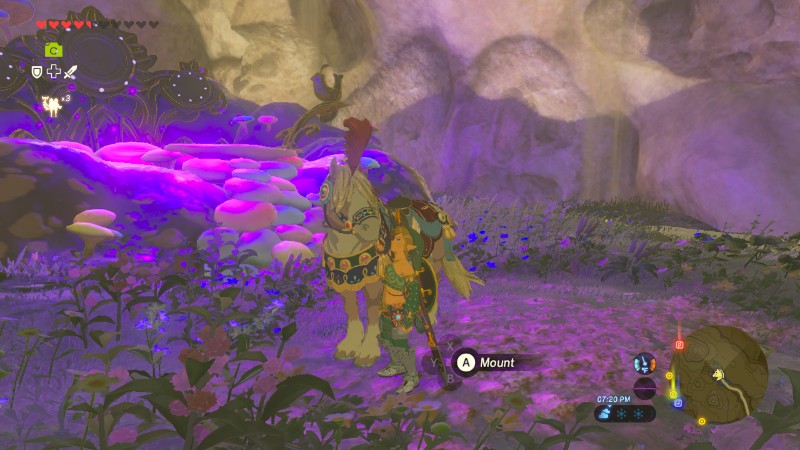 In a strange turn of events, Breath of the Wild has not only provided me with a diverse wealth of quality content to seep through but a chance to rediscover a part of myself that I’ve not often let show. The Link who I’ve traveled as these oh so many hours has changed a lot since awakening atop the Great Plateau and it is much like what I’ve gone through to find happiness within me over some four or five years. I’m now always finding new ways to relate my struggles to this latest Zelda adventure and, assuredly, this is at least a small part of why I’m determined to see it through.

As I pulled the Master Sword from its ancient, rugged pedestal in Korok Forest not three hours ago, the next step in claiming peace back from Calamity Ganon was taken just as the next step of my personal journey to being content with the person that I am has been taken with venting these dormant thoughts onto digital paper.

I will find what it truly means to be “me.” 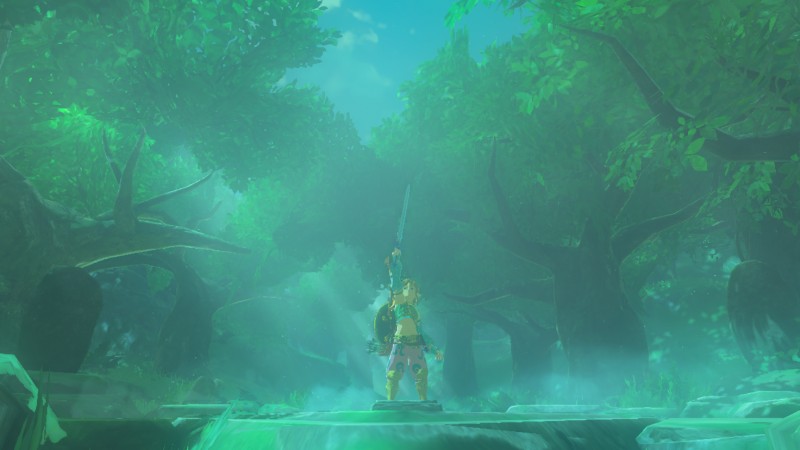