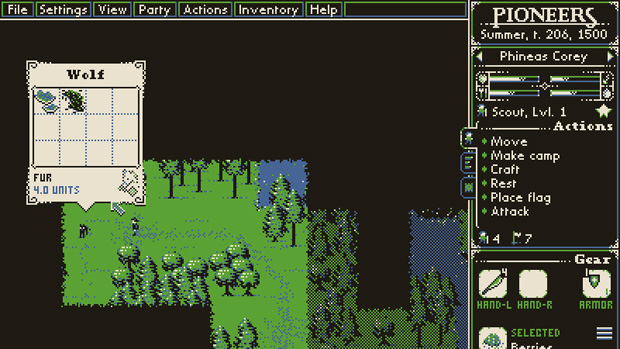 Pioneers was chosen as IndieDB’s “best indie of 2012,” and after spending some time playing it, I can see why. The classic graphics are inspired by old-school Apple or Atari, and while they only use four colors, it still looks great. The gameplay is basically a turn-based role-playing game where you create a party of characters who have stats that determine how good they are at certain skills. The game is also a good mix of Oregon Trail, Pirates!, and Dwarf Fortress.

The goal is to create a party of adventurers to explore and map new lands, meet the natives, get rich from trading, and trying to survive while you complete quests. It’s strongly reminiscent of older games from the Atari and Commodore era, but the gameplay is also very rich with a modern twist. 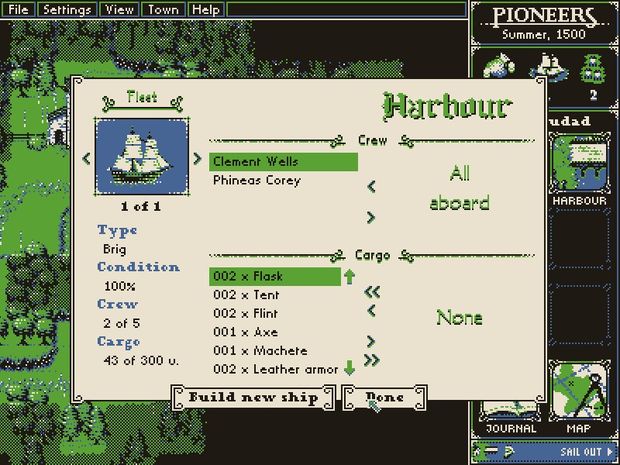 I started off with a quick tutorial showing me how to chop down forests in my way, gather food, and rest in camp. Then I was transported magically to a small town where I built a ship, hired another member for my party, and bought supplies for the journey ahead. Once the ship was fitted, Phineas Corey and Clement Wells (you can’t name crew members) were ready to set sail for adventure. On my way out of town, a merchant approached me with a  quest — if I could round up some spices, he would give me some gold. Sounds good to me, and I didn’t have any other plans.

Sailing is similar to the original Pirates! and wind direction is very important, but to make things easy, there are markers on the edge of the map showing where the head and tail winds are. Clement and Phineas sailed East, got lost, sailed West, got lost, and eventually just sailed around aimlessly for a while. It is difficult to discover land since you can only see a small circle around your ship from the top down. There is an auto-mapping system in place so that you can tell where you have already looked, but it still took me a long time before I was able to find land. 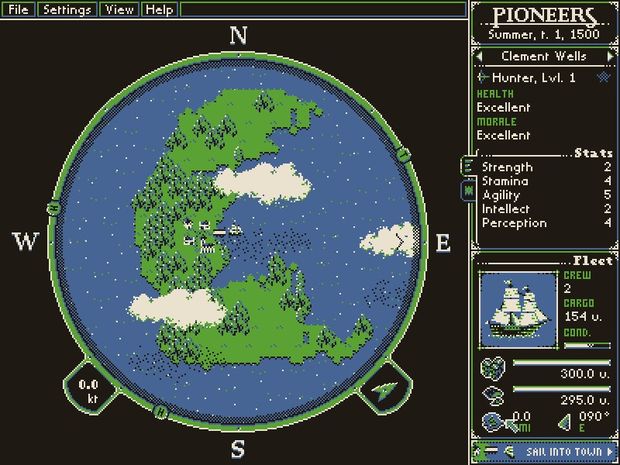 While sailing happens in real time, when the party disembarks, the game becomes turn-based in the style of XCOM. Each party member has a certain amount of movement points they can use each turn, and it’s possible have everyone working separately on a different task. Everyone has their own inventory, health, energy level, thirst, and hunger too so it’s important to make sure they are all carrying the supplies they need and enough food to survive. I learned this the hard way, of course.

Once the party found land, they were almost out of food, so I sent the boys off in search of something to eat. Phineas found some berries while Clement was busy chopping down some trees and loading wood onto the ship. They had to have something to show for this trip, after all. I sent Phineas further inland to see what he could find, and he found a wolf which proved to be a better fighter since Phineas didn’t have any weapons on him. I decided to have Clement return home alone to try and get together a better-equipped party. 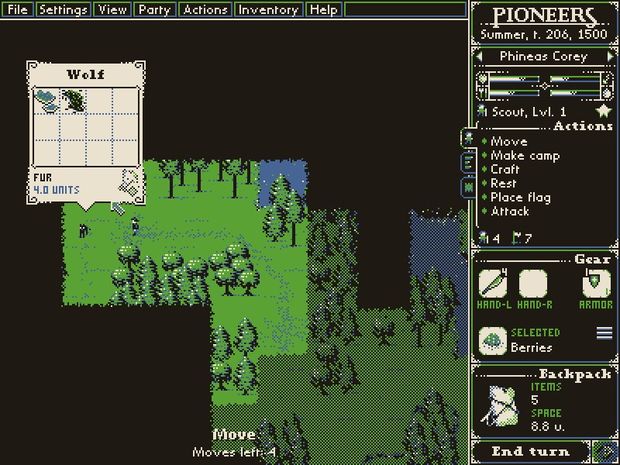 I hired a scout and a scholar to bring along, as well as much more food than I brought last time. My party wandered around for a bit exploring and gathering some berries, but I couldn’t find any spice around. I started having each party member chop down forests to make a path towards the center of this island that I had discovered, and that’s when I realized that I had been playing this game for over four hours. I guess it’s fun.

While Pioneers is available to download and play right now, it is still an early alpha build. There is a lot more planned for this game, and if what’s added is anything like what’s already implemented, I am very excited. It’s up in the concept section of Steam Greenlight, so go give them an upvote if this sounds like something you like, and you can also keep up to date with their progress on IndieDB.