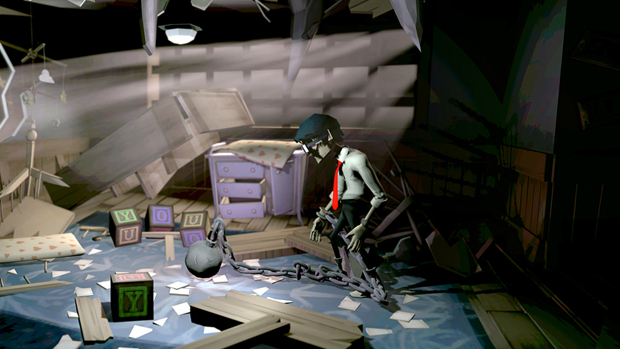 Tokyo Game Show held its annual Sense of Wonder Night, an awards show for unique sorts of games, typically indie. Ten games were up for the prestige of being the most wonderful (in the less casual sense of the word).

We were only able to pop in for the last three. First was Chained, a moody puzzle game from three students that involves lugging around a ball and chain. Despite the usual “horrible nagging wife” cliche the phrase evokes, it’s meant to be all metaphorical for any negative attachment people drag around, which is why the team designed a lead character that “just about everyone can relate to” (well, men, anyways).

Then there was Expand, a minimalistic puzzle game about moving a pink square through a changing black and white labyrinth.

Last — and likely hardest for the translator to deal with — was four dimensional puzzle game Miegakure, which has been in development for a number of years still. Probably because it’s rather confusing. Developer Marc ten Bosch basically gave the same explanation as the above video, plus showed off one more puzzle that involved linking two solid square blocks. I kind of get it.

To encourage the participants showing off their games, including the ones we missed, attendees were give this squeaky gavel. At any moment, one or two shakes could give way to a round of high pitched waka waka waka from the crowd. I’d like to reserve my waka waka waka for the translator who translated ten Bosch’s heady puzzler.