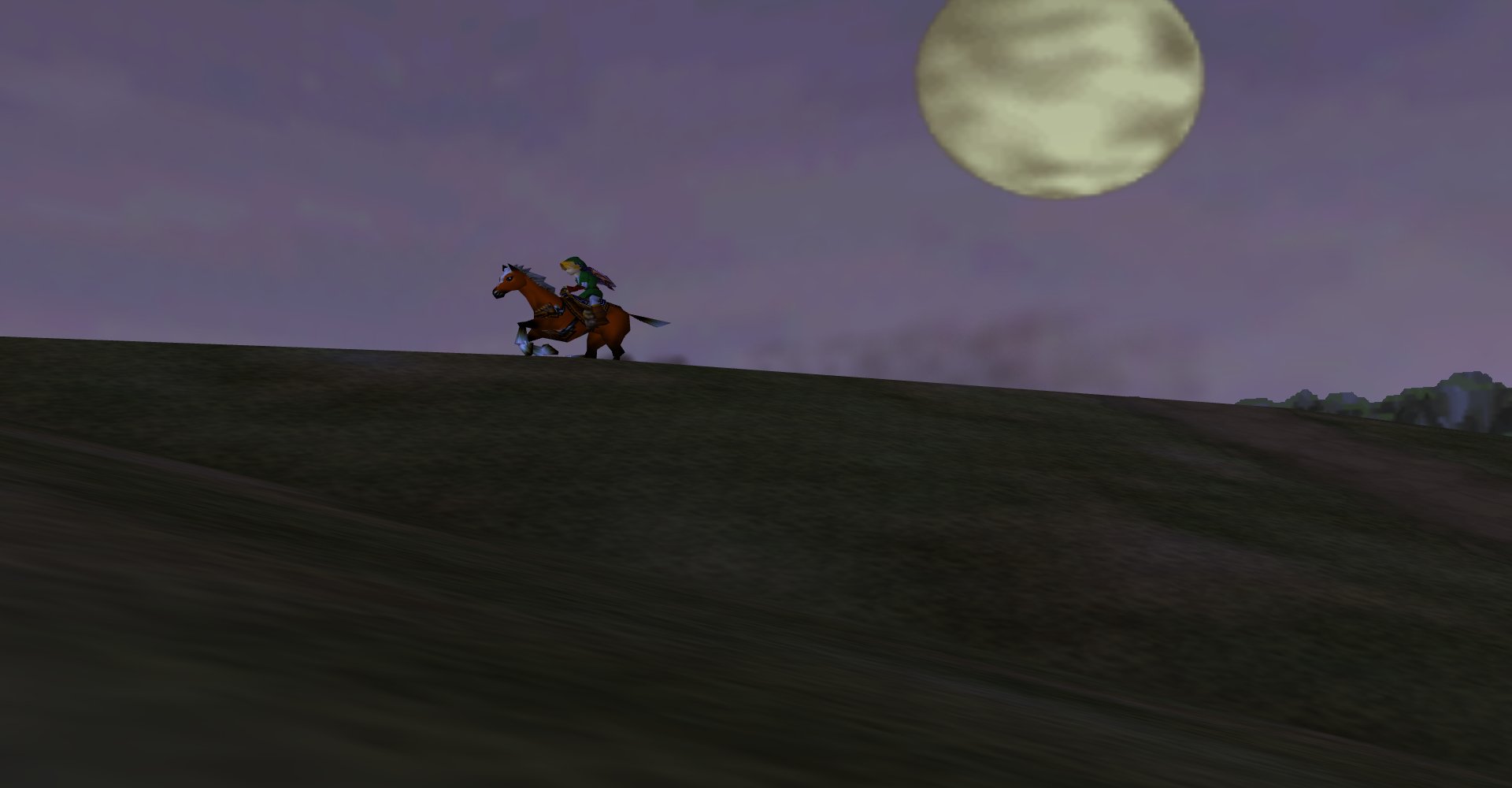 I’ve been waiting for you, Hero of Time

This entry is all about The Legend of Zelda: Ocarina of Time. Feel free to share some of your own favorite things about the game in the comments! 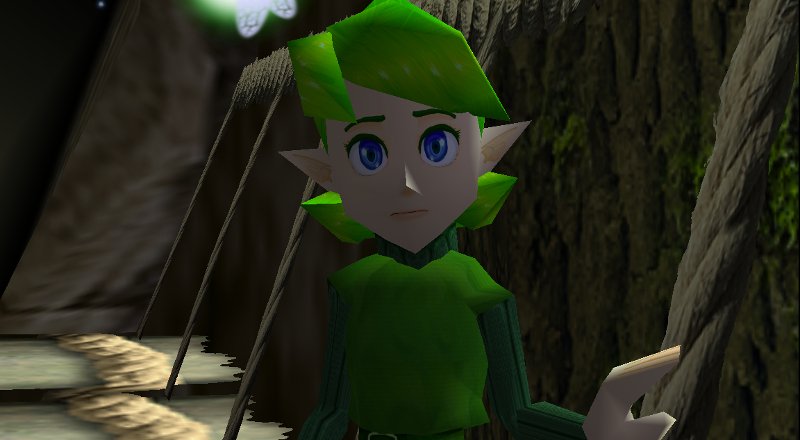 Link may have been on a quest to rescue Zelda, and he may have accidentally gotten engaged to Ruto, but the girl I always liked the most was Saria. The pair would never work out romantically, since as a Kokiri, Saria would always be a child. But I was still rooting for her anyway.

Saria is Link’s childhood friend. She’s the second best green-haired gal in video games (Final Fantasy IV‘s Rydia probably has her beat), she has a really happy theme song, and she’s one of the friendliest characters Link interacts with. When his journey begins, she meets him on his way out of Kokiri Forest, expressing sadness that he’s leaving even though she always knew it would happen someday. She gives Link her ocarina as a memento of their friendship and tells him, “When you play my ocarina, I hope you will think of me and come back to the forest to visit.”

It’s a very sweet moment, which Link totally ruins by being awkwardly silent, backing away slowly from her, and then suddenly running off without a smile, a wave, or even a glance back. Later on, he even tosses aside her ocarina without a second thought after he acquires the Ocarina of Time from Zelda. Way to be a terrible friend, Link.

The two childhood pals meet up once more seven years later in the Chamber of Sages, when Saria awakens as the Sage of the Forest Temple. She laments that she cannot live in the same world as Link, but accepts that it is her destiny. Their final meeting ends with the words “Saria will always be… your friend…” That line always makes me feel more sad than happy for her. Poor Saria… I always wished I could go visit her again, even though Link probably couldn’t care less. 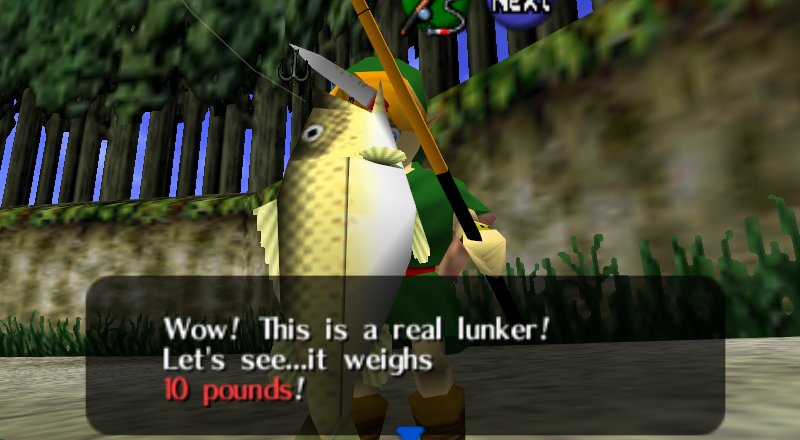 What’s a hero to do when the princess has been kidnapped and evil monsters roam the land? Go fishing, of course! It may not have helped save the world, but I sure spent an ungodly amount of time at the fishing hole near Lake Hylia trying to catch the biggest fish possible.

As far as fishing mini-games go, Ocarina of Time‘s is one of the best. The controls are easy to learn, there are a couple rewards for landing “a real lunker,” and there are a bunch secrets to be discovered by those like me who were crazy enough to spend a lot of time there.

For starters, there was the sinking lure. It’s a hidden item that can be found in a few spots around the pond just by walking over it. It lets Link catch fish that are sitting at the bottom of the pond, which usually tend to be the biggest. The pond owner doesn’t appreciate outside lures being used, however.

There’s also the pond owner’s hat trick. If Link stands in the perfect spot and casts the lure directly at the owner, he can actually catch his hat! This reveals a bald spot that has developed in the seven years since Link last saw the man, but obviously he gets rather upset about having his hat stolen. Link can either give the hat back or choose to be a huge dick and throw it in the pond. What the hell, Link?

Finally, there’s the Hylian Loach. For the longest time, I thought catching this rare fish was just a made-up rumor. It appears in the pond occasionally, resting at the very bottom, but there never seemed to be any way to actually attract its attention. It is possible though, and I’ve even managed to catch it myself once before! The trick is to wait for it to come up to the surface, and in that brief moment, it might just grab onto the lure. The 30-pound fish is extremely difficult to reel in, and after Link goes through all the trouble of catching it, the pond owner (though impressed) makes him release it back into the water. The Hylian Loach is an endangered species, after all. No wonder it’s so hard to find!

Music from the valley

Every song off of Koji Kondo’s iconic soundtrack is just as memorable as the last, but I feel there has always been one clear standout track that rises above the rest: the Gerudo Valley theme.

The very first time I set foot in Gerudo Valley, riding atop Epona, I immediately fell in love with this song as soon as I heard the first few notes. The Spanish guitar-inspired tune definitely sticks out from the rest of the soundtrack with its energy and unique instruments. I found myself hanging around the canyon area for a long time just listening to the music loop over and over again.

Out of all of the wonderful music to come from the Legend of Zelda series, this song might just be my favorite. I had the pleasure of seeing a live performance of the Symphony of the Goddesses orchestra once, and of course they played the Gerudo Valley theme. It was every bit as amazing as I thought it would be! 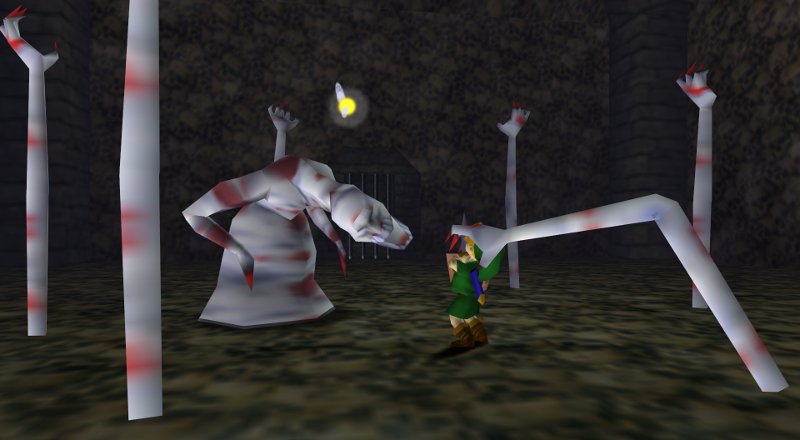 Dawn of the Dead Hand

On the surface, Ocarina of Time may seem like a lighthearted adventure suitable for all ages. But deep down, it’s filled with all manner of truly horrific monsters that could make anyone’s skin crawl.

Take the ReDeads, for instance. These soulless husks lazily walk around like zombies, moaning and drooping and generally being creepy. If Link walks too close, they let out a terrible shriek, freezing him in place as they slowly walk up and attempt to cling onto him and suck away his life force in a horrifying bear hug of death. I always made sure to keep as much distance from them as possible just to avoid those awful sounds they make.

Then there’s the cursed family in Kakariko Village. These unfortunate souls were transformed into grotesque half-man, half-spider hybrids with deformed faces, random human arms mixed with spider arms, and the disturbing ability to quickly descend from the ceiling. They may be friendly, but good god, they are way too upsetting to look at. The least they could do is stay at ground level so they don’t surprise the crap out of me whenever they suddenly decide to drop down in front of my face.

But the most horrific monster of all would have to be the Shadow Temple’s Dead Hand. This terrifying pile of bloody flesh has an infinite amount of hands that stick out of the ground and grab onto Link, trapping him in place as the main body slowly lurches forward with its weird, handless arms, empty eye sockets, and gaping jaw. Everything about this mini-boss creeps me the hell out, from its grisly appearance down to the way it awkwardly wiggles around and unhinges its jaw to eat Link. And then it keeps twitching even after it’s been killed (*shiver*). Dead Hand might be the most potent nightmare fuel I’ve ever encountered. I thought this was supposed to be a game for kids, Nintendo! 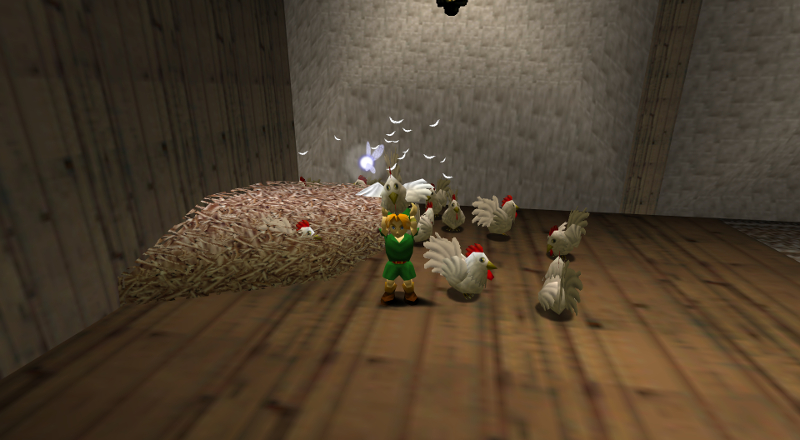 Cuccos may seem like docile creatures at first. They’re just chickens, after all. Weak little birds that squawk and flee when attacked. But should Link choose to bully them too much, he might just regret his cruel tendencies.

When threatened, a lone cucco will make a shrill cry, calling forth its fellow cuccos to descend in a swarm upon Link, tackling him to ground and wreaking havoc in a flurry of feathers and loud clucking. It’s a hilarious sight to behold, and probably a rather terrifying experience for Link. But he did have it coming to him, really. I mean, who picks on a poor, defenseless cucco?

Of course, Ocarina of Time wasn’t the first game to introduce the dreaded cucco attack. That honor belongs to A Link to the Past. But the event is so much more dramatic and humorous in Ocarina of Time, with its initial cutscene and the sight of all these birds flying in from every direction and literally knocking Link over as he yells out in pain. I’m glad they kept this little joke in just about every other game to feature cuccos as well. They even made it into the newest Super Smash Bros. as an item. I always make it my top priority to activate the cucco attack at every opportunity! 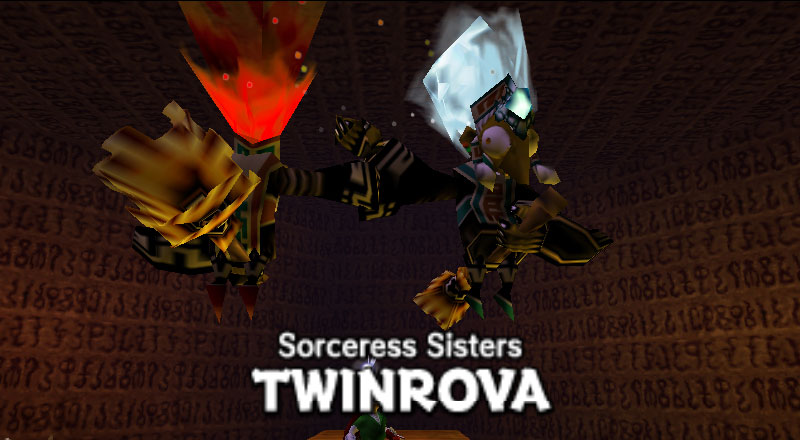 The boss of the Spirit Temple, Twinrova, is noteworthy for a few reasons. She’s the only boss that Link gets a glimpse of before entering the temple, when he spies her kidnapping Nabooru. She’s the only boss that undergoes a transformation mid-fight. She’s also the only boss, besides Ganondorf, who speaks to Link. Oh yeah, and she’s actually two separate characters, the twin witch sisters Koume and Kotake. They may be villainous kidnappers, but I still think they’re awesome.

The actual fight itself is really interesting, and rather difficult. During the first phase, the two witches attack separately, one casting fire magic and the other ice. Link must use his newly acquired Mirror Shield to deflect one witch’s attack over to her sister, which requires some tricky targeting tactics.

After enough hits, the sisters fuse together into Twinrova, with the powers of both fire and ice together. For this phase, Link has to charge up the Mirror Shield by absorbing three of the same type of magic attack in a row, which then releases in a burst of pent up energy back at Twinrova. Then Link just has to run up and slash away while she’s staggered.

Once she’s defeated, the sisters separate again as halos suddenly appear above their heads. They begin lamenting their death at such a young age (“I’m only 400 years old!” “And I’m just 380 years old!”) then start bickering with each other for lying about their ages (they’re twins, after all) and accusing each other of going senile. As they ascend to the afterlife, they leave Link with a final threat: “I’ll come back to haunt you!”

It’s an unexpectedly humorous moment, and it easily made Koume and Kotake jump up to the top of my list of favorite Legend of Zelda bosses. It’s awesome that despite being villains, they still get to go to heaven. It’s a nice little positive outlook on life from Nintendo. It’s also awesome that Koume and Kotake later appeared as returning characters in Majora’s Mask, but they were good guys who ran a potion shop and helped Link on his quest. Maybe they’re not so bad after all!