So, you’ve decided to move out?

This entry is all about Animal Crossing. Feel free to share some of your own favorite things about the game in the comments! 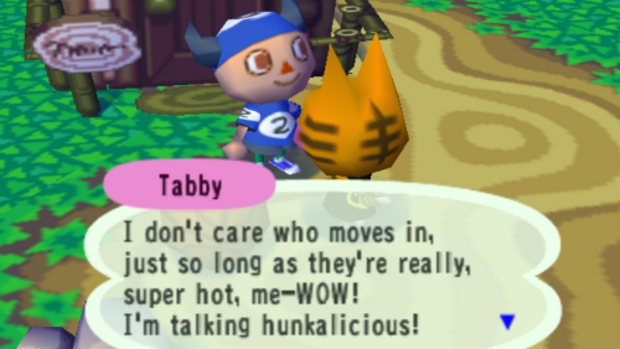 The mouse next door

Animal Crossing is all about the villagers. Whenever I start a new town, I pray I’ll get at least a couple cool neighbors. I usually try to pester or ignore the less desirable ones until they eventually move out to be replaced by someone better. And when an awesome neighbor finally moves in near me, I make a point of hanging out with them every day, hoping they’ll be my best friend.

There are a ton of animal villagers I really like, but I think my favorite will always be my first friendly villager, Samson the mouse. Samson lived in the acre right below me in my very first town. He has the sporty personality, so he’s constantly talking about lifting weights and keeping active, with a very optimistic and happy attitude. I used to visit his fruit-themed house every evening before bed, listening to him brag about how many push-ups he could do and asking if there were any errands I could run for him. I was always glad to see him walking around town.

Then I tried visiting my friend’s town one day, and a while later I noticed that Samson had moved. He’d left to go live in my friend’s town, and I was super bummed. It always seems to happen to the villagers I like the most, while the ones I don’t particularly care for seem to stick around forever.

Luckily, I’ve had plenty of other cool neighbors to keep me company ever since Samson left, like Punchy, Apollo, Puck, Leopold, Lobo, and Octavian. I never managed to get Bob in any of my towns, though. Bob is the best. 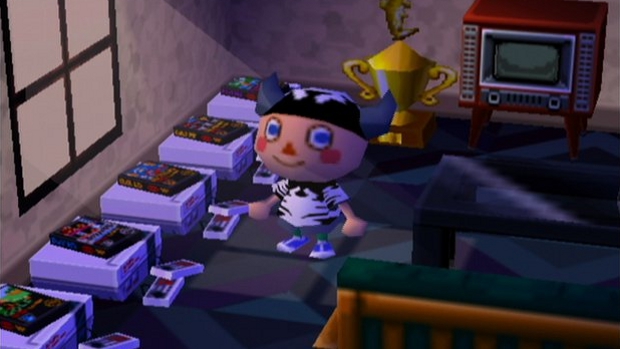 A blast from the past

The GameCube version of Animal Crossing was the only one to get NES games as items (at least in the US), which is a shame because it was one of my favorite things about the original game. The NES titles are furniture items which can be placed in players’ houses. Interacting with them while they’re on display will allow the game to be played. And not just a demo of the game. The entire thing was playable!

NES games were particularly hard to come by, usually only found in Tom Nook’s lottery at the end of the month, or in Crazy Redd’s black market tent. There are 19 in total that can be obtained, although some of them can only be found through cheat codes. I only owned a few of these games growing up (Excitebike, Super Mario Bros., Punch-Out!!, and Legend of Zelda), so the rest of them were completely new to me.

I spent a ton of time playing all of the NES games, which I collected and displayed in my basement. I probably spent the most time playing Balloon Fight, Clu Clu Land, and Ice Climber, since those titles were very unfamiliar to me, and also Pinball, which was strangely addictive. It was crazy that they included so many, though. Animal Crossing was essentially twenty different games in one package. It just took a bit of work to find them all. 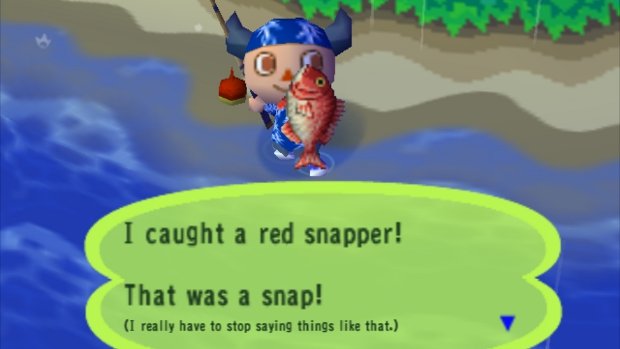 If you know me at all, you know that I love the ocean and everything in it. So it should come as no surprise that my favorite activity in Animal Crossing is fishing, of course!

Fishing in Animal Crossing is pretty simple, compared to most fishing in videogames. The player only needs to line the lure up with the fish’s face, wait for it to bite, then hit A and voila! The fish is caught! No need to worry about reeling anything in or having the line break. It’s all about careful aim and a bit of patience. It’s also probably the quickest way to make money, so I often found myself fishing out of necessity to pay off my debts, but still had fun doing it.

I love how specific the game gets with the various types of fish, too. All of the fish featured in Animal Crossing can be found in the real world. There’s normal fish that everyone has heard of, like goldfish, piranha, and catfish, and also some really exotic ones that only ichthyologists would know about, including arowana, arapaima, and coelacanth. I actually learned a lot about real-life fish and bugs just from playing Animal Crossing!

Oh, and the player character likes to come up with the most awful puns for everything they catch. So there’s always that to look forward to while waiting for a fish to bite! 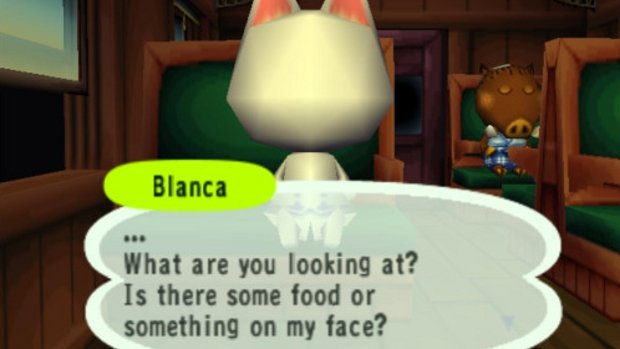 The cat without a face

There are tons of animal characters to encounter, aside from just the villagers living in town. Special characters will occasionally stop by for a visit, depending on the time, the date, or other circumstances. There’s a giraffe fashionista, a wandering walrus, a carpet-dealing camel, an accident-prone seagull, and more.

One such character is Blanca, who will sometimes appear on the train when a player goes to visit another town. Blanca is a white cat with a blank expression, and I mean that in the most literal sense. She does not have a face. It’s actually kind of horrific when you think about it. I mean, how is she even talking to me? How does she eat? How does she breathe?!

After a rather unsettling conversation (apparently she washed her face off?), she asks the player to draw her a new face. A menu pops up, similar to the menu for designing clothing at the Able Sisters’ shop, allowing the player to draw whatever they want on Blanca’s head. Players can make her look as beautiful or as scary as possible. And I’m sure there are plenty of people who drew immature things for a laugh, like drawing on a roommate’s face with a marker after they’ve passed out.

Later, she can be found walking around town with her freshly designed face. Even though I usually tried to give her normal features, they often still looked rather strange and stretched out. Poor Blanca! Her appearance is forever at the mercy of others, and other people can be pretty cruel. At least she provides a fun little mini-game, and the results are almost always amusing. 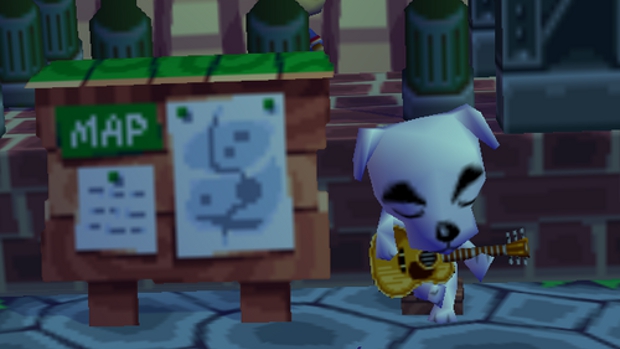 Everybody loves K.K. Slider, right? He’s the hip hound that stops by the train station on Saturday nights to play live music. He basically makes Saturday the most exciting day of the week. I always made it a point to play the game every weekend around 8pm to see him.

K.K. will play just about any style of music imaginable, from rock ‘n’ roll, to country, to reggae. He’ll take specific requests, or just play whatever, and after a concert he’ll give the player an air check so they can listen to his music at home. Obviously, I had to collect them all.

There’s a ton of K.K. songs that I enjoy, but the songs I had playing most often on the stereo were K.K. Cruisin’, Go K.K. Rider!, and K.K. Ballad. Of course, I’m sure everyone else has their own favorites. You really can’t go wrong with a K.K. song. Well, except for maybe K.K. Dirge… that music makes my skin crawl.

Between K.K. Slider’s tunes and the ambient music that changes depending on the time of day, Animal Crossing has one of the most unique applications of a soundtrack I’ve seen. Certain songs will always scream “Animal Crossing!” to me more than others, just because of how and when I played. For me, it’s all about the 8pm music and K.K. Cruisin’, but other players could have an entirely different opinion. 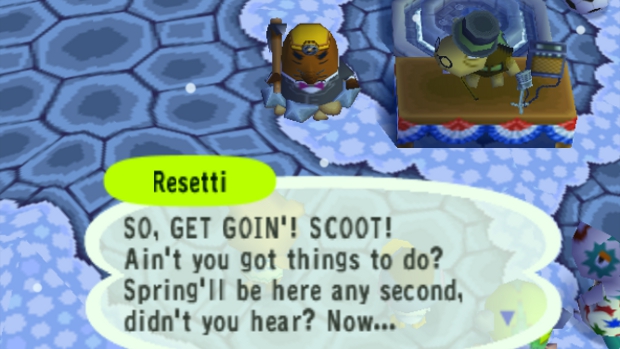 Animal Crossing handles time mechanics in a rather remarkable way. Not only is there a day and night cycle, but even the seasons change in real time. Different seasons bring different weather, different events, and different animals into the game. Playing during winter almost feels like an entirely new experience after playing during the autumn months for so long.

And as if that wasn’t enough, Animal Crossing even has several in-game holidays which correspond with actual holidays in the real world. That means if the player starts their game on October 31, for example, the villagers will be celebrating Halloween, running around dressed as Jack-o’-Lanterns, asking for candy, and handing out prizes.

The holiday events were always entertaining. The fireworks displays on New Year’s Eve and July 4 are really pretty and fun to watch from the pond. During the Harvest Festival, players have to save a frightened turkey from becoming a feast. A reindeer comes to visit on Toy Day, handing out toys to the player when he’s found. On Groundhog Day, the resident mole — I mean, “groundhog” — makes an appearance to predict the upcoming weather. They even celebrate the player’s birthday, which the other villagers will sometimes ask about in order to get the date right.

All of these time-sensitive events are a great way to keep players thinking about the game even after they’ve stopped playing for a while. Once Christmas season began, I found myself wondering what kinds of events might be happening in the world of Animal Crossing, and planning a time when I could jump into the game and explore. And when spring rolled around, I felt compelled to visit the game again just to find all of the new fish and insects the warmer weather attracted, and to see if anything changed around town. I had Animal Crossing on the mind all year round! 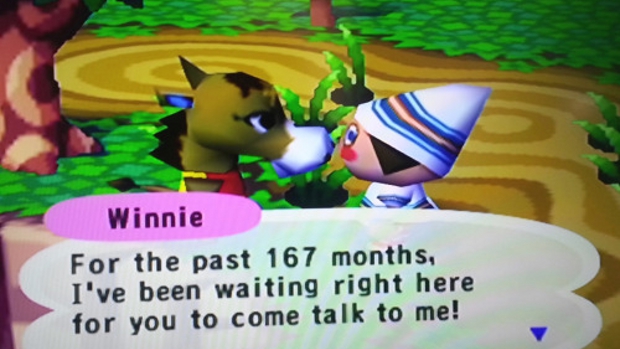 Waiting ’til the end of time

Time doesn’t stand still in the world of Animal Crossing, even when it’s no longer being played. If a player boots up the game after a year-long hiatus, they’ll notice that the town has changed a lot since they last played. It will become overrun with weeds, houses will become infested with cockroaches, mailboxes will be overflowing. It’s a huge mess to deal to with.

And yet, the villagers that still haven’t moved away have not forgotten about their human friend. In fact, they’ve been counting the months since they last spoke with the player. Even if it’s been several years, they still count the months. Every single month, waiting, hoping, feeling sad and abandoned, refusing to pull their weight and CLEAN UP THE DANG TOWN THAT THEY LIVE IN, LIKE I’M THE ONLY ONE– ahem. Got a bit carried away there. I apologize.

I always thought it was really crazy that the game carries on without me even when I’m not playing. It makes me wonder what’s going on in all the different towns I’ve created over the years, hiding away in various memory cards. Are my favorite villagers still there waiting for me? Or have they moved on to a new home after feeling neglected? Maybe I’ll pop into the game again someday and find out.