This entry is all about Metal Slug 3. Feel free to share some of your own favorite things about the game in the comments! 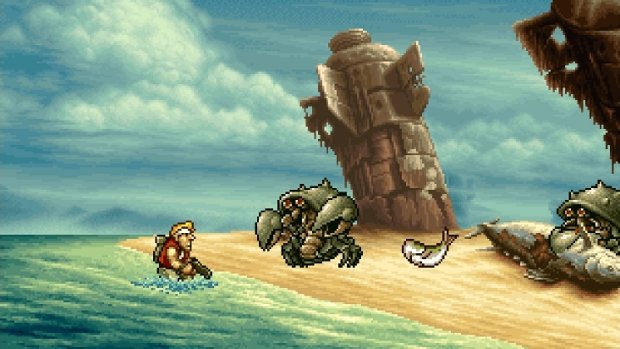 Right from the very beginning of Metal Slug 3, I could tell it was going to be a wild ride. The opening mission drops the player off on a sunny beach, which at first seems almost peaceful and comforting, until the rotting fish carcasses and crash-landed rockets littering the dunes come into view. Suddenly, a bunch of huge, mutated crabs swarm the beach and start attacking in hordes. Giant crab monsters for the very first enemy? Talk about starting off on a high note!

The level then splits off into two different paths. One path leads to a mangrove area crawling with oversized locusts, and a boat that takes the player across a swamp infested with flying piranhas.

The alternate path leads underwater, as the player takes a submarine and dives into a deep ocean crevasse. The waters here are teeming with electric jellyfish and are also home to four utterly enormous moray eels. These things appear to be 20-30 times larger than the submarine. They cannot be killed, but they can crush the player against the side of the wall in an instant. The eels also come out of caves which indicate that their names are Helen, Linda, Jenny, and Barbie. Quite adorable names for these hulking, majestic creatures.

The eel crevasse has to be my favorite area in the entire game, and it’s just the first level! And of course, once the player passes through the underwater cavern, they’re met with the boss of mission one: a particularly intimidating crustacean by the name of… 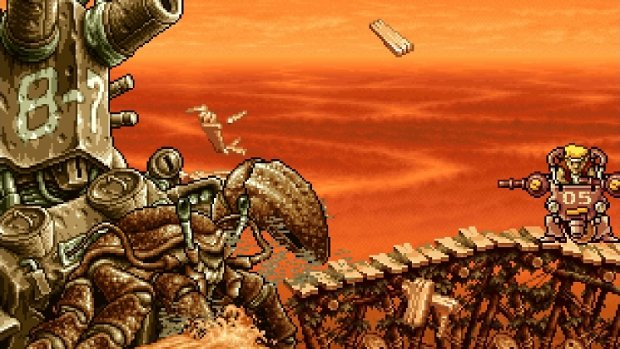 The boss of the opening mission is a gigantic hermit crab which makes its home inside of a military tank rather than a seashell. As the player runs along a boardwalk firing backwards at the massive crab, the Huge Hermit advances, easily destroying the boardwalk with its large claws as it moves. It also uses the tank on its back to fire projectiles from the cannons, keeping the player on their toes while they run. It’s such an amazing adversary!

The Huge Hermit is probably one of my favorite videogame bosses of all time, largely from a design perspective. Giant crabs are already awesome by themselves, but a giant crab with a huge tank on its back which it uses to shoot nukes and fireballs? You can’t get much better than that! Plus, the animation team did a truly fantastic job bringing the sprites to life on this thing. Like pretty much everything else in the game, the hermit crab’s movements are so fluid and natural, while the tank shifts around in a more mechanical way. It’s almost mesmerizing to watch.

And keep in mind, this is still only the first mission in Metal Slug 3. It’s such an incredible introduction to all the craziness that the game has to offer! 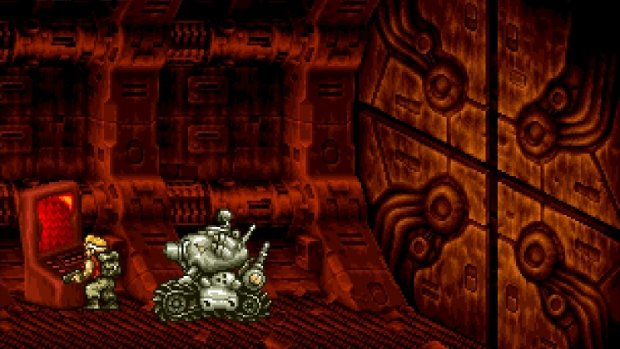 A Slug for every occasion

Metal Slug‘s namesake, the Slugs, really help to set the game apart from other run-and-gun titles. The Slugs are mechanized vehicles which come in a variety of shapes and sizes, with all kinds of cool weapons and abilities.

Metal Slug 3 has about ten different types of Slugs to find and play around with. There’s a mecha Slug which walks around with dual arm guns and a crotch cannon, a helicopter Slug for increased air mobility, a submarine Slug for easier underwater movement, a rocket Slug for space travel, a drill Slug which is particularly effective against giant snails, and more.

But my personal favorite is still the classic SV-001 “Metal Slug” which has appeared in just about every game in the series. It’s essentially just a tank, but it’s one of the most well-designed tanks around. I love the iconic design, with a roundish body and long, spiky treads. Plus, it’s built in a way that allows it to actually jump and crouch, making it not only powerful and protective, but agile as well. What other tank can do that?

In a game where one hit means instant death, riding around in a Slug feels extremely satisfying. The Slugs can take a few hits before they overheat, forcing the player to eject before they explode, so climbing into one is always a breath of fresh air. Of course, I usually lose my Slugs pretty quickly anyway, but they’re still great for those brief moments of feeling all-powerful among the hordes of puny enemy forces. 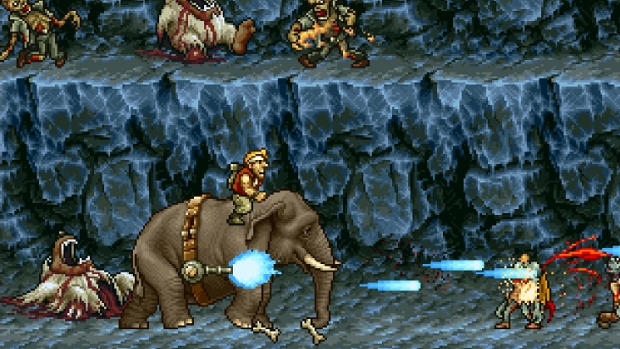 Metal Slug 3 offers a wide variety of helpful friends and modes of transportation, most notably from the animal kingdom. There’s a bunch of animals to ride around on, like a camel, an elephant, and an ostrich, as well a cute little gun-toting monkey that can follow the player around.

The monkey is especially adorable. It can be found during two different missions, wearing a diaper that it stores bananas in and carrying a gun that it’s not afraid to use. I always find that it leaves me too quickly though. Come back, little monkey! Don’t leave me while I’m being completely surrounded by zombies!

The three vehicular animals actually count as Slugs. They all come equipped with weaponry strapped to their sides and they can’t be destroyed. It’s so much fun to ride around on camels and ostriches while mowing enemies down with mounted guns. You think you can take me down with your armored tank and helicopters? Too bad they’re not fast enough to deal with my awesome weaponized ostrich buddy! Muahaha!

The elephant is probably the coolest of the three, if only because of its unique grenade options. If the elephant picks up a crate of hot chilis, it will be able to shoot a huge ball of fire out of its trunk. Alternatively, it can pick up a car battery in order to shoot bolts of lightning. I mean, come on: a fire-breathing, electrified elephant with guns strapped to its sides? How do you top that? 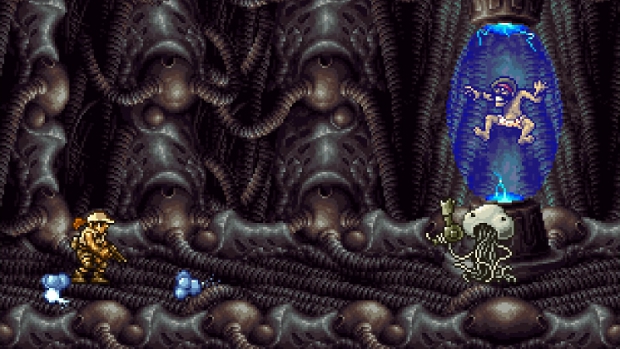 There’s just something about the Martians in the Metal Slug series that I find particularly compelling. It probably has a lot to do with their appearance. They’ve got huge, bulbous heads and a tangle of crazy, spaghetti-like appendages wiggling about all over the place. It’s actually a pretty typical alien design, but somehow it really works. The animations for the tentacles are just gorgeous, and totally mesmerizing. I could watch the Martians’ idle animation all day.

These guys don’t make an appearance in Metal Slug 3 until the final mission, where they retreat into outer space with hostages and use their advanced technology to slow the main characters down. The Martians play a role in many other Metal Slug titles as well, and I always get a kick out of the encounters. Even though they’re usually the enemy, and cause a great deal of annoyance for the main characters, they’re just such a joy to watch. I almost feel bad killing them. Almost. 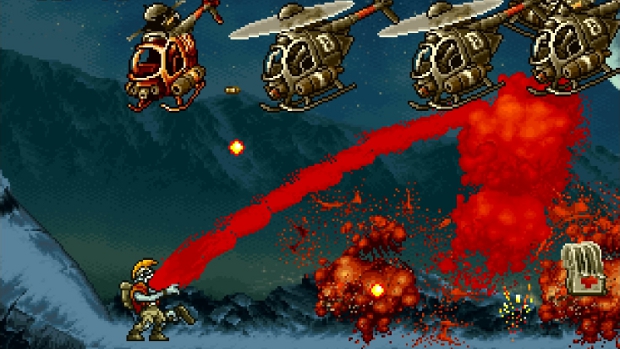 With all the crazy, diverse enemies in Metal Slug 3, the main characters are bound to be killed in some pretty messed-up ways. Aside from being shot, burned, zapped, and crushed, they can also be stripped to the bone by piranhas, dissolved by acid, hit with spores that cause them to burst into a tangle of vines, and more.

Certain enemies and objects can also cause the main characters to transform, often leaving them more susceptible to death. Bats and mummies can mummify the player, restricting their movement and weapons. Yetis can turn the player into a snowman, trapping them and leaving them open to attack until they can wiggle free. Collecting too many food items can cause the player to become obese, slowing movement but increasing firepower.

But the best transformation by far is the zombie form. Being attacked by a zombie will cause the player to become a zombie as well. Like some of the other transformations, movement is restricted and only the default pistol can be used. However, the grenade becomes an extremely deadly, projectile blood-vomit attack, which blasts out in a huge arc from the bottom of the screen all the way to the top. It’s possibly the most powerful attack in the game. It can even easily decimate the bullet-sponge of a boss if the player is skilled enough to avoid attacks with the sluggish zombie movement. Destroying helicopters and enemy hordes by barfing up a huge bloody mess never gets old!