I am a shadow… the true self

This entry is all about Persona 4. Feel free to share some of your own favorite things about the game in the comments! 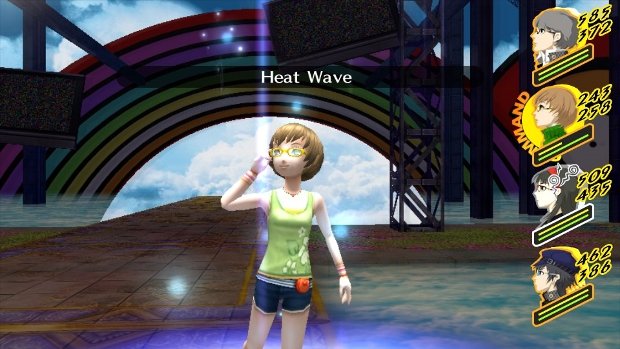 The best thing about Persona 4 is its huge cast of interesting, colorful characters. There aren’t really any characters I particularly dislike, aside from the ones you’re supposed to hate (Morooka and Kashiwagi, for instance). Everyone has their own favorite Persona 4 character, but I’ve always been particularly fond of Chie Satonaka.

Chie is one of the protagonist’s classmates, and one of the first people he meets at his new school. She’s very energetic, friendly, and upbeat. She loves watching kung fu movies and eating all kinds of meat (especially steak!), and she can kick foes into oblivion with her signature Galactic Punt move. Like, she can actually send giant robots and tanks flying into outer space with just her foot. She’s amazing!

She’s also one of the characters the protagonist can date. Chie is so charming that I always end up dating her every time I play Persona 4, rather than seeing how any of the other girls would react. The way she says, “I love you,” at the end of her social link just makes my heart melt. You’re the best, Chie! 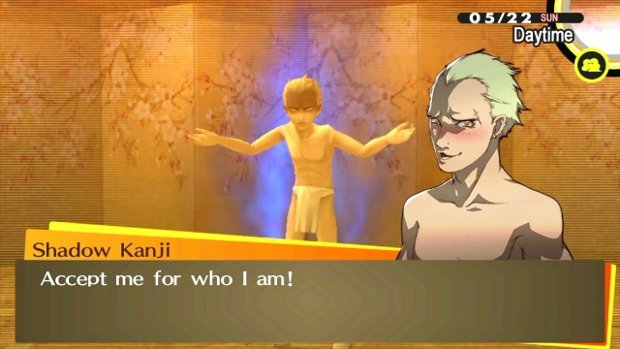 Arguably the craziest shadow is that of Kanji Tatsumi. Kanji is the tough guy of the group; he shouts and gets in fights a lot, and generally maintains a street punk facade. His shadow is an entirely different story. Shadow Kanji is essentially a homosexual stereotype: feminine, flamboyant, speaks with a lisp, hangs out in bathhouses. It’s very unexpected, based on Kanji’s demeanor, and he seems to find it very embarrassing and offensive. Unsurprisingly, he denies that the shadow is really a part of him.

Then Shadow Kanji changes, taking the form of a massive, muscular dude, decorated with roses and wielding two huge, metal male symbols as weapons, with two other bodybuilders at his side for support. Whoa.

It’s extremely absurd, super awkward, and yet it was my favorite boss fight in the game. Having dealt with issues of sexuality and being in the closet myself, I sort of understood what Kanji seemed to be going through. It can be a very confusing time, with conflicting ideas in the media and from peers about how a person should or shouldn’t behave based on their gender. It creates this amalgamation of bad thoughts and confusing ideas, which could lead to something like Kanji’s shadow lingering in the back of one’s mind, which they try to hide and push back as far as possible so no one finds out.

Even though the shadow was an extreme, ridiculous example of those thoughts, it was still something I could relate to, which is why it left such a huge impression on me. This was the first time I’d played a game that tried to tackle these issues, and I really appreciated the attempt. 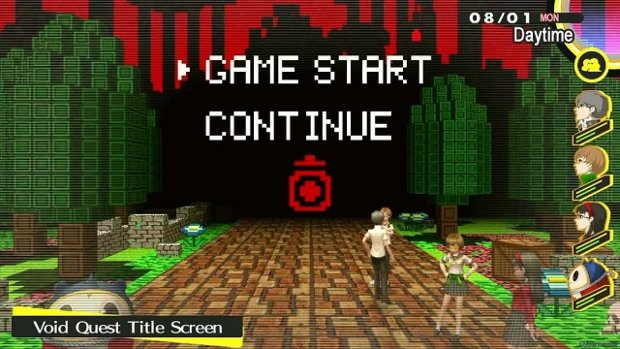 A game within a game

If there’s one thing Persona 4 lacks, it’s dungeon variety. Sure, there’s a bunch of different themed areas, like a bathhouse, a strip club, and a secret laboratory, but they all start to feel like palette swaps for the same basic dungeon layout after a while.

However, there was one dungeon that really stood out to me: Mitsuo Kubo’s Void Quest dungeon. Void Quest is built to resemble an 8-bit videogame, with chiptunes-inspired music and lots of little references to old JRPGs.

There’s so many neat little touches in this dungeon that I can’t help but enjoy myself while I’m wandering around the randomized floors. The entrance appears as a title screen, with the words “Game Start” and “Continue” hovering in midair. The doors open with this delightfully clunky animation and sound effect. On each new floor, Mitsuo’s thoughts read like text from an RPG, and he even “levels up” with attributes like “coolness increases by 3” and “emptiness increases by 8.” The boss fight against Shadow Mitsuo even plays out like an old 8-bit turn-based battle, with command menus that pop up whenever he attacks.

I could tell the level designers really had fun with this area, and it paid off. Even though it was basically still a palette-swapped dungeon layout like the rest (with the occasional unique floor which required puzzle-solving), it managed to be exciting and memorable just through style alone. 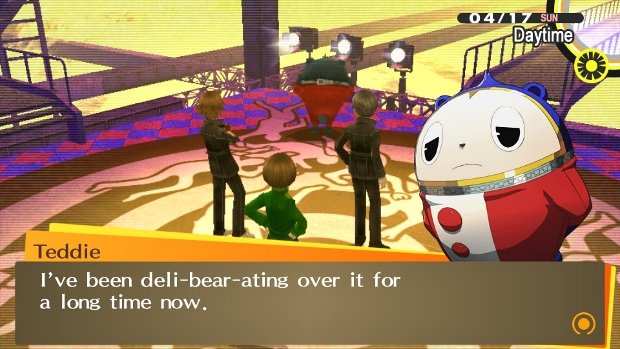 Teddie is so full of bear puns it’s almost unbearable. Every other line is “bear this” or “bear that,” but you just have to bear with it. He’s a beary useful member of the party, at least. You’ll bearly be able to keep up with his bear-sona bearing down on you. If he ever starts going bear-serk, you bear-ter watch out! God, these puns are awful (kuma)…

For real though, Teddie is awesome. Bear puns and all. 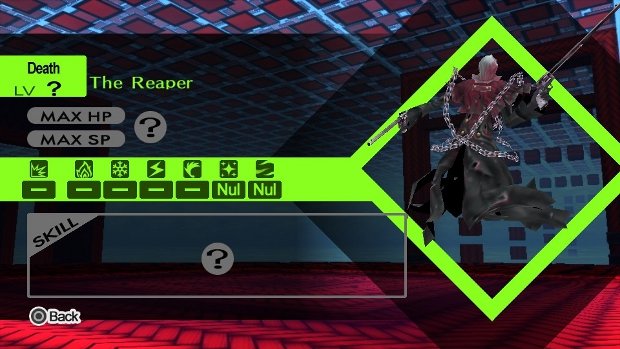 I had no idea the Reaper was a thing in Persona 4 until I randomly stumbled upon it during my second playthrough. While exploring Yukiko’s castle dungeon, I came across a suspicious chest. Upon examing the chest, a creepy message flashed across the screen: “You sense an intensely terrifying presence… open this box?”

I hesitated, but I was really curious about what that meant exactly, so I said yes. Suddenly, my navigator chimed in, warning me not to open it. It then prompted me again: “Will you really open it?” I was a little too nervous at this point. I expected something powerful and scary, and I hadn’t leveled up very much yet. I decided to walk away and try again some other time.

The next time I found the suspicious chest was in Mitsuo’s Void Quest dungeon. I’d leveled up quite a bit since the castle, so I decided to give it a shot and finally opened the chest. Out popped the Reaper, a creepy, masked monster covered in chains and tattered rags, wielding two revolvers with super long barrels. I loved his design, and his guns were like the coolest looking weapons I’ve ever seen. Unfortunately, he was way too powerful for me, and he quickly killed my entire team within a few turns. Well, so much for that…

I challenged him again in the Magatsu Inaba dungeon, and after an intensely difficult, grueling battle, I finally managed to defeat him! I was rewarded with the Blade of Totsuka, the protagonist’s strongest weapon.

I later found out it’s possible to challenge the Reaper multiple times, in order to get the most powerful weapons and armor for each character. I didn’t go through the trouble of finding everything, but I did at least get the best weapons for my three other main party members: Teddie, Kanji, and Chie. They definitely felt well-deserved, after battling such a formidable opponent. 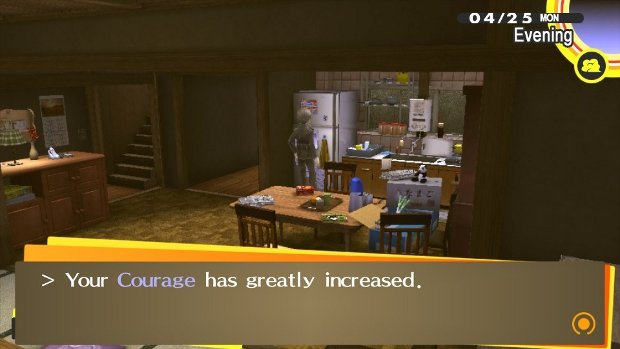 It came from the Dojimas’ refrigerator

There’s a lot of things to do in Persona 4 to spend time during the day or increase stats. One such activity involves raiding the refrigerator at home for snacks. Seems pretty straightforward, but the Dojima residence’s fridge is a mysterious thing.

Sometimes the protagonist will find normal things in the fridge, like melon soda or shortcake. But other times, he’ll find things that are quite worrisome… A pot full of grass? Unidentified mushrooms? An alarm clock?! He can also eat Nanako’s pudding, like a big jerk. Tasting these weird discoveries can raise his courage stat, but sometimes it’ll send him to bed sick, unable to do anything else that night.

The best part about the fridge finds is the wording, though, with prompts like, “A single slice of ham lies lonely on a paper plate. Something about it disturbs you…” and “There’s a brown spherical object in the depths of the fridge. You think it used to be a pear… Eat it?” I never knew what to expect when I opened the refrigerator door. It’s simultaneously frightening and hilarious. I’m not sure I’d be brave enough to eat anything that came from the Dojimas’ fridge after seeing some of the things they keep in there… 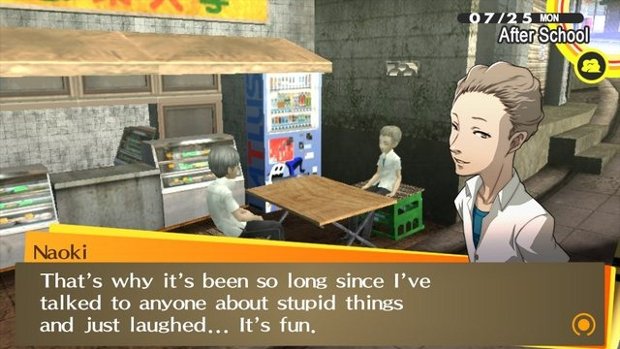 Helping out the hanged man

All of the Social Links are interesting, but I think my favorite one is the Hanged Man Arcana, Naoki Konishi. The protagonist’s relationship with Naoki starts off pretty rough. Naoki is the younger brother of Saki Konishi, who was one of the murder victims towards the beginning of the game. Still coping with his sister’s death, Naoki lashes out at the protagonist when they first meet, telling him quite plainly that he hates him.

Even though he came off as incredibly rude, I really felt bad for the guy. I kept trying to talk to him whenever I saw him in the hallway at school, even though he didn’t want anything to do with me. Eventually, he came around and decided to chat with me, and apologized for his previous rudeness.

Through Naoki’s Social Link, the player gets to learn about how someone might deal with the death of a loved one, how other people might treat that person, and how their behavior and gossip can make the mourner feel alienated. I felt a lot of empathy for Naoki and just wanted to make him feel better by being there for him and lending an ear to listen to his troubles. Towards the end, he’s finally able to let loose and cry, and share some fond memories of his sister, and he thanks the protagonist for being so friendly.

It’s a really sad story, but sometimes the saddest moments are the ones that stick in your mind the most. That’s why Naoki’s Social Link was by far the most memorable to me.