Hey Mario! We got a letter from Princess Peach!

This entry is all about Paper Mario. Feel free to share some of your own favorite things about the game in the comments! 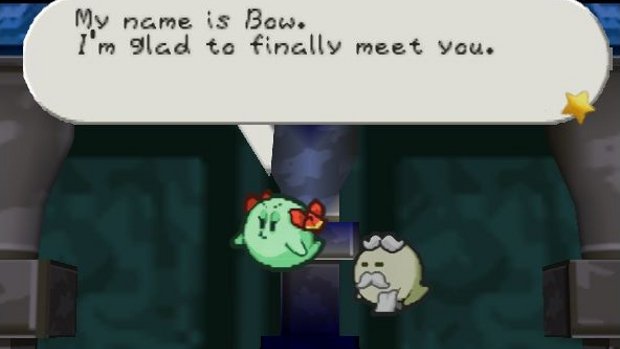 In Paper Mario, Mario gains the loyalty of several monster partners who join him on his adventure. They’re all pretty cool, especially Goombario the Goomba, Watt the Li’l Sparky, and Lakilester the Lakitu. I always like Bow the best, though.

Lady Bow is a snooty green Boo with red bow ties. She looks calm and friendly, but she can be quite terrifying when she needs to be. She joins Mario’s party in order to save her fellow Boos from a monster that’s taken a liking to munching on ghosts. Mario actually gets to witness the horrific act firsthand, as a poor Boo is unceremoniously gobbled up by Tubba Blubba. I wonder what a ghost tastes like, and how you would even go about eating one…

Bow aids Mario by allowing him to turn invisible to avoid enemy detection, and also to dodge attacks during battle. The main reason I like her so much, though, is because of her normal attack. She disappears and then pops up right in front of an enemy and slaps the ever-living crap out of them, causing them to spin around like crazy. Her most powerful attack is even a variation of this, where she uses a fan instead of her hand to smack foes around. It’s very satisfying and never ceases to be amusing. Just make sure you don’t get on Bow’s bad side! 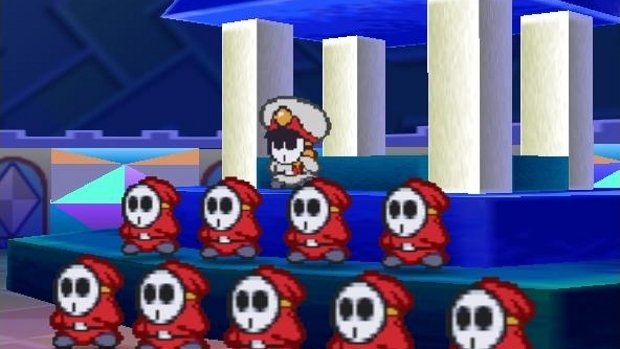 General Guy and the army of cuteness

Shy Guys have always been my favorite Mario villains. Ever since I played Super Mario Bros. 2 as a child, I’ve been enamored with the hooded little guys. So obviously, when I discovered Shy Guy’s Toy Box in Paper Mario, I got super excited. An entire level devoted to Shy Guys? Amazing!

I can’t even begin to describe how happy Shy Guy’s Toy Box made me. There’s dancing Shy Guys, camouflaged Shy Guys, Shy Guys on stilts, Shy Guys on fire… they’re all so cute and ridiculous! Plus, there’s Gourmet Guy, who is severely overweight but surprisingly agile. He’s great.

The best part, though? The boss fight against General Guy and his army of minions. Wading through the sea of Shy Guys in the dark and watching them squeal and scurry away when Watt lights up the room never gets old. And General Guy in his adorable little military uniform and toy tank is just too much to handle. I really enjoy the battle theme, too. It’s got that military undertone while still being silly and upbeat.

Honestly, there was no way this wasn’t going to be my favorite boss fight. It’s just too bad Mario never got a Shy Guy partner… 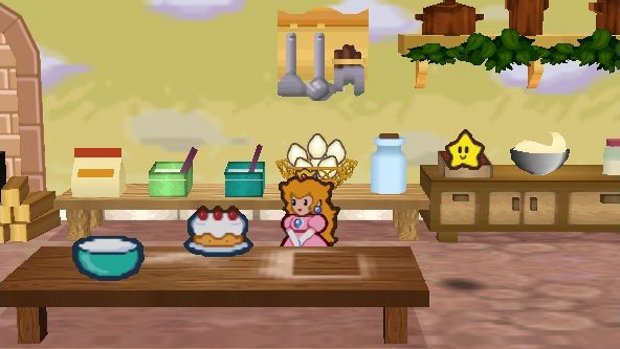 Mario isn’t the only playable character in Paper Mario. Princess Peach gets some time in the spotlight during interludes where she sneaks out of the room that Bowser is holding her hostage in to try and gather information to aid Mario on his journey. Peach’s stealth sections were actually pretty fun, and included one of my favorite scenes in the game.

At one point, Peach enters a room to find Gourmet Guy, the overweight Shy Guy that Mario met earlier. He agrees to keep Peach’s escape a secret on one condition: she has to cook something really yummy for him. And so, Peach decides to try baking a strawberry cake. Hilarity ensues.

In the kitchen, Peach has access to a variety of delicious cake ingredients, including the essentials, like eggs, butter, flour, and sugar, but also other things a normal kitchen would have, like salt, water, and cleanser. Twink gives step-by-step instructions to make the perfect cake, which are easy to follow. But that wouldn’t be very fun, now would it?

I honestly spent a little too much time at this point in the game experimenting and making the nastiest cakes possible. Of course, we’re using the word “cake” very loosely here. Would a saltwater and butter concoction topped with raw egg and strawberries really be considered a cake? It sure turns out looking like a cake somehow. And baking cleanser into the cake is fun and potentially poisonous and all, but why not go the extra mile and just make a cake out of nothing but cleanser? Cleanser mixed with cleanser, then baked and topped with more cleanser? Delicious! And magically cake-shaped!

I wish Gourmet Guy had more than one reaction to poorly baked cakes, but unfortunately his only response is to accuse Peach of learning to cook in truck driving school. You’d think eating a caked made entirely out of cleaning products would elicit a much more extreme reaction, bodily or otherwise. 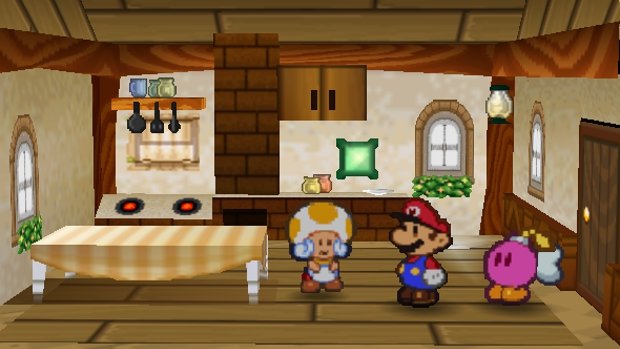 Peach had her fun baking a cake, but Mario can do some cooking of his own also. Well… sort of. Really, he just brings ingredients to a Toad named Tayce T. (har har), who does all the cooking for him. Perhaps Mario is incompetent in the kitchen.

I found the Tayce T. sidequest to be unexpectedly fun. Whenever I found a new ingredient, I would always hold on to it just to see what she’d cook up. Once Mario gets the cookbook from Gourmet Guy and gives it to her, she’ll be able to cook with two ingredients, opening up way more possibilities. I enjoyed experimenting with stuff and trying to figure out the different recipes, all 50 of them.

What can she make with this lime and this pasta? Can she use this weird leaf I found, or this sheep? How many dishes can she possibly make out of mushrooms? I felt compelled to try everything!

She can make some really useful items, like Deluxe Feasts which recover 40 HP and FP, and Jelly Pops which recover a whopping 64 FP. Cooking can be very rewarding! Although if an incorrect combination of ingredients is used, Mario will have wasted some perfectly good items and be left with a Mistake, granting only a single HP and FP. Oops…

Who would have thought a simple ingredient-mixing sidequest would be so enjoyable? 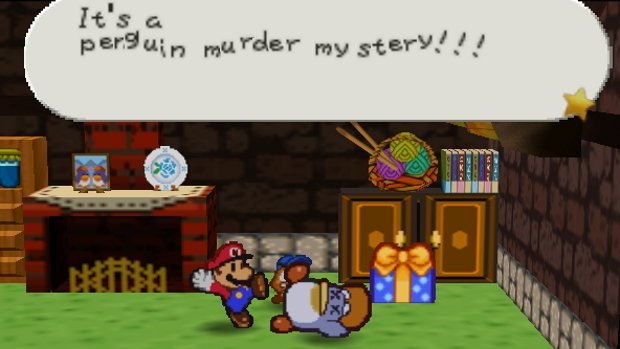 Remember that time Mario was accused of murder? And not just murder, but penguin murder! The crime happens in Shiver City, a quiet town inhabited by friendly, adorable penguins, the last place you would expect a murderer to strike.

Mario is invited into the home of the penguin mayor, whose wife leads him into the living room to meet with her husband. Mario enters the room to find… a dead penguin body?! He finds a note with the word “Herringway” scrawled upon it lying near the body, when the mayor’s wife pops in to find her husband dead on the floor.

Obviously, she thinks Mario did it, and who wouldn’t? He’s a stranger after all, alone in the room with the mayor. Mario is innocent, of course, and to prove it, he goes out in search of the real killer. The most suspicious individual is a local penguin novelist named Herringway, who has locked himself into a hidden room in his house to work on his latest mystery novel. Once Mario accesses the room and confronts Herringway, they all make their way over to the mayor’s house to sort things out.

Herringway claims he didn’t do it, since he and the mayor are friends. The mayor’s wife still thinks Mario did it (she’s pretty rude about it, too!). As they’re discussing the matter, the mayor’s body suddenly begins to twitch, and all of a sudden he springs back to life. A zombie penguin?! Nope… turns out he just fell and hit his head while trying to grab a gift for his friend, Herringway (did nobody think to check his pulse?). Mystery solved!

It’s weird to think about murder in a game like Paper Mario, and in a town populated by cute penguins no less. Although, Mario does stomp Goombas and Koopas on a regular basis; he’s no stranger to killing things. Maybe the penguin murder scenario wasn’t so far-fetched… 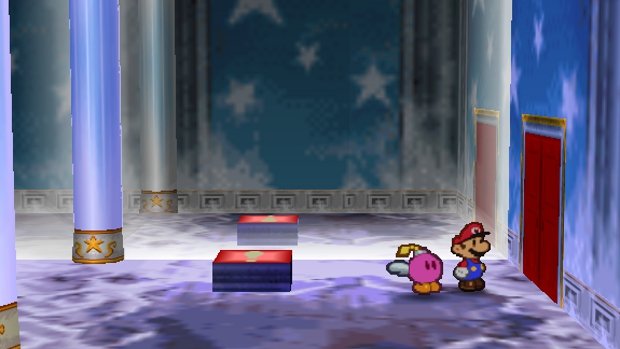 Outside of Shiver City lies the Crystal Palace, a place full of mind tricks. The palace appears to be built with wall-to-wall mirrors, and it’s quite beautiful. But something is a little off about the mirrors; certain things don’t have reflections like they ought to.

These mirrors become the main puzzle element of Crystal Palace. What looks like a reflected room might actually turn out to be an entirely separate room, an exact duplicate of the one Mario is standing in. Mirrors without reflections turn out to be entrances to walk through. Sometimes even the actual reflections themselves can’t be trusted.

As it turns out, there actually aren’t any real mirrors in the palace at all. Mario’s reflections are really enemies called Duplighosts, who are so good at imitating things that they can predict their every movement. Once they are exposed and defeated, the palace’s “mirrors” are revealed to be nothing but glass walls.

The Duplighosts’ tricks don’t end there, though. They continue to impersonate Mario and his allies, appearing in hordes to try and confuse Mario into hurting his own friends when he can’t figure out which is the real Bombette. The Duplighosts start to lose their edge, though, revealing themselves through weird speech quirks and eventually failing to copy appearances at all. It’s actually really funny seeing them try so hard to trick Mario and failing utterly.

The Crystal Palace is designed so well that it’s almost astounding. The visual trickery is really neat to watch. What I thought were mirror puzzles turned out to be puzzles of symmetry, where doing certain things in one part of the palace would cause the opposite side of the palace to change as well. It was all balanced so perfectly, and I was incredibly impressed with the level designers when I finally figured out what was going on. What a terrific chapter!