Strawberry on the shortcake!

This entry is all about No More Heroes. Feel free to share some of your own favorite things about the game in the comments! 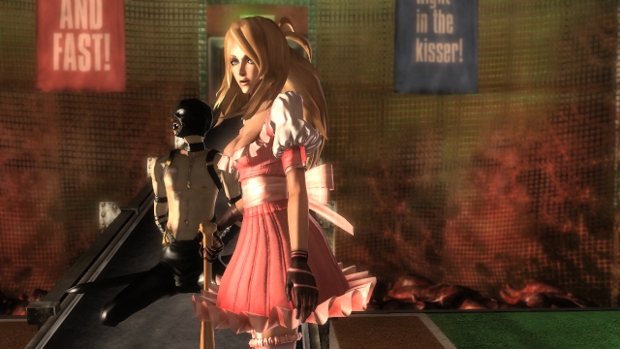 You’ve been a bad girl

Bad Girl, the second highest ranked assassin: a cutesy, foul-mouthed, beer-chugging psychopath who definitely lives up to her nickname. Travis first finds her beating random dudes in gimp suits to a bloody pulp with her wooden baseball bat, just for fun. She’s insane and incredibly dangerous.

After tossing back a few beers, she challenges Travis to a duel with nothing more than a bat against his deadly beam katana. She can certainly hit hard with that thing, though. Even her standard attacks hurt like hell, so watch out.

After a while, she starts using those gimp dudes she was smashing earlier as projectiles, hitting them home run-style right at Travis like giant, living baseballs. She even takes a second to drain a flask she was hiding in her dress, spitting the alcohol onto her bat and lighting it up in flames like a badass.

Don’t be fooled by her occasional daintiness, either. She likes to fall to the ground and pretend to cry, which may seem like a good opportunity to slash her up, but for the love of God, don’t fall for that trap! If Travis even so much as approaches her at this point, she’ll trip him over, jump on top of him, and proceed to beat his face into the ground with her bat. It’s an instant kill…

Bad Girl is hard as hell, and she killed me too many times to count. But everything about this fight is amazing. Her frighteningly cool demeanor which clashes with her frilly style, the sinister atmosphere, the thumping battle theme which sounds like something from a seedy, super threatening strip club… it all fits so well together. It may be frustratingly difficult, but it’s still my favorite fight in the game hands down. 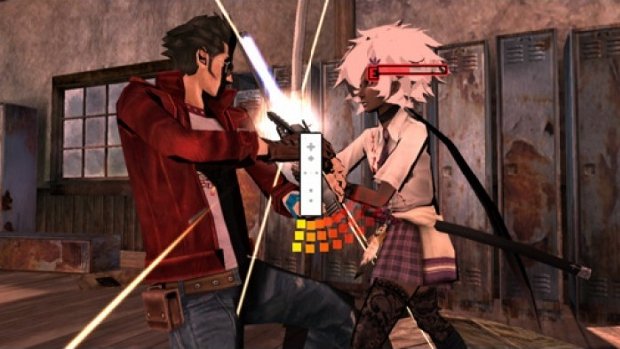 One of the most surprising things about No More Heroes for me was just how great the motion controls felt on the Wii. I think I can honestly say that this is the only game I’ve played where I actually enjoyed the motion controls and felt like they added something to the game.

Probably the biggest reason they work so well here is because they’re specifically relegated to special attacks. The A button is used to attack normally, so players don’t have to swing the controller every which way constantly during combat, looking like a fool. Waggle is required when Travis locks swords with an enemy, and the Wiimote and nunchuk are swung around while executing wrestling moves. But the best feeling is when Travis kills an enemy with a finishing blow. The grand slashing motion paired with Travis shouting, “go to hell!” actually feels really great to perform.

And of course, who could forget the motion for recharging the beam katana? Players basically have to jack off with the Wiimote, while Travis does the same thing with his sword on-screen. Ahhh… stay classy, Nintendo! 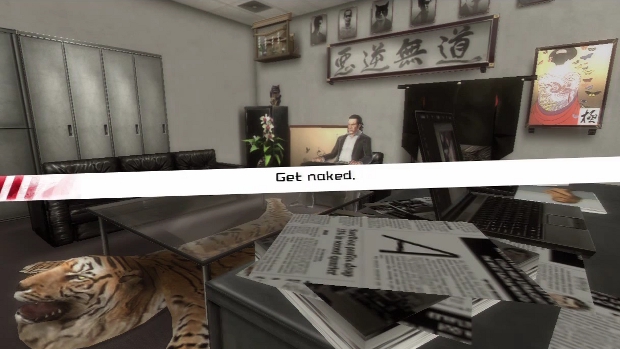 When he’s not busy slicing up assassins or working to pay for his next big thrill, Travis likes to spend his free time at the gym. Gotta stay fit to pull off those sweet wrestling moves, right? That’s why it’s usually a good idea to visit the Thunder Ryu building on occasion and lift some weights. Something is a little off about this gym, though…

Upon entering the building, the owner, Thunder Ryu, makes some rather unsettling demands of Travis. “Take your clothes off. OFF! I will teach you THAT technique. Make sure your ass’s clean.” I uhh… what?! I… I think I’m in the wrong place…

If Travis agrees to do “THAT” training, he’s taken to the gym room, where he can lift dumbbells, bench press, or do some squats (What? That’s it?). These exercises will increase his combo time, strength, or vitality, so they’re quite useful. Of course, it’s probably not what anyone was expecting, based on gym owner’s greeting. 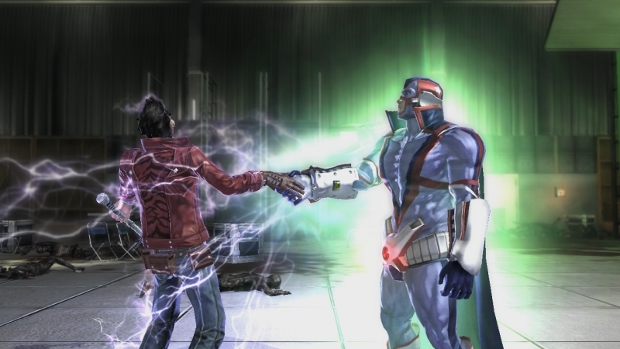 No More Heroes is all about the boss fights, so it’s hard to pick just one to talk about. There aren’t really any bosses from the first game that I dislike. Even though Bad Girl is definitely my favorite, there still plenty of other awesome assassins like Shinobu, Holly Summers, and Speed Buster (special shout-out to her theme song, Mach 13 Elephant Explosion, for having the coolest track title of all time). But there’s one boss that always makes me laugh.

The seventh ranked assassin is an angry jerk who works for the postal service, although his true persona is the idiotic supervillain known as Destroyman. He employs underhanded tactics to try and get ahead, like attacking Travis when he has his back turned and electrocuting him when they shake hands. What a dick.

Destroyman has a partly annoying, partly humorous tendency to shout the names of his attacks as he’s about to use them, so during the entire fight all you hear is, “Destroy spark!” “Destroy cannon!” “Destroy beam!” At least he gives fair warning this time, I suppose! He also has a super deadly attack called “Destroy buster” which fires a massive laser beam right out of his crotch. After he uses this attack, he starts laughing like an imbecile, giving Travis plenty of time to smack him around a bit for firing crotch lasers at him. Oh, and don’t forget the nipple machine guns he uses right before Travis kills him. This guy has the best attacks.

Aside from being an absolutely ridiculous battle, I think the best part about the Destroyman fight is just how good it feels to beat this guy up. I mean, he’s constantly acting like an asshole, so he kind of deserves it. Plus, he occasionally lets out the silliest, high-pitched screams whenever he gets hurt. It makes me laugh every time. 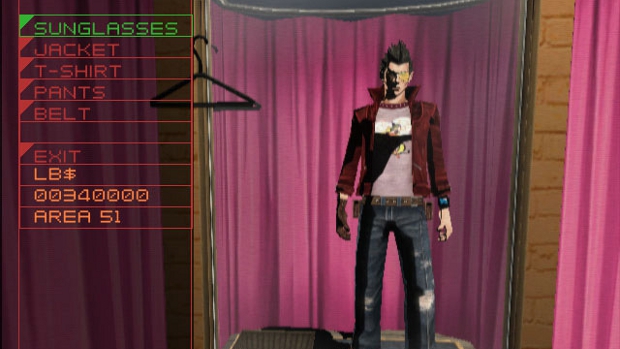 I wish I had Travis’s wardrobe. He has so many cool t-shirts that I could easily see myself wearing in real life: the giant squid, the luchador masks, the weird doodle designs and logos, the king stag beetle (actually, I really did buy a shirt with the beetle design on it!). He can keep the anime girl shirts, though. Those are a little much.

The craziest part about his clothing, however, is that he finds most of his shirts in dumpsters. Travis can also buy new clothes at the Area 51 store, but they’re a bit pricey, and dumpster shirts are free! Not to mention some of the dumpsters are apparently full of money, so he’s getting paid and expanding his wardrobe at the same time. 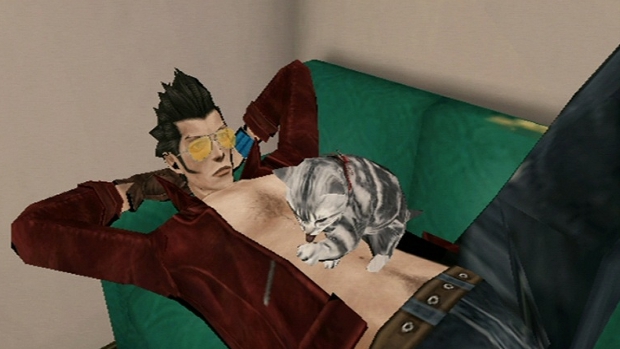 Is there any better way to unwind after a tough day of slashing up thugs than by playing with fluffy, adorable kittens? No. There is no better way.

While resting at his apartment between jobs, Travis can choose to spend time with his tiny kitten, Jeane. He can feed her, tease her with toys, pet her, or nap with her on the couch, while Jeane lets out the cutest little mews. There’s no real benefit to playing with Jeane; it’s purely therapeutic. That didn’t stop me from cuddling with her at every possible opportunity, though, because “oh my gosh KITTY!”

There’s also a side job that Travis can take called “Meow Meow.” The job involves catching runaway kittens by distracting them with foxtail and grabbing them when they pounce, all the while listening to a ridiculous song featuring a man meowing in a deep, seductive voice. If that’s not the best job in the world, then I don’t know what is! 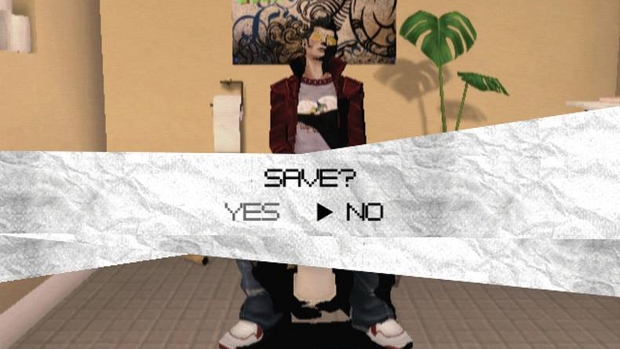 I like when developers think of creative ways to implement game saving, rather than just going to a plain old menu. There are many great examples of unique saving mechanics in other games: contacting Mei Ling in Metal Gear Solid, sitting on the couch with Yorda in Ico, calling your dad in EarthBound…

Saving in No More Heroes is the best, though. The option to save becomes available whenever Travis goes to the restroom and sits on a toilet. It even shows him pulling down his pants, as a bunch of toilet paper rolls by to cover up his junk. It’s so unexpected and hilarious, and somehow brilliant. Many people use their bathroom time as a chance to relax and reflect for a moment, so it makes sense that Travis would do the same, recording his memories of all the crazy shit he’s been up to.

Apparently, Suda51 actually came up with the idea for No More Heroes while he was on the toilet himself, so that’s how the toilet-saving mechanic became a thing in the first place. And I’m sure it’s not just Suda51 coming up with great ideas in the bathroom. Imagine all the world’s creators and inventors, who probably came up with a lot of the stuff we use and think about every day while they were pooping. That’s just science.