This entry is all about Catherine. Since today is Valentine’s Day, I figured I’d pick a game that’s all about love, sex, and relationships (and also cheating… uhhh…). Feel free to share some of your own favorite things about the game in the comments! 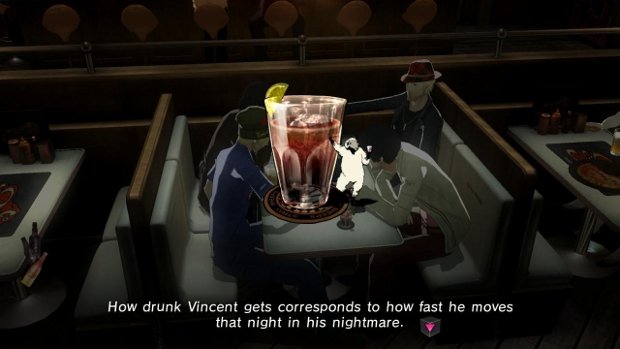 Drink and be merry

Every night at the Stray Sheep, Vincent has the option to get borderline blackout drunk at the bar. You can order cocktails, sake, beer, and whiskey. Or you can order one of each. Or 50 of each. Drinks are free and the bar apparently has an unlimited supply, so go crazy!

Surprisingly, drinking only has positive effects on Vincent. Alcohol makes Vincent move faster in his nightmares, which is very useful since the puzzles are on a time limit. It’s always a good idea to drink yourself into a stupor before taking on the block towers of your dreams.

Too bad alcohol doesn’t work that way in real life. If I drank as much as Vincent did in my game, I’d be dead. Even if I drank a fraction of what he did, I’d still be waking up in a puddle of my own sick on the ground outside of my apartment, if I even made it that far. Let alone the hangovers… does this guy even get hangovers? What is his secret?

All of the music in Catherine is great, but the best tracks are definitely the songs that play during the block puzzle segments. Composer Shoji Meguro used classical music arrangements for the soundtrack, remixing them with his own style to create these really nice modern takes on classic compositions.

Some of my favorite classical scores are featured, such as “Mars” and “Jupiter” from Holst’s The Planets, Bach’s “Little Fugue”, and Chopin’s Revolutionary Étude. The soundtrack also introduced me to some great music that I hadn’t heard before, but which quickly became favorites of mine, including Mussorgsky’s “The Hut on Fowl’s Legs” and Dvorak’s New World Symphony.

I don’t know how much average gamers these days know or care about classical music, but I’m glad that there are still avenues through which young people can be exposed to the classics. You’ll occasionally hear classical arrangements in other games as well, like Tetris, Mega Man Legends, and Earthworm Jim. I always appreciate a good reference to the great composers of the past. 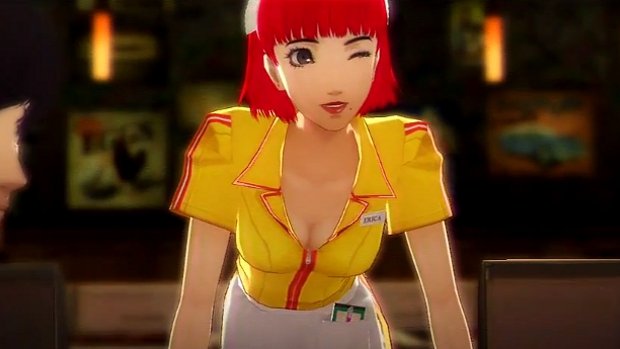 Another round of drinks, Erica!

Erica is a waitress at the Stray Sheep. She’s a childhood friend of Vincent and his buddies, and loves gossiping with the group. She also has a weird Ronald McDonald color scheme going on, but that’s okay. She’s way cooler and way less creepy than Ronald.

Toby, a recent addition to the group of friends, has a pretty big crush on her. It’s no wonder why; Erica is always super kind and charismatic, and attractive to boot. Eventually, the two get together for a night of passion.

At the end of the game, if you get the True Lover ending, it’s revealed that Erica used to be “Eric” back in the day. This comes as a huge surprise to Toby, but rather than getting all freaked out or weird, he just sort of jokes about it in a friendly way. The rest of the guys obviously already knew this about Erica, since they were childhood friends, and they treat her normally during the entire game. There are also a few subtle hints about the revelation at various points during their conversations.

I think it’s great to see a transgender character handled so respectfully in a videogame. Her gender identity is revealed in a natural way, and it’s treated like a perfectly normal aspect of everyday life. She was my favorite character in the game, even before I learned about her past. 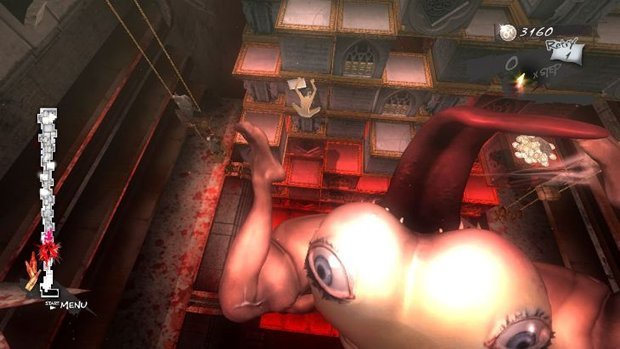 Most of the bosses in Catherine represent aspects of Vincent’s relationships that he worries about during the day. The Fist of Grudge symbolizes Katherine’s controlling personality and Vincent’s fear of commitment. Doom’s Bride alludes to Vincent’s uncertainty of marriage. The Child with a Chainsaw implies Vincent’s apprehension about having a child.

And then there’s the Immoral Beast. The beast takes the form of a gigantic butt with legs that tries to kill Vincent. It has a mouth with a huge tongue that waggles all about, and blue eyes that resemble Catherine’s on each cheek. It appears in Vincent’s nightmare after he has an affair with Catherine.

It’s pretty clear that the butt beast represents Vincent’s shame due to the affair, but it seems like it’s also telling us something more about the specifics of their sexual encounter. Catherine even comments the next morning that she’s never done something “like that” before. I’m sure you can all use your imaginations to deduce what that means. Regardless, the Immoral Beast is one of the most bizarrely grotesque bosses I’ve ever encountered in a game, and I can’t help but admire that. 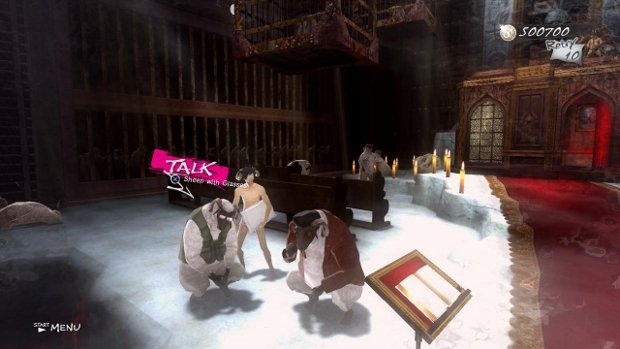 Those who haven’t played Catherine might not know that most of the characters in the game are sheep. Well, technically they’re men, but in the nightmare world they appear as sheep to everyone but themselves. That means, to all the other guys, Vincent appears as a sheep wearing polka dot boxers.

The sheep-men are all so freaking cute, especially since many of them are dressed up like people. One sheep is wearing a tie, another one has a cool jacket and glasses, one has a pompadour hairpiece or something, and another one’s got a police hat and nightstick and is a little larger around the belly (he’s my favorite). Most of them represent male characters from other parts of the game.

Their outfits are a little strange, though. Like, shouldn’t they be dressed as though they’re in bed, like Vincent in his boxers? Does that means Morgan, the policeman, sleeps in nothing but his hat and nightstick? And some of the others sleep in their jackets? That’s kind of weird, but I guess it’s possible. I mean, hey, whatever’s comfortable. I’m not here to judge! 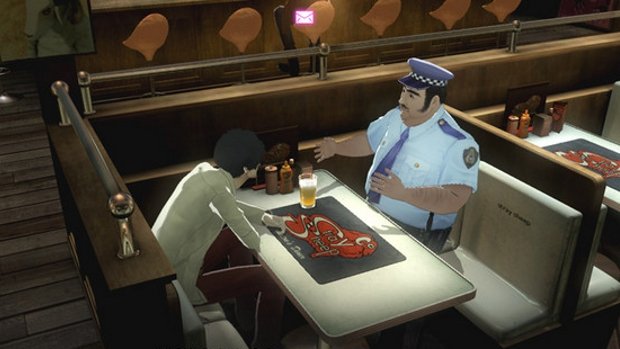 Saving lives one conversation at a time

If you make a habit of talking to the various bar patrons at the Stray Sheep, you’ll start to recognize some of them as the sheep you meet in your nightmares. The more you talk to them, the more you learn about their love lives and why they’re being haunted by these bad dreams. You’ll find that most of them are rather depressed and worried about the way they’ve been treating the women in their lives.

By speaking with them regularly and answering their questions, you’ll give them hope and more incentive to stay alive in their nightmares. On the flip side, if you ignore them or give them unsatisfactory responses, you may notice that they stop showing up to the bar at night and you won’t see them in your dreams anymore. This means they’ve lost the will to go on and died in their sleep. How awful…

The most touching story to me was that of Morgan the police officer. You learn that his wife was killed a long time ago by a criminal he had been investigating. He blames himself for her death, especially since they had a fight the day she died, and the last thing he said to her was, “Get out.” His depression has left him with suicidal thoughts. The reason he’s been having nightmares is because of his tendency to lead women on with no intention of a relationship, which he sort of views as cheating on his deceased wife.

If you help him stay alive, he decides to focus on finding his wife’s murderer so he can finally enact justice. All of the other men’s endings involve them asking their girlfriends to marry them, or trying to make things work with their wives, which is great. But Morgan just wants to avenge his wife so that he can visit her grave and tell her all about what he did. I always thought that was really sweet of him.