Thy next foe is…

This entry is all about Shadow of the Colossus, one of my favorite games of all time. Feel free to share some of your own favorite things about the game in the comments! 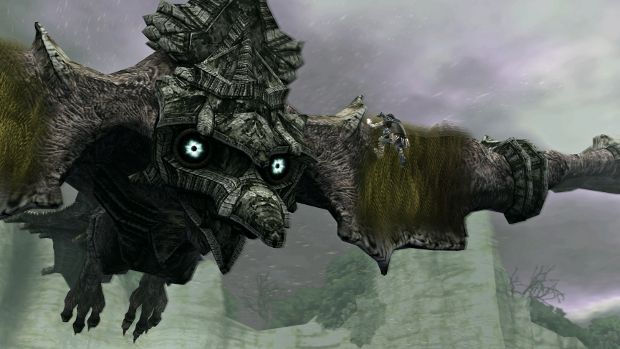 Let’s start things off with my favorite Colossus, Avion! Avion is the fifth Colossus you fight. It’s a giant hawk-like Colossus with a long, trailing tail, and it makes its home above some ruins which have been flooded to form a lake.

The first thing you’ll need to do during any Colossus battle is figure out how to climb onto it. Since Avion is either flying around or sitting perched high atop a tower, this makes things difficult. The only way to reach Avion is to get it to come closer to you, which means disturbing the peaceful creature by shooting arrows at it to get its attention. With its feathers ruffled (well… I guess it doesn’t actually have feathers, does it?), Avion flies into the air and goes into a dive, heading directly towards you!

What happens next is one of my favorite moments from a game ever. Your first instinct when you see a giant bird diving right at you would probably be to jump out of the way. I mean, that thing could kill you! But wait… if it’s diving at me, then it’ll get close enough to jump onto it, right?

As the giant bird rushes you, the choice becomes obvious. Rather than move away, you jump towards Avion, meeting the bird in midair and grabbing hold of its wing as it rises back into the air, where it proceeds to flap and corkscrew through the sky, trying to shake you off. Then you’ll have to carefully move around its wings and tail, looking for weak spots to stab, all while speeding through the air several meters above the ground and trying desperately not to fall off and into the lake below. It’s one of the most exhilarating moments from a game that I can think of! 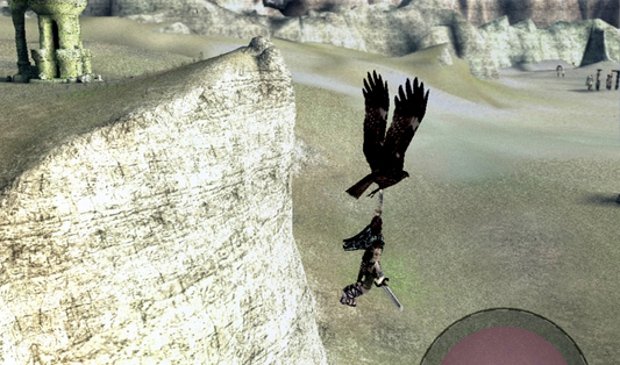 Speaking of flying around on birds, there’s actually another way to get Wander soaring through the sky (aside from Phalanx, the other flying Colossus, who is awesome). You’ll probably notice some hawks flying around while you’re riding across the Forbidden Lands on your horse, Agro. Ever wonder why they’re flying so close?

You’ll most likely just ignore these hawks (or try to shoot them down with arrows, if you’re mean!), but there is a way to interact with them that you probably wouldn’t expect. If a hawk soars low enough, Wander can actually jump up and grab hold of the hawk, and the bird is somehow strong enough to carry Wander’s weight as it escorts him a short distance, slowly drifting towards the ground. You can do this by jumping off of Agro once the hawk flies close enough, and there are also a few areas where you can climb on top of a rock and jump up to grab a hawk as it passes by.

The inclusion of this mechanic is bizarre. It doesn’t really serve any purpose other than the simple fact that you can do it. It’s so weird and unexpected, though, that I can’t help but love that it exists! 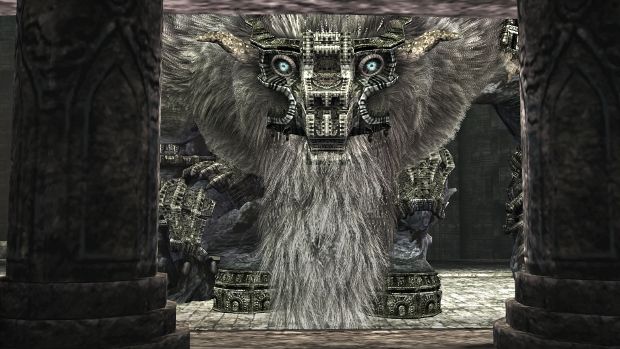 I feel like the sixth Colossus, Barba, doesn’t get much attention whenever this game is being discussed. It’s one of the many bipedal Colossi you have to fight, and it may not seem too special at first glance, especially when compared to some of the others. However, the method in which Wander climbs onto him is actually one of my favorite moments in the game.

Everyone probably knows Barba as the bearded Colossus, and for good reason. In order to climb onto him, you must lure him to the back of the temple and hide under a small overhang. Since Barba is so tall, he’ll have to bend down to look into the alcove you’re hiding in, waving his big, shaggy beard around as he tries to locate you.

As soon as he did this, I knew exactly what I had to do, and I laughed out loud. I ran towards him, jumped, and grabbed hold of his beard as he stood back up, using his facial hair to climb onto his shoulder. As an owner of a beard myself, this part of the game was really funny to me. I kept imagining what it would feel like to have some little dude climbing up my beard, and it just made me smile. If I were Barba, I would’ve just combed Wander out of there. 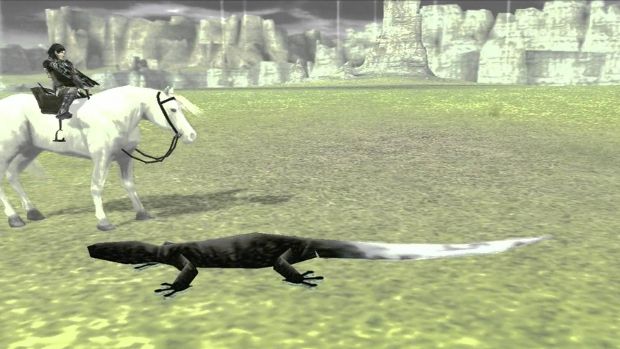 The flora and fauna of Shadow of the Colossus is sparse. There’s so little of it that when you do come across an animal or a lone tree on your way to find the next Colossus, you can’t help but stop to look at it. Like, whoa, there are actually living things in this world apart from myself?

Even something as insignificant as a tiny lizard will immediately catch your attention. If you try to pick it up, you may accidentally kill it with your sword (oops, sorry little guy!), leaving behind a sliced off tail that just sits there as the rest of the lizard disintegrates. Weird. Might as well just eat that tail, I guess. (Wander is a strange dude.)

So you ate the lizard tail, but nothing seems to happen. Why would they even put this in the game? Well, there are two types of lizards in the Forbidden Lands: regular black lizards and white-tailed lizards. If you happen to find a white-tailed lizard, kill it, and eat its shiny white tail, you’ll notice your stamina gauge will glow slightly for a bit.

The game doesn’t really tell you what that means, but the lizard tail essentially boosted your stamina, so now you can hold on to Colossi a bit longer without falling off. You can also find fruit in the scattered trees and bushes which will boost your health. I kinda like that the game doesn’t ever explain this to you. It makes it feel like you discovered a secret, and it’s reassuring to know that your exploration of the relatively barren wasteland wasn’t completely fruitless. 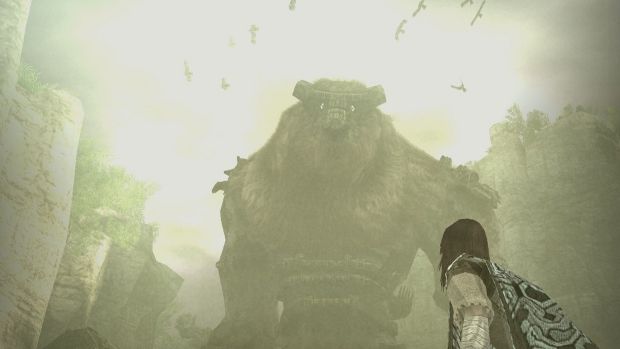 Aside from the lizards, there’s another hidden feature in this game that I happened upon by accident. During maybe my second playthrough, I was making my way to the fourteenth Colossus and took a path through the geyser field when something caught my eye: a sort of mound or something that hadn’t been there before. When I got closer, I realized it was the remains of Basaran, the ninth Colossus, which I had killed previously. Basaran’s corpse had begun to decompose into rock and rubble, blending in naturally as if it had become just another feature of the environment.

This discovery took me by surprise, because I didn’t realize before that the bodies of the Colossi stayed behind and became a part of the world. I thought that was a really neat touch. I climbed around on Basaran for a bit, and then went to visit some of the other defeated Colossi. When I got to Avion’s remains, I absentmindedly hit a button which made Wander bend down in prayer. A text box popped up that said, “Begin Reminiscence Mode?” I didn’t know what that meant, but I said yes anyway.

And then I got to battle Avion again, with a sepia-toned, old film-like filter over the screen. I thought this was the coolest thing, and I went back and fought all of my favorite Colossi. There’s no real benefit to be gained from fighting them again, but I thought it was a neat addition nonetheless. 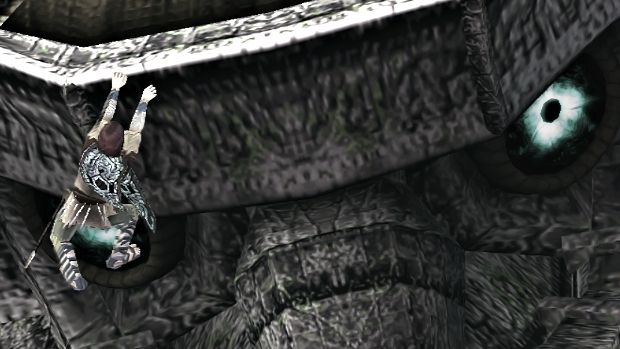 Did you ever have those moments where you’re on top of a Colossus, doing great, when the Colossus jerks suddenly and flings you off, and as you’re falling, out of sheer panic you desperately jam down the grab button and manage to grab hold of a leg or something at the last moment? God, that always felt so amazing!

This happened to me a lot while fighting Gaius and Malus, and some of the other more vertical Colossi. It was always such a relief during the encounter with Malus, the final Colossus, because having to start all over from the ground in that fight can be such a pain. It takes forever to get back up to his head. But being flung from the top and grabbing onto his hand or shoulder blade as you’re falling through the air just feels incredible, and looks really awesome too! 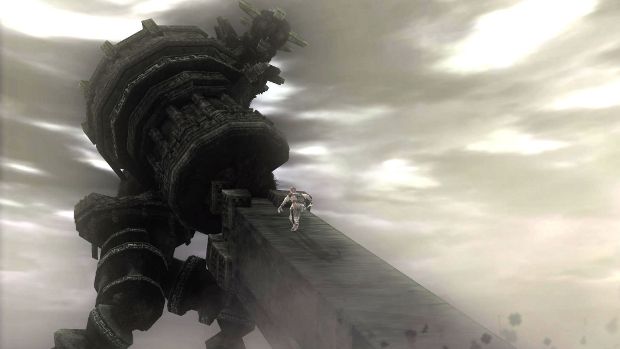 Speaking of moments that feel incredible, there’s a move that I learned and perfected for beating Gaius in Hard Time Attack which made me feel like the biggest badass ever. The technique is called the “sword jump.” It requires you to jump at just the right moment while standing on Gaius’ sword as he pulls it up out of the ground, so that the momentum flings you sky high, allowing you to jump right up to his shoulder, or even his head, without having to climb. Pulling this trick off definitely feels as cool as it sounds!

Simply beating Gaius in Hard Time Attack is no easy feat. You only get 5:00 to take him down, and given that you normally have to wait for him to break his armor, then get him to swing his sword down so you can climb it and up his arm, you aren’t left with much time to actually attack him once you finally get to his weak spots (which there are three of in Hard Mode).

You can probably beat it the normal way if you’re lucky enough to find those sweet spots where Wander never loses his balance while stabbing. But if you want to beat it somewhat easily, you pretty much have no option other than using the sword jump technique, because it means you won’t have to wait for Gaius to break his armor, and you won’t have to waste time climbing up his arm. This leaves you plenty of time to stab, stab, stab. Plus, when you finally pull it off, you’ll feel like the coolest dude in the world. So, win-win!